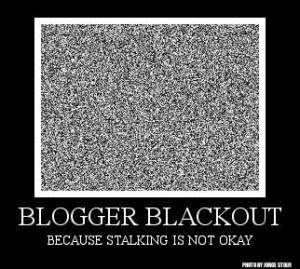 Anyone who has been on the internet for the last few days must have been aware of the Kathleen Hale stalking drama. If you are not fully aware, here are some excellent posts on the matter

Dear Author’s On the Importance of Pseudonymous Activity

Jenny Trout’s DON’T DO THIS EVER (An Advice Column For Writers): “Stalking The Hands That Feed You” edition

Love in the Margins also has an excellent Link Roundup

So I don’t want to repeat what has already been said excellently in so many other places - but I do want to say we have a problem.

It’s tempting, and reassuring, to decide that this is a “one off.” Except, it’s already clear that it isn’t. And, in some ways more worrying than these frightening stalkers themselves, we’re also seeing consent and approval for their actions. It’s not a “one off” (or a “two off” or how ever many off it turns out to be) when these actions are praised and celebrated by so many in our community.

That isn’t worrying - that is frightening. It is frightening that fans and authors respond to this report of outright stalking and made excuses for it - or openly praised it.

What have we become? And how much further will we take this?

This culture of attacking reviewers for criticism has been developing for a while - of which STGRB is perhaps the most visible manifestation of it. And yes, we must draw a direct link between Ms. Hale’s stalking and the wide acceptance of her actions if not directly to that group then certainly to the attitude that spawned them, not least of which because Ms. Hale herself referred to them. When STGRB first caused so much outrage with their campaigns against reviewers - including doxing, revealing reviewer’s names, addresses and work-places many of us spoke out against them - but equally there were many more willing to speak in favour of them and to their defence. There were many who were willing to join them in labelling negative reviews as “bullying” (a grossly offensive comparison that takes advantage of the high profile of vulnerable suicides that drew attention to bullying, especially of marginalised people) and in labelling criticism as “attack”. Authors like Anne Rice and Nathan Bransford spoke up in support of this characterisation, ignoring or tacitly accepting STGRB’s tactics (including doxxing and slandering reviewers with allegations of them being bad mothers, or having a drinking problem). News outlets like Huffpost Books further added credence to the idea that criticism was “bullying” and that the tactics of STGRB were either acceptable or negligible.

Many others said how inaccurate it was to characterise criticism as bullying. Many also said how dangerous their tactics were; they were inviting disgruntled authors and their fans to go to the reviewer’s homes, to their work places, to where their families lived, to take whatever revenge they deemed appropriate.

Many in the book blogging sphere warned that this could happen
And it has.

And rather than being a huge wakeup call - people cheered.

The Guardian gave Ms. Hale a platform where she could not only admit to stalking a bad reviewer - but where she could be proud of it, present it as funny and be praised for it.
And she was. Her actions have been accepted by authors like Anne Rice, literary agents like the Bookends Literary Agency and book related organisations like the Devil’s Kitchen Literary Festival. These are hardly alone - the list of authors and fans who have spoken up to praise and cheer Hale is terrifyingly long - let alone the even longer list of those who “understand” or “can sympathise” with Ms. Hale’s stalking and more who are determined to justify Ms. Hale’s behaviour.

I ask again - what have we become? And how far are we going to take this? Because a terrifying number of our community read an author’s account of stalking a critical reviewer and they reached for the pompoms


This needs to be a wakeup call. Rather than accusing reviewers of dishonesty for using pseudonyms, we should be blood ashamed that a section of our community is so toxic that pseudonyms are necessary for a reviewer to be safe.

Let this be the last warning bell, because otherwise I shudder to think what it will take for us to finally realise how badly

And at Fangs we will no longer be accepting any physical ARCs - only digital. Kathleen Hale’s actions and the rather terrifying support for her make it far too great a risk for ourselves and our families.