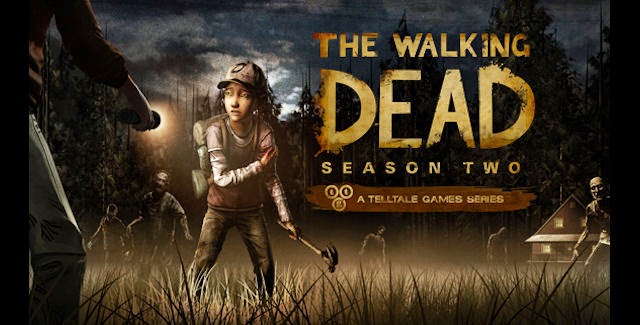 I went into this game with wariness – because I was trying to curb my enthusiasm. I loved season 1 of this game and that was causing majorly high expectations that I feared would just lead to disappointment. In many ways I was right to be wary as I wasn’t nearly as blown away by this as I was the first one – though it was still pretty excellent.

First we have a protagonist switch from Lee to Clementine – you now play as a 10 year old girl. In some ways this is excellent because Clementine is a brilliant character – tough and wise for her age, clever, resourceful determined – still a child but definitely someone who has had to grow up too fast. It shows in nearly every character interaction you’re part of and I can’t emphasise enough how well done this is or just how plain awesome Clementine is as a character. I would happily follow any numbers of stories of Clementine, the child who grew so fast, mix of compassion and ruthlessness and finding the balance between. I think this also really works well with the actual game because Clementine is, obviously, a 10 year old child played by an adult – so she’s a child with a (semi-) mature adult making her decisions and rather than being jarring it helps really build this hyper-mature character

It also allows you to explore a completely different dynamic as a child in this setting – something we don’t see a lot of. There are a number of scenes where you simply cannot help, where you’re not expected to help and when your decisions and the future of the group is so very much outside of your hands. There are several occasions when there’s a conflict happening and the best you can do is stay on the sidelines and beg ineffectually for people to listen or to, clumsily and equally ineffectually intervene. And while she does become much more effective at killing Walkers, for much of the game, lucky strikes and running is the best she can manage – while Lee could carve his way through packs. Even one of the core conflicts of the story – whether you are close to Luke or Kenny – is different from the same dilemmas Lee had to face because, on some level, you’re also choosing your primary care taker. And the choice is between a manchild who is less mature than Clementine in many ways or a rage filled man who can start and argument in an empty room. Personally I think Clementine was better off without either of them – because she’s awesome.

But there are downsides as well. As a child there are a lot of scenes where I feel like I’m on the sidelines and not that involved – there are some swathes of the game that feel more like a movie than a computer game because I have relatively little input to what’s happening. The flip side is, in terms of characterisation, I sometimes have a lot of input that may build Clementine’s character but makes me question the other characters. Why is a child the one with a deciding influence on this decision? Why are people asking Clementine’s advice? And the number of times we have a terrible dangerous task that only a 10 year old can do to save the group makes me ask where the applications for Woodbury are.

And oh, the people who share their deep emotional turmoil! Seriously – and in season 1 these would have been awesome character building moments full of conflict and depth – and they still were. Kind of. But I kept snapping back to the fact these adults were unloading their deep trauma and issues onto a 10 year old child. So my mental conversation always went:

Rebecca: let me share all of my worries about my pregnancy and 2 possible fathers
Clementine: lady, really? I’m 10 years old and you want my input on infidelity, raising a child in a dystopian world and all your guilts and fears? Really?

Nick: let me tell you about all my guilt and constant fear that I’m a total screw up
Clementine: look mister, I barely know you and if you’re looking for reassurance from a 10 year old, then you are a screw up. Also, I’ve had to rescue you, that’s kind of the definition of screw up.

Kenny: *COMPLETE EPIC MELTDOWN*
Clementine: you are kidding me. Was there a meeting or something that elected me camp councillor?! This man has lost all of his family and is now attacking anyone who looks at him sideways, but a 10 year old is responsible for his emotional maintenance?

I just… don’t get how these people could even not feel awful dumping on a child like this. And, really, when I/Clementine respond with advice and comfort and reassurance which they take I wonder at the reaction – aren’t any of them… embarrassed that they’ve just needed a child to emotionally pet them, pick them up and get them moving again? Aren’t any of them annoyed that a child has, in some cases, patronised them silly? Worse, repeated members of the group not only turn to Clementine for their own emotional support – but demand she handle the issues of other members; worried about Kenny? Send in Clementine. Jane a bit stand-offish? Send in Clementine.

Together this kind of made it hard to connect with any of the characters, because nearly all of them left me frustrated and/or thinking Clementine should leave them.

In terms of inclusion, this game is vastly ahead of 99% of other computer games out there. Which is kind of like comparing a mouse to a load of ants and saying how big the mouse is.

We do have a lot of racial inclusion – starting with Clementine herself who is Black. Numerous people who join the group in relatively major fashions are POC – Christa, Rebecca, Sarita, Carlos, Sarah, Mike and several other characters who are around for a few scenes – including Reggie, Alvin, Omid and many others as well as many other characters who are there in the background or for one scene.

Are all of them perfect? No, I think towards the end of the game we have a pretty white group and Mike could have been a little more involved. I do think it would have been nice for some of the POC to be the more active personalities in the group as well – rather than Kenny, Luke and Jane Rebecca’s interactions with Clementine were also shaky but I think that’s more down to the way this game wasn’t entirely sure on how characters should interact with Clementine to keep her involved. Baring a few problems this game had a lot of POC and they were good roles. Did many of them die? Well, yes, but it’s The Walking Dead – it’s not character death per se that can be the problem – it’s how involved and developed these characters are before they die and in what proportions they die.

Which brings me to the gay couple. Now, yes, there was one so I have to praise the game for being better than 99% of the games out there – but being the only glass of water in a desert doesn’t mean I have to drink stagnant cholera and call it yummy. Firstly, we never see these two together. In fact, we see one, he lives for, oh, 20 seconds then dies – we learn he is gay after death. His partner drops the word “partner” once, after which the word “friend” is pulled out and made to work overtime (and you can have an enraging time in the forums discovering a lot of players DIDN’T REALISE they were gay).  The surviving gay man gets to give Clementine a big uplifting talk about hope, to forgive his partner’s murderer (seriously, I kid you not) before he gets killed off too. There’s no attempt to develop either of them, they don’t last long enough for it. They’re also deaths I can do nothing about – and the in the whole lodge scene they are the ONLY group members to die. That whole episode only has 3 group deaths – and the straight man who died is a “determinate” one (i.e. you can choose who to save).

These are the only gay characters in both games and they died very quickly with no development – they were throwaway tokens.

Then there’s Sarah, who is either developmentally disabled or has a mental illness. She’s the burden of the group – literally, this is how she’s treated from the moment she’s introduced and Clementine in particular is turned into a caretaker for her. All Sarah does is be a problem, a worry and someone we need to protect and help even while she constantly endangers us. In fact, when completing one of the episodes we even get an “achievement” “A Heavy Burden”. Wow, you’re not even subtle here game! And, again, yes people die but this game wanted me to leave Sarah behind so badly. The number of times she was in peril and I had the option to leave her or save her, it came across like the game was saying “no, really, you sure you don’t want to abandon her?” “Look, last chance, abandon her already!” along with numerous side characters clearly in favour of leaving her to be snacked on by any passing walker. She constantly caused worry, difficulty and risk and I had the horrible impression the game was written to try and make me hate her.

This is ALL Sarah is, she is never developed into anything more and at no point does she ever have a positive effect on the group. She is the Burden we have to drag around, not a person. She’s never developed into more, never allowed to be more and in the end we have this ableist presentation of a non-person everyone would be better off without (this really isn’t even subtle. If Jane had turned to Sarah and asked her to “look at the flowers” it wouldn’t have surprised me). Was this supposed to be a “moral conundrum” thing? If so it still used this disabled person as nothing more than a tool to teach an object lesson.

So… in the end this is a good game with many of the elements that made the first game so powerful. I think it handled the protagonist switch from some degree of skill and brought new elements out because of it. But the characterisation was generally weaker, the side characters were pretty completely eclipsed by Clementine’s awesomeness which, coupled with some shaky interactions with the child, made them seem very ineffectual and kind of frustrating and didn’t leave me all that sad when they died. I appreciate that the game has tried to build on and expand on top of the already excellent racial diversity of the first game, but the disabled and gay characters in this game fell far short of being praiseworthy.