The Last Man on Earth, Season One, Episode Seven 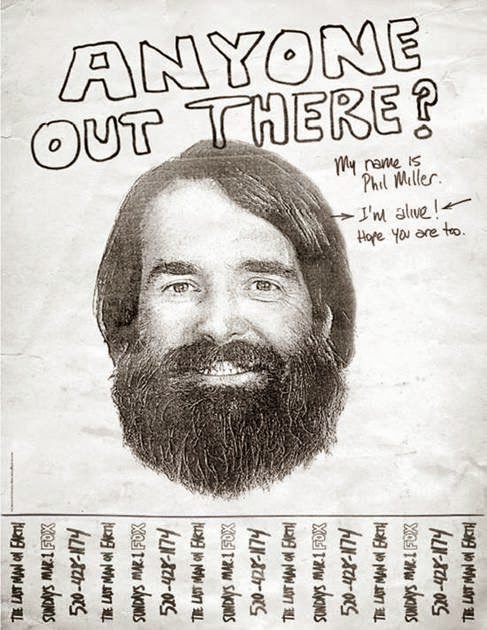 This episode opens with Phil dreaming that Melissa's answer to last week's confession of love was yes. They end up making love to Fine Young Cannibals, She Drives Me Crazy.  Yes, it's obviously a dream sequence.

Finally awake, Phil is busy using his toilet pool when he is approached by Carol and informed that his so-called "private" time is poisoning the neighbourhood.   Carol has drier sheets stuffed up her nose to deal with the stink but Phil insists she leaves and calls her concerns bullying.  Phil then blames his crankiness on the music coming from Melissa's house last night.  Carol suggests that Melissa and Todd were probably having sex which Todd is not pleased to hear.

Phil goes to visit Todd, who is sitting outside having a coffee. Phil then brings up at the music at Melissa's and Todd stumbles to explain what he and Melissa may have been doing.  After a little prodding and ridiculous giggling, Todd, with a huge smile on his face admits that he had sex with Melissa.  Todd then goes on to say how it was like a dream.  Todd even says that Fine Young Cannibals, She Drives Me Crazy became his sex song with Melissa.   Melissa breaks up the moment by asking Todd to come over to her place because she needs help with a thing.  Phil offers to help but is told that this is a project Todd has already started on. When Melissa walks off, Todd of course has to clarify that Melissa is talking about sex, enthusing that he is so excited that this is his life now.

A dejected Phil returns to house and hears the strains of She Drives Me Crazy.  Phil then dives head first into his alcohol kiddie pool and screams.  As you do.

The next morning, Phil and Carol are having breakfast and she brings up his toilet pool.  Phil, lost in his obsession with Todd and Melissa still has not cleaned the pool.  Carol then brings up Melissa and Todd having sex and right on cue, She Drives Me Crazy starts to play again.  Phil then claims that Melissa and Todd are being inconsiderate because they are aware that every time the music plays, it makes everyone in the community aware they are having sex. Carol suggest that Phil do something about this because for some strange reason, Phil is now president of the United States.

Later that night, Phil suggests that now that there are four of them they should have a weekly town hall meeting.  Phil introduces the idea of a grievance board but Todd and Melissa are not paying attention and are instead tickling each other.  Phil claims to be happy for Todd and Melissa and proposes a sex curfew and a noise ordinance.  Melissa rightfully tells Phil that what she does with Todd is none of his business, causing Phil to declare himself the President. Melissa calls it bullshit and Todd calls for a vote on his restrictions and finds no support.  Melissa instead enters a motion that when visiting neighbours one should wear a shirt.  Carol then enters a motion for Phil cleaning out his toilet pool and it is unanimously voted in.

In the next scene, Phil finally begins to clean out his disgusting toilet pool. Of course it's a disaster and in  frustration, after kicking various chemicals inside it, Phil actually falls in.  Yeah I know I am supposed to be laughing at this but the whole thing is just disgusting.  Melissa finds him crying by the side of his pool. Melissa asks if they can talk and Phil asks for a moment to change.  Later, Melissa apologises for playing the music, given the talk they had about Phil's feelings for her.  Phil tries to blow it off and Melissa tells him to drop the act and be a real person. This however is something I think Phil is incapable of.  Phil brings up the fact that he almost had sex with Melissa and questions what would have happened if Todd had not seen the fireworks.  Melissa points out that this is pointless because Todd is here now.

The next day, Phil knocks on Todd's door after a night of stewing.  On the drive, Todd talks about how Melissa is an animal in the sack and that they go at it for hours and hours.  Clearly each word Todd says is torture for Phil.  Phil has apparently told Todd that he is taking him to the place where he goes to do all his thinking.  Phil then pretends that something is wrong with the car and asks Todd to get out and take a look.  Moments after Todd is out of the truck and declares that there is nothing wrong with the truck, Phil takes off driving. Phil only makes it a few meters down the road before stopping, screaming and returning to Todd.   Todd however thinks that this was all a practical joke and asks Phil how much longer until they arrive at the location.  Phil announces that they have arrived and suggests they should head back home.  Todd however wants a moment to savor the scenery, which actually is quite beautiful.  On the way back, Phil apologises to Todd, who has no clue why Phil is apologising. Todd calls Phil a "really nice guy" making me wonder has he actually met Phil. Are the writers ever going to get around to giving Todd more common sense than a turnip?

Upon return, a determined Phil heads back to his toilet pool.  Later, Carol shows up at Phil's and he has to struggle with her to get her to take out the drier sheets from her nose.  Phil declares himself a nice person, adding that he has a new plan for his bathroom needs.  Phil leads Carol into the bathroom where he has installed a porta-potty.

For the record, each moment of this show I watch, I am thinking terrible things about Sparky and this torture he has inflicted upon me.  Really Sparky? I mean really?

Of course, we are meant to see the pairing of Todd and Melissa as ridiculous because she is young and blonde and Todd is fat.  Heavens knows no one finds fat people attractive right. It's worth mentioning that it's also in Todd's favor that he doesn't believe that shitting in a pool and polluting the very air he breaths is a good thing.

Melissa still isn't a person to either of these men actually.  Todd is quick to celebrate having sex with her, even as Phil is moaning that he isn't having sex with her.  Are Todd and Phil at anytime going to acknowledge that Melissa is more than a walking vagina?

Also, who picks She Drives Me Crazy as a sex song?  These are grown adults right?

Then we had Phil's toilet pool.  I am actually surprised that they're not all diseased.  I have to say that I was firmly team Carol in terms of having that cesspool cleaned up.  I suppose we are meant to see the cleaning of the pool as progress for Phil but yeah, something that basic shouldn't count as progress.

Again, why am I watching this show? Oh yeah, I remember, Sparky loves to cause me pain.