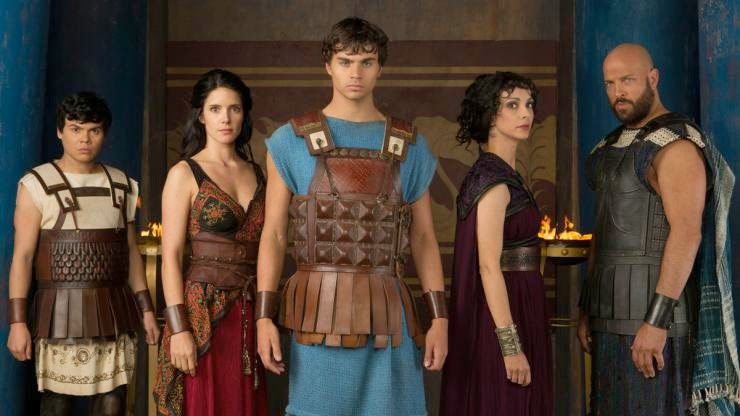 Opening of the pilot with a guy who looks a bit roughed up in a dark placewith his legs in stocks. Kinky. He’s also surrounded by severed feet – now that cave must smell awful.

An ominous, huge, growly figure sharpens a blade while the captured man who would rather keep his legs yells his safeword tells the cyclops he’s there to help. He’s apparently been sent by the Cyclops’s mother Gaia to find her oracle. The roaring cyclops does have 1 eye – in its mouth. Well that’s different and rather impractical. The Cyclops isn’t interested in oracles and paints the man’s feet blue, as you do. Establishing the shows cheese credentials, the man manages to steal the Cyclops’s blade, use it as a boomerang to cut off the monsters fingers and break out of the stocks.

Having escaped the man follows the sound of female screaming and finds 3 women who, when they hear his mission, each claim to be the Oracle of Gaia. What, is rescuing rationed or something? Can he only rescue one damsel in distress or be over his hero quota? The women are also of classic Maiden, Mother and Crone age, so I rather suspect all three are the Oracle.

Sensibly, the man opts for a 3-for-1 rescue special, and has them hide while he lures a Cyclops off the edge of a chasm, securing himself with a rope (and a gravity defying leather skirt)

When they get to the surface, the young woman declares she’s not actually the Oracle of Gaia – as do the other two. He decides that the younger one is because she runs. Quite why the genuine Oracle would run I don’t know. So he now becomes kidnapper, dragging the woman away from her family. At least he seems to be right and it is the Oracle and she points out that the priest will kill him – after all, oracles are supposed to be all blissfully divine, they’re not supposed to run away. They’ll want to keep that secret.

She tries to bribe him then says she ran away because she was beaten, abused and raped – which he then disbelieves because the priests told him Oracles have to be virgins. She hits back at him believing the priests she said raped her. He also tries to play that he’s too hard to care so she throws in a vision: he’s a good man and his name is cursed. His name? Time to get ye to a courthouse and change it! Apparently people who say his name out loud get turned to stone; the Oracle has some hilarious curiosity (“if you said it, would you turn to stone?” He, wisely, has decided not to try).

Having proved that she’s the Oracle she demands to be released – he points out that proving she’s the Oracle doesn’t actually get her out of being kidnapped for being the Oracle… This Oracle’s logic is a little shaky.

They’re attacked by random cannibals in make up and the Nameless man fights them with a rope. A rope? This man went Oracle hunting against the Cyclops without an actual weapon? He manages to strangle one (and it’s a pretty good depiction of the whole nastiness of strangling). The other cannibal runs off with the Oracle. D- grade there Nameless. He follows their tracks but they disappear abruptly.

Twist! The guy who took the Oracle is actually known to her and has just rescued her from the Hero. She talks about a vision but doesn’t want to risk him, it’s apparent they know each other and care about each other. She leaves on her own – and has another vision. And she’s found and kidnapped by the Hero again (honestly the credits call this guy Hero but he’s not exactly heroic).

On the way she questions his uber skill with a rope. She does a Sherlockian insightful analysis of him growing up alone (something Oracles are good at). She also reveals that the “wild man” is her brother, Theo. And he catches up with them while they’re bickering and hits the Hero with a poison dart. The Oracle, despite the hole kidnapping thing, decides to save the Hero. After a bit of staggering about, the Hero wakes up to find himself hogtied because the Oracle isn’t a complete fool. But she doesn’t make a great job of it so he gets free, but they seem to be long gone. He gets to tracking again and, again, the Oracle and her brother are really really good at hiding their trail.

Despite that he still manages to find them while they argue, loudly, about whether Theo will accompany the Oracle to Athens. How does he keep doing that?! So now Theo and the Oracle are kidnapped.

They get to the temple where she’s tied – and apparently all this was so the Hero could consult the Oracle. What? She offered you visions to let her go! She rightfully calls him out for this, but apparently the priests told him she could only answer his questions in the temple. They argue a lot and she says how disappointed she is in him (which actually seems to be a pretty effective put down). He asks why he was brought up in hiding and she uses the temple hole (the Mouth of Gaia) to enhance her visions – and she sees that his father is King Aegeus. The king of Athens. And as the first born son, he has the sacred lexicon inside him

The priest is happy to exposition what the Lexicon is – it leads to the doors of Olympus which in turn makes you into a god. The priest begs to help him discover the key to the Lexicon, but the Hero decides to leave – taking the Oracle with him. The priest summons his guards when Hero refuses his hospitality. We have another fight scene and the Hero is forced to surrender to save Theo. Once he has surrendered, the priest has Theo killed anyway.

Moving on to the siege of Athens, 2015 BC, and King Aegeus meeting his war council including General Dion. King Minos has besieged them and outnumbers them 10:1 while Aegeus’s plan is “we’re 10 times as good as them”. It lacks nuance. Aegeus demands a victory plan (and scorns wooden horses). His other plan involves Medea using magic and interpreting a “lexicon”

That Lexicon would be inside their son, Lykos, who she is bleeding and having recite his visions. She gets testy when he dares to feel woozy. I suppose I didn’t expect Medea to be cast as a loving mother figure.

Time for some awesome and pretty bloody fighting on the city walls complete with dramatic, blood stained slow motion and the king gets hit by an arrow.

He’s taken to Medea for treatment and we have a few other characters introduced, Aegeus’s brother Pallas, prince Xerxes (who drops in for reasons) and Alexa (who seems to be a servant) who takes over Aegeus’s care. Being the king’s brother, Pallas naturally begins plotting against his sickly brother. Given Aegus’s ruling so far, this seems like a good idea. Pallas begins his plotting by manipulating Dion.

Dion whimpers to Medea who tells him, basically, not to be so soggy and easily manipulated. It looks like they’re having an affair or at least he looks at her as a mother figure (since she’s Medea that may be unwise) he continues soggying around while she plots.

The king gets out of his sick bed and Medea has to stop him trying to run a war council while unable to stand and we see yet another new character – Captain Horos, Dion’s new protégé/bodyguard. He’s good at sinister looks.

Medea does some investigation into the arrow that shot the king and realises it is not Minoan, merely meant to look Minoan. He’s shocked at her suggestion that the ominous and clearly plotting Lord Pallas is actually plotting. Medea follows the cunning plotting of Pallas eventually settling on Horos: Pallas needed to get an assassin close to the king, to do that he terrifies Dion with talk of a plot and Dion, a coward, then takes on Horos as a bodyguard and gets him close to the king. Damn Medea’s good. Horos tries to attack her and she kills him with cunning use of mirrors.

Did I mention she’s damn good?

She goes back to keeping her husband in his sick bed. She then goes to the war council and proposes a toast to the king, Pallas is wisely wary of drinking from a cup she gives him. But it’s not him she poisons – but Dion, dramatically accusing him before the council. She then appoints Lykos, Aegeus’s son, to be the leader of their armies.

Effectively, Medea is in charge and the generals know it. Even a bitter Pallas. Medea continues, in frustration, to get the Lexicon out of Lykos –but unknown to her he isn’t the first born son

Well that was pretty gloriously cheesey. But I’m happy with that –I like some good melodramatic cheese at times. It’s one of those shows I enjoyed and felt vaguely guilty about enjoying it because it is so cheesey and a little silly

I am surprised by how gory it is. There’s no pulled punches, no sanitisation, from strangling to blood sword fights to throats being cut, people die in blood, gory detail sometimes with slow motion to draw full attention to the wounds. Part of me thinks it’s gratuitous, but another part of me thinks if you’re going to depict violence and death then it should be depicted honestly and not sugar coated. I think gory violence is preferably to sanitised violence.

Medea is a classic villainous manipulative woman we have seen so many times before – yet at the same time she is gloriously cunning, capable and quite willing to stab a man in the neck and poor scorn on everyone else. I kind of want her to win even if she is evil because she is so glorious.

The Oracle claimed she was abused – I dislike a lot how casually that was thrown in. If there was to be no follow up on her abuse, in fact a complete dismissal of it, then her simply claiming to be a prisoner would have been sufficient motive to run away without having to invoke rape.


I like the cheese. I like the Greek mythology, I always have, and Medea is somewhat awesome.The rest....? I don't know, nothing's sold to me yet. Cheese alone will not carry it, nor will odd amounts of gore. The plot is basic, the characters nothing special, the acting fairly blah - I need  more. It doesn't help that the whole thing screams low budget