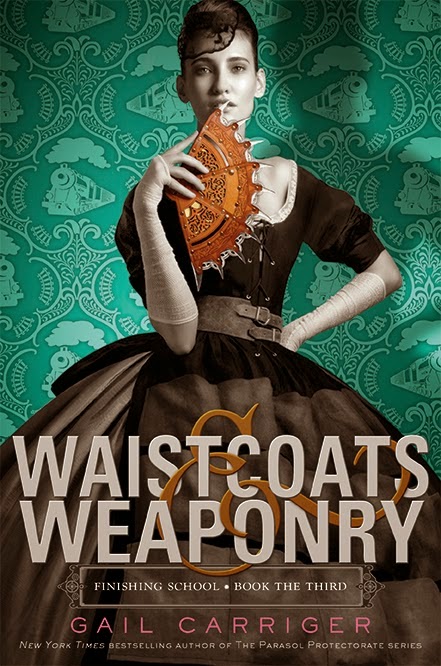 Sidhaeg, one of Sophronia’s best friends, is shaken to the core by devastating news of her werewolf pack back in Scotland. She is convinced that she has to go home to help – which means a crafty absence from the school and a train journey across country

Of course, Sophronia is willing to help her friend, despite doubting the wisdom of her decision. Picking up many friends ad companions they make the journey to Scotland

But along the way they stumble across the latest scheme between the supernatural-hating Picklemen and the vampires and they cannot help getting involved. But a brief distraction quickly becomes deadly – and with possibly devastating consequences for the whole country.

This excellent world setting and fun concept is backed up by Gail Carriger’s writing which has always been that excellent balance between proper Victorian language and screaming hilarity. It’s fun, it manages to be both a parody and serious and it always manages to be extremely funny, well paced and a general joy to read.

Since this is the prequel series to the Parasol Protectorate it’s also interesting to see the beginnings of some of the characters and events from that series – including the beginning of Lord Maccon’s story and the drama that overtook the Kingair Pack and how Sidhaeg became the woman she did. It’s nice to see it from this end

And it also introduces another excellent theme of this book – growing up. An inevitable part of any school story, Sophronia and her friends are coming of age and things and people are changing quickly. People are leaving Sophronia’s live, people are finding their paths and people are having to grow up – which adds to some sadness for Sophronia but also concerns about where she goes next; who does she seek out as a partron or a husband

Which also links (and I’m going to have an aside here to praise how well all the elements of this book link together and feed off each other) to Sophonia’s opinion of the politics of the day. She doesn’t favour any faction, she rather thinks any faction gaining complete control would be a bad thing and disapproves of the whole “with us or against us” mentality of both the vampires and the picklemen. She is a big believer in balance but that, in turn, makes her unwilling to seek a supporter on any side, even with Lord Akeldama courting her

In this book we have a lot more development of Soap and the trouble he faces as a working class Black man in Victorian England. From a large number of people assuming that he’s not English (he is) to a lot of overt othering of him as a Black man. He’s not their kind, not one of them and even with people who aren’t overtly hostile towards him there’s a lot of condescension and looking down on him. People don’t even argue with him, they’re appalled that he presumes to have an opinion and argue with them in the first place.

One surprising element of this is it even applies to Sophronia herself – and that’s unusual. A lot of authors like to make their protagonists magically immune to the prejudices of the day, they like to have protagonists who have managed to duck away from the prejudice that saturates society. And sometimes that works – it’s a myth that everyone in a historical setting would share the same prejudices and that no-one actually tried to fight against them. But it is interesting to see Sophronia acknowledge her own prejudices and how that has affected her relationship with Soap, how that has prevented her ever getting as close as she might because of his race and class. There’s also a wonderful moment where she realises, as part of the ongoing arc of everyone growing up, that she expected Soap to always remain how he is and never have any kind of ambition or growth or change – just be the person she wanted to be. This has an additional excellent class analysis when she warns him against the risky life he plans to leave and he rightly points out that, as a Sooty (someone who works in the boilers and engine rooms of an airship), he was never going to lead a long, healthy life anyway.

This rather grim depiction is excellently offset by Soap being brave, intelligent and capable thoughout the book and by him challenging all the characters, including Sophronia, when they see him as less. It also ends with both an excellent future for Soap, but also Sophronia making a major decisions and possible sacrifice on his behalf.

There’s some ongoing wonderful look at women of the time as well – at least middle and upper class women; as I mentioned above it’s wonderful how the intelligenciers of Madame Geraldine’s school use the rigid trappings of gender roles as weapons. One element which is relatively unique is the pressure to marry that the women are under – not just that they must marry, but that they must marry well. Love, affection or even liking of the man in question takes a back seat to social position and wealth. This is especially relevant to Sophronia whose family occupies one of the lower rungs of the nobility and, as Monique puts it, she cannot possibly marry down.

There are no LGBT characters in this book, but there is an ongoing acknowledgement of the possibility of people being gay. Except this is usually accompanied by ridiculous stereotypes and, at times, rather homophobic “humour” that makes me wish that it wasn’t there at all.

This book is another excellent addition to this series that is so fascinating, exciting and utterly hilarious with some excellent, wonderful characters, some nicely handled social issues and a plot that keeps drawing me in. This book didn’t end in a conclusion per se, so much as it ended a chapter in Sophornia’s life and introduced a whole, major character arc that has been lurking in the background in the previous two. Now I think the real drama is about to begin after some brilliant introduction – I would say that we’re heading up, but we’re already very high to begin with