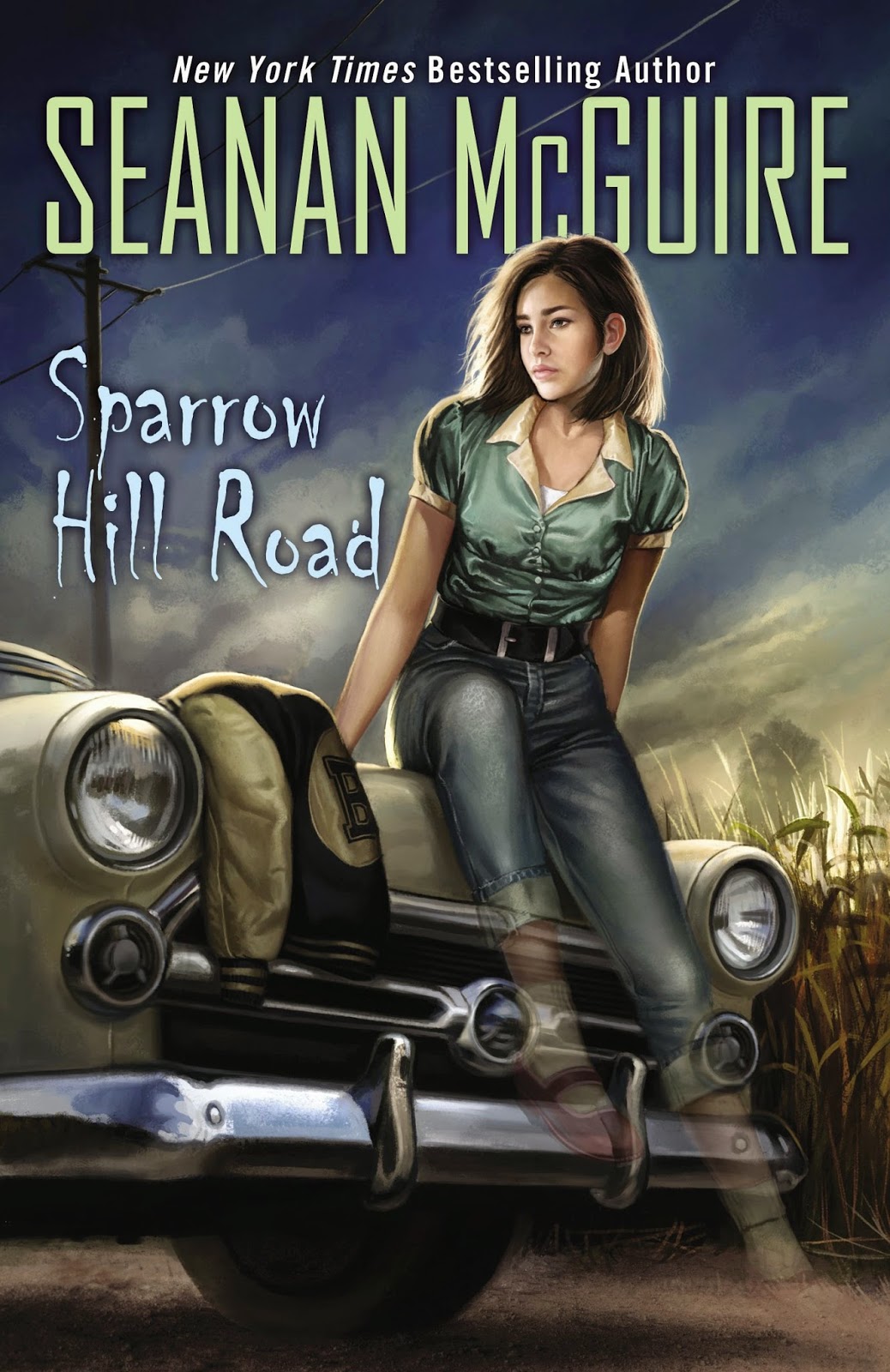 Rose has been a ghost since 1952 when, as a 16 year old prom date, she was driven off the road by Bobby Cross one of the darkest and most sinister figures on the Shadowroads

She’s now a hitch hiker ghost, walking the highways – both real and shadowed – of America stealing chunks of life while she can, saving the few people she’s able to and ushering those she can’t into the next life.

But Bobby Cross hasn’t stopped hunting her – or others – over those last 60 years. One day she will find a way to be free as she learns more and more of the underworld, until then she keeps running

This world is amazing. This world is not just extremely imaginative, but there’s a truly vast amount of research behind it which is utterly amazing. All the ghosts stories, all the urban legends are pulled together and present depending on how people died. From ghostly-hitch-hikers, phantom drivers and crossroad demons – all the legends of death and the road.

The road theme is also excellent – it’s such an unexplored niche but at the same time so common in urban legends. Ghostly riders, ghostly hitch-hikers, ghosts who just want to go home, ghosts that convince you to pick them up and take them home… there’s a lot of ghost stories and urban legends about the open road

This all comes together with a lot of extra fascinating world building (route-witches, whole magic systems about roadways, living personifications of highways!) shadow roads and a whole load of magic and woo-woo all with an excellent road theme. It’s all very dark and very creepy and wonderful to take this all from the actual ghosts’ point of view

Which brings us to our protagonist: the Phantom Prom Date, Rose who died on the road at the age of 16. She walks the shadow roads, slipping between the levels of the ghost world and the real world. She haunts the highways looking for people to give her a ride and, through the rules of her kind of spirit (each ghost has its own set of rules which I kind of love). Her story has grown beyond all imagining in the 60 years she has been dead, some presenting her as a serial killer or horror of the road, some a companion and some even the truth – she tries to save those she can (sometimes very few) and ease the passing of those she can’t. Especially if they’re due to become a particularly terrifying ghost

Rose’s travels allow us to see so much of the world and the setting and she brings us a great lens through which to view her unlife: including why she and her fellow ghosts hunger for the chances of life they can get. Her experiences and insight are excellent. She’s an awesome character, in an awesome world with some really amazing maintaining of the theme. The spookiness, the sense of surreal – it’s really well done

Rose herself is a wonderful balance of despair, jadedness, ennui and practicality. She isn’t angsty – but she’s not in a good situation and she knows it; she finds what joy she has but knows it’s not going to last. That doesn’t mean she monologues her sadness all the time but the way she values and savours the moments she has in a way that makes it clear just how precious, rare and important they are. It’s really well done and carries a lot of the sense of the book without the need to be overt. I really like how it’s all conveyed

We do have some POC – the head of the Road Witches is an Asian woman and both powerful and wise. There are some other POC in the background, I won’t say they take up major roles but I think, beyond Rose herself, there aren’t that many major roles in the book. Maybe her best friend. Many of the characters, along with Rose, are female including Rose’s best friend and kind of mentor – it’s fairly female heavy and there’s a nice poke at the way she is treated as she wanders the roads – apparently a 16 year old hitchhiker, including the sexual hypocrisy she often fsaces. There are no LGBT people.

There are some excellent class reflections from Rose when she was a child, growing up poor and what that meant for her – and how that shaped her experiences and view of the world.

So, great characters and an amazing world… what’s not to love?

And yet… I’m left a little… lost by the whole thing. The style of the book, the shape of the book feels odd to me. In format, it’s almost like a series of short stories – several mini-stories and mini plot lines. Each has a beginning and an end, each takes a different period in Rose’s life, often interposed with different events to give an actual sense of reminiscence. At the same time, none of these stories could really stand alone. They need the ongoing theme, the ongoing connections, the ongoing world building to actually make them work as stories. If the appeared individually in, for example, an anthology, I don’t think it would work, I don’t think there’d be enough there to carry the whole sense of the book. Yet… as one large novel I find it too disconnected without a central focus. I think it’s a very character driven book – it’s focused on the afterlife of Rose, the Phantom Prom Date, source of a hundred ghost stories, but it doesn’t have a real PLOT behind her experiences. There’s Bobby Cross, the big bad, but he’s a background, unknown or completely absent figure for too much of the book. It’s a series of events in Rose’s life presented one after the other – and while that’s not bad it doesn’t suit me. It’s too unfocused, too waffly, and the pacing is too slow. The middle of the book just becomes so... gooey with me kind of forgetting what the book was supposed to be doing and now looking for a point or an ending or something.

I was interested, I was fascinated, I was curious and… I was kind of bored. I loved the characters, the world, the amazing imagination behind this whole concept. But I didn’t have the same interest in the actual plot itself.