Last Man on Earth Season One, Episode Nine: Pranks for Nothing 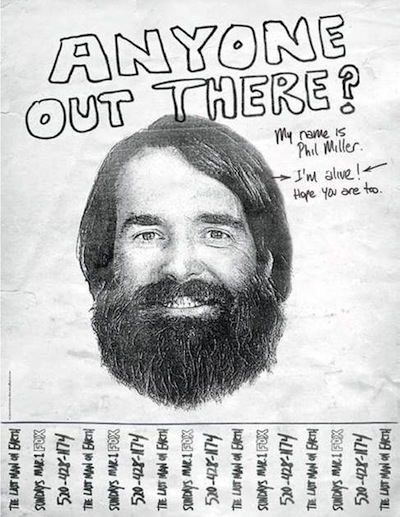 Phil tries to explain to the group that he all of his lies were simply a practical joke but no one is buying it. Erica and Gail are quick to point out that he said that Carol was dead, so Phil lies again and claims that he was married to another woman named Carol before the virus.  Melissa calls Phil disgusting but he still tries to sell the prank that he was supposedly planning to pull, claiming that they all ruined his practical joke.  Phil tries to lay it on thick, claiming that Todd, Melissa, and Carol, mean the most to him in the world.  At this point, even Todd cannot defend him.  Melissa tells Erica and Gail that they can follow them to the cul de sac.  Everyone gets into their respective cars, leaving Phil alone in the middle of the road.

It's now morning and Phil is slowly walking back to the community. Phil walks with a dejected look on his face.  Back at the cul de sac, Gail and Erica are getting to know Todd and Melissa, when Phil arrives.  The conversation stops when he enters and everyone refuses to make eye contact with him or acknowledge his existence.  Phil then asks how long he is going to be in the dog house, again claiming that he was pulling a prank.  Phil decides that he is going to return the silent treatment.  When that gets no response, Phil again declares that it was all prank before backing out of the room.

Phil returns to the home he shares with Carol and she pretends to be a ghost because he told Erica and Gail that she was dead.  Phil asks for a chance to explain but Carol believes that everything is cut and dry. Carol then slut shames Gail and Erica for some reason and calls Phil a donkey and a sewer rat. Carol then orders Phil to leave.

Phil finds himself alone at the bar with the balls.  He tells his imaginary friends that he could use a break from people and that this is a nice change of pace. Phil lies on the pool table calling beds over rated.

Gail and Erica go to see Carol with a pecan pie, hoping that there is no hard feelings. Carol then says that there are no hard feelings because all Gail and Erica did "was make a quick slut based decision," about sharing their bodies, with a man they hardly knew.  Gail tells Carol that they never would have done that stuff if they had known that Phil was married and Carol responds that she doesn't hold it against Gail, but in the U.S., "people tend to do a bit of research before inviting a man into the world down under." Erica asks that they move past all of this and puts on the pie on the table.  Carol however does not want the "hussy pie." Who says hussy today? Really?

Phil is still at the bar and is in the process of getting drunk, breaking bottles on the floor.

Todd is still drunk at the bar and is despondent over the fact that no one has come to find him. Todd finally admits to himself that he was wrong and really blew it.  Todd accepts that he is  persona non gratis because no one wants anything to do with him.

Phil knocks on Carol's door and pretends that he is Mike Miller and looking for his twin brother Phil.  Carol simply closes the door in Phil's face.

Melissa, Todd, Erica and Gail are playing croquet  discussing Phil's latest antics.  Melissa calls Phil a pathological liar.  What they don't know is that Phil is spying on them and using a listening device to hear every word they are saying.  As they run Phil down, he again walks away dejected and heads back to the bar.  He questions why everyone is so mad and thinks that he is just some liar.  Phil even thinks back to what he could possibly have done to make the group believe that he is a liar.  We then get a flash to all of the times that Phil has lied so far.  Phil has a moment of enlightenment and realises that he is a liar.

Phil heads back to the group and asks for a moment of their time but is soundly rejected.  When they try to ignore him and go on with their evening, Phil starts to scream, declaring that he will keep doing this until they agree to talk to him.  It's Melissa who informs Phil that he needs to get it through his head that they don't want to talk to him. Carol however suggests that they should just let Phil talk to get it over with.  Phil admits that he wasn't trying to pull a prank when he tried to go skinny dipping with Gail and Erica.  Phil then admits that he didn't want to have sex with Melissa solely for the purposes of repopulation and instead wanted to have sex with her because she's "a friggin smoke show." Yep, Melissa is back to sex object. To Todd, he admits that he didn't co-write Fields of Gold by Sting.  Phil then admits to Carol that he has been dishonest with her many times and that they should never have gotten married. Phil admits that when he said, "I do," it was lie.  Phil does however apologise for hurting Carol.  Phil finishes, saying that he doesn't expect his admissions to change anyone's mind but that he'd rather not live another day as a liar.  Phil turns and walks away. Carol gets up and leaves the gathering as well.

Back at the bar, Phil tells the balls that he did the right thing.  Carol shows up and announces that she has a few things to say as well.  Carol pulls out the quilt that she has been working on and tells Phil that it's ugly.  Carol explains that sometimes in quilting, you just don't have the right scraps and that you work on hard on it, tricking yourself into thinking it's beautiful.  Carol then hands Phil a folder containing divorce papers, saying that they are better off without each other.  Carol tells Phil that she just wants him to be happy.  Phil signs the paper and Carol declares them officially divorced.  The two shake hands and then hug.  Carol and Phil exchange a few kisses before Carol leaves, telling Phil that she will see him back at the cul de sac.

Okay, this was supposed to be Phil's growth episode.  He finally came clean about all of the atrocious things he has done.  It is meant to give him a chance to start a clean slate but given what we have seen of him thus far, I think that this is as good as it's going to get.

The slut shaming in this episode pissed me off.  Why is it Gail and Erica's problem that Phil lied to them?  Why does this make them man stealing sluts?  In ordinary circumstances, this would be problematic and it is even more so given that Erica and Gail are the only two who have had same sex experiences on the show to date.  Thanks for that Last Man Standing.

Melissa is still playing her role as the shrew of the show.  She is absolutely unwilling to forgive Phil and encourages others to do the same.  I cannot say that I blame her but I am tired of her character alternating between hateful shrew and sex object.  Can we just have one female character with a real personality please?  Would that be so bad?