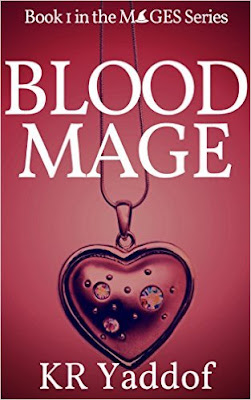 The world is in turmoil. A mysterious attacker has destroyed the world’s capitals and several other major cities as well, leaving civilisation weakened and very worried.

Alexis wishes she could live the life she had before – but she is the daughter of the new President of the devastated United States. The constant security is enough to make any kind of normal life hard – but when her necklace starts glowing and she starts manifesting strange abilities she finds she has a whole secret family legacy to contend with as well – and secrets that may hold the answer to who launched the attacks

This book starts with a world and concepts that has some potential:

We have a world where most of the major cities have been dramatically destroyed by a completely unknown foe. Millions are dead and the world is in turmoil and very afraid. We have a protagonist who is the US president’s daughter and somewhat in the centre of a lot of the politics that could arise from this. And she has some magical powers that are developing which is pretty much par the course but could go to interesting places.

Alas, this book did not deliver on that potential.

Firstly, in response to the horror of so many millions dying, our first insight from Alexis is the unhappiness that, because she’s been moved to a highly secure school with the other kids of important politicians, she is no longer going to be the most popular girl in school.

As an opening introduction... this is pretty horrible. In the face of the world being devastated, no doubt these characters grieving for millions dead and now facing a very tense and worrisome future full of fear and tension Alexis is worried about not being the popular girl and her new high school

This doesn’t really change for most of the book – not just Alexis but most of the cast seem to be focused largely on pretty mundane high school issues with little to code either the dangerous world they live in, the privileged place they occupy (there are secret service agents around but they’re set dressing). This high school and the characters in it could be in any setting and these characters would not need to change. What worries them – parental rules, parties, whether other characters are cute, relationships is all pretty much interchangeable with any other setting.

That’s not to say that a high school story has no value, but for it to be so divorced from its setting is clumsy and lacking in originality and creativity. It’s also pretty clumsily done – we have the designate Mean Girl literally threatens the protagonist (the president’s daughter!) with a knife. Their school lessons consist of apparently political debates which they never actually do (most obviously is them presenting a debate over abortion and euthanasia as very edgy but never ever ever expressing an actual opinion, position or debate on either – we’re supposed to see these characters as thoughtful, and considering social issues without doing anything as risky as actually considering those issues).

This pretty much sums up the whole extent that being the children of important political figures and the whole shattered world – occasionally a character will mention a potential for war or protest and they will briefly discuss it – shallowly – and then quickly move on. Certainly any rebellion or questioning of the parental figures is quickly squished under the idea of being good children or how they are simply not capable of having an opinion. The characters seem equally (or even more) concerned by the fact they can’t gather and have parties than any of the other things happening in the world.

Much the same applies to thee magic. Beyond her jewellery glowing now and then, there is very little actual development of magic, what mages are or what they mean. Beyond opening some windows, we get to about 150 pages in (of a 200 page book) before magic or mages actually are developed in any real manner. We get constant teases, books people don’t read, characters who know the truth but, for whatever reason, chose not to expound on the point. It drags on with endless hints but no development or revelation

This happens for most of the book. The actual unique elements – magic and world setting – don’t raise until the last quarter – or much later – of the book. Before that we have 150 pages of unoriginal and not well executed high school drama, aborted and confused political poking and a wide cast of characters who are little more than names and certainly none of them manage to hold my interest. These names have their mean girl dramas, a boy who likes Alexis but refuses to take hints to back off, a best friend who has a romance drama and is all dramatic about it – all of these extremely privileged rich kids playing out this drama while the actual state of the world is rather ignored.

By the time the plot elements actually developed I was too bored and indifferent towards these characters to truly care, and too aware that there was so little left of the book to be invested. We end on a cliffhanger, of sorts, but with no interest from me in actually seeing what happens next, not enough of the world displayed or explained for me to truly care and none of the characters sufficiently compelling to make me want to continue their story.

Diversitywise, the Mean Girl and her family are Latino – they’re not all evil, one is actually a good guy, as is revealed in the closing few pages of the book where “good guy” can actually be an appropriate term as opposed to “yet another boring guy.” They don’t come close to being main characters. There are no LGBT characters.

There are more books in this series but I can’t say I’m overly eager to look them up. I can’t say this book outraged me, offended me or otherwise made me hate it – I didn’t risk damaging my tablet by throwing it at a wall. I did risk damaging it by it falling from my hand when I drifted off to sleep. Possibly it’s a matter of my endless disinterest with high school drama books – but there was nothing else of note and even that wasn’t done in a way that sparked any interest