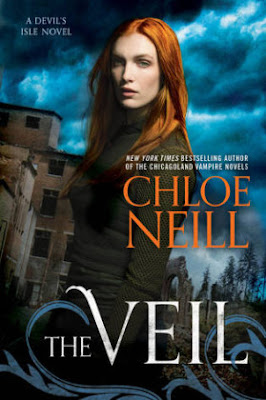 When the Veil ripped open, allowing magic and magical beings entered the world. The war that followed was devastating, reducing much of the southern US to a devastated war zone – or, as it’s known now, The Zone

Now the war is over, Containment controls the Zone and tries to police the remaining free paranormals – and the Sensitives, humans with magic who are doomed to become savage wraiths.

Claire is one of those Sensitives, living in New Orleans and trying to hide her secret – but when wraiths attack she can’t resist using her power and only help from the bounty hunter Liam helps her cover it up.

Liam also knows what she can do to avoid that fate – but it means drawing further into the supernatural world and, on the way, learning of a plot that may re-ignite the war all over again

When this came up in my to read pile, I was happy to jump on it. While we’ve had a rocky ride with the Chicagoland Vampires series, I’m still generally positive about them and was definitely up to seeing this new world that Chloe Neil had produced

And the world is excellent. Urban Fantasy meets dystopia and both parts are covered and blended so well. It’s not a common genre mash and when it is there’s usually a focus on the magical elements rather than the dystopian ones – so how we now use magic to do various things rather than technology. This focuses the other way: we have a large section of the American South that has been devastated by a magical invasion from across the Veil. The land is now extremely unproductive thanks to magical damage, the population has been decimated, the cities reduced to ruinous shadows of what they were before and much of it is contained and separated from the rest of the United States out of fear of magical beings that still lurk in The Zone.

The focus here is very much the dystopia. Most of the cast are ordinary people trying to survive in devastated New Orleans, clinging to a normal life, the celebrations and ceremonies and trying, slowly but surely, to rebuild on the devastation. The book covers this excellently, especially with elements like the ruinous feeling of the city, the battle between salvaging vs looting and even little things like Claire being leery to actually consume luxuries when she gets them (as a shop owner) because she doesn’t want to get used to them – and these luxuries (butter, coffee) are things that did used to be commonly available and she daren’t get back into expecting them.

On top of that we have an excellent depiction of life after the war – hatred of the enemy, the loss people have suffered and are still grieving. They have new ceremonies, new sayings, new commemorative days and monuments – there’s a real sense of completeness to this world that makes it very real. On top of that we have the ongoing threat that Wraiths represent – making the city unsafe, heavily monitored and always with that sense of fear. The themes are really well set, decayed grandeur, stubborn defiance and that edge of worry always there but all turned into a kind of gentle acceptance as well.

Then there’s the nuance of the story as well that works so well because of this rich world: the idea that magic has changed people into Sensitives and these people, innocents, could become Wraiths. Not enemy combatants but still treated as such because they could turn into monsters. Then there’s the supernaturals themselves who are hardly all evil and, in turn, makes for a lot of analysis about the way they are treated and their resistance.

And in this world setting and metaplot steps Claire, our protagonist. Well known in the area, a respect shop keeper, part of the city and its survival – and a Sensitive, desperately hiding from the powers that be that would quickly turn her in, imprison her and watch her become a monstrous Wraith, something that seems almost inevitable

Her widening experience, challenging of preconceptions work so well because this world has been so well established and because she is such an organic part of it. She fits her world so well, the struggles that she goes through directly parallel the things this world struggles with because they are one and the same.

So there’s a lot to praise here – but there are some elements I wasn’t quite sold on. Maybe I’m just a cynic about friendships but I think that Tadja and Gunnar kind of jumped onside surprisingly quickly. Maybe if we road in their heads a little we could see their processes. We do see some of ‘s conflict and her history with her family which also becomes much more poignant and involved it also translates into a lot of her own discomfort. But what insight we see of Gunnar‘s family doesn’t particularly touch him and his opinions so much as introduce new characters, and given that he’s supposed to be a high ranking member of Containment, it’s surprising how quickly he regards the whole organisation with suspicion and becomes their asset within the organisation.

The worst part is the big bad which is just terribly explained. I have no idea why he would want to do what he does – it just doesn’t come close to making sense to me. The logical leap he makes, the huge assumptions he swallows – none of it really makes sense to me. U just cannot imagine anyone behaving this way, let alone him managing to convince people not to simply smack him upside the head and report him to every authority – or just strangle him there and then. I also don’t think the Court and Council, conflict among the supernatural beings and current state of the magical realm was well explained.

I think this is a trap a lot of first books in the series fall into – they’re there to present the world and the characters and this book dos that incredibly well – hut it doesn’t really have a coherent plot to go with it. I think, perhaps, this plot came too soon with too little exploration and development – a pause and a slower, more personal introductory plot may have been better.

In terms of minority characters we have Gunnar and Tadji, Claire‘s two best friends. Is a straight Black woman and Gunnar is a white gay man. I am often kind of leery of this trifecta – straight white protag has a gay best friend and a POC best friend because they’re usually blatant Inclusion Cookie Fodder or sidekicks of some kind. In this book I’m not sure yet but I’ll see how the series progresses. On the plus side they both have families who have been introduced and both of them have issues and problems relating to those families. They both have jobs, though Gunnar’s is very convenient for Claire, is not. They have the potential for their own storylines but I’m not going to sign off on them yet since they were also relatively minor after Claire and Liam and even Burke, largely being introduced to the main plot at the end of the book

We do have several other background POC, like a delivery man Trey and some of the background Containment agents and customers in her shop and a nurse for Liam‘s elderly relative – the overall diverse feel of the city isn’t bad… well… except maybe for the fact it’s New Orleans

I have little to complain about Claire‘s characterisation. She’s devoid of woman hate – and clearly respect a number of other women (I can’t think of any woman she takes an instant or unreasonable dislike to – or any dislike to for that matter). She is hard working, skilled and competent without being uber special or trope laden. She’s not a Mary Sue, she’s not a Chosen One, she’s not a Damsel (yes, she goes the whole book without being kidnapped, even if Liam does help her keep out of Containment hands) the one downside is her romance with Liam. This could develop into something interesting but I wish they would either a) take it slow or b) get on with it. Wanting to dive in but deciding not to for some nebulous reasons (which seem to be partially linked with her deciding his ever reticence is because she’s a dirty nasty sensate and clearly unclean, despite the fact he could easily have had her locked up – even should have done so - for that and he never did). I don’t feel it added anything except some more conflict that wasn’t really necessary.

So, Devil’s Isle series, you have my attention. I love your world, I love the complexity and realness woven through it, I want to revel in it, explore it and uncover every inch of it. I like Claire, I like the conflicts she faces, I like how much she is part of this world, I like how her story is this world’s story. Now I just want to see what happens in this world; if, now it’s been introduced we can have some epic plots that do it justice.