The Awesome by Eva Darrows 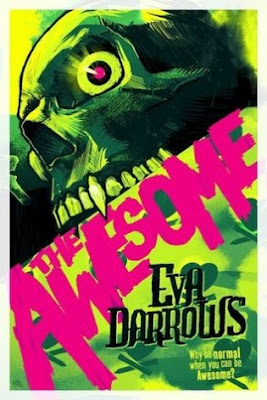 But she can’t be more than an apprentice yet because she is still a virgin. Virgin blood drives Vampires into killing frenzies making them strictly off limits. If Maggie wants to face the big leagues she needs to tackle an entirely new experience: The Sex

And while teenaged boys may be daunting, a new kind of zombies and a vampire cover up may be far more dangerous.

When I first saw this book, I saw the synopsis of “teenaged girl has to lose her virginity to fight vampires” and, I admit, I rolled my eyes and thought “I don’t want to read this.” I then sharpened my snark and prepared to read.

Then I heard that Booksmugglers and Cuddlebuggery had read this book and loved it – this meant that I now had someone to blame should I hate it for many many many years to come. The promise of snark and eternal shame did make things look much brighter

Alas, I have little of either because The Awesome was, indeed, awesome in many ways and all the terribleness I both dreaded and was ready to skewer just didn’t arise.

It was awesome in the way the whole quest to lose her virginity was treated. There was no massive putting of hymens on pedestals. There was no forcing Maggie into sexual encounters she didn’t want. There was no terrible romance tropes marauding all over everything and neither she nor Ian felt particularly exploited, used or mistreated by the other. Even with The Sex being the stated goal for hunting purposes, both Maggie and Ian are clearly interested in their sexual encounter before going ahead

And that sex is perfectly imperfect. As befits two very inexperienced teenagers. It isn’t terrible and they both enjoy it and they like each other and the whole experience but it is certainly not an epic passionate time of skilful sexual maestros causing people to go blind and pass out from the 8 fold multiple orgasm of doom either. It’s awkward and fumbling and not always done right and the bedrooms are messy and alcohol doesn’t help things. It’s excellent, I think it’s the first time I’ve read a sex scene where it was improbably perfect screaming orgasm time while still being happy and fun.

I also liked that Maggie and Ian built a friendship and relationship as well – which was also sweet and fun with them actually enjoying non-romance time together.

I loved that at no point, from nobody, did we get any sex shaming. I loved that virginity wasn’t considered precious beyond words. And I loved how this book even addressed LGBT people being hunters and also needing not to be virgins – since the whole concept of virginity is so completely heteronormative. There were so many ways this trope could have gone terribly wrong – and it didn’t. I’m impressed.

But the romance isn’t the only Awesome element of this book – we also have Janice, Maggie’s oh-so-quirky mother. And she is quirky and hilarious and without shame and completely and utterly open (and unabashedly sexual which we don’t see with a lot of mothers in this genre) and her relationship with Maggie is epic and awesome and funny and wonderful. But more than that, what tops Janice off is she is not perfect – she has insecurities and doubts about herself as a mother because she knows she is so different and quirky. But, behind that, she is still excellent, does her best and doesn’t change herself or Maggie to fit into some ideal even as she has insecurities about it. I also really like that we don’t have a lot of over-protectiveness from Janice or Ian towards Maggie; she is a Hunter and she is respected as such

Which brings me to Maggie who is also awesome. She is a hunter which makes her dangerous and skilled and deadly (and awesome at paintball) but she’s still a teenaged girl without super powers. She can be beaten, helpless and despair – and still be awesome. She can be active and physical and, yes, still be “squishy” and have more body fat than is fashionable. Sometimes this does lead to unfortunate moments like her continually comparing herself physically with her beautiful best friend. Why is there always a beautiful best friend that the protagonist has to compare herself to and decide she is the ugliest hag that ever crawled out of a swamp? Is it a rule in this genre?

Anyway despite her doubts and her sometimes failings, Maggie has that most precious and rare YA quality – confidence. She is the one who declares herself “The Awesome” and not out of extreme arrogance or nightmarish Mary Sue chosen-oneness or because she is ridiculously perfect or flawless – just because she’s damn good and recognises that.
Her voice is also funny and has buckets of snark. Probably too much. I mean, I love snark, I worship snark – but sometimes there is good snark and there is the sense that the author has sat down and is determined to hammer in that snark come what may – THERE WILL BE SNARK HERE! It’s usually good but it’s sometimes derailing. It doesn’t always flow.

Another element I like was Laura. She seemed a little out of place and an add on but I still liked that we had another strong woman in the book and how Maggie developed towards her – beginning with unfair but reasonable fear and slowly growing from there. It was nicely done.

Inclusionwise, we had a POC among the bad vampires who are meet the expected fate. He was also gay and his lover was also among the big bad. They weren’t troped – but they were disposable bad guys with little in the way of characterisation and I’m less pleased that it was the gay bad guys who ended up with the predictable bad end but only them. We had a briefly mentioned lesbian couple of hunters as well. Again, there was nothing to dislike there particularly but they didn’t exactly occupy a prominent role. They were there. They weren’t terrible. They weren’t overly important either.

I think the weakest elements of the book are the plot and world building. The world building is lots of hints giving us a shape of the world – overt supernatural some kind of regulatory agency and licensed hunters, but not a whole lot of detail. I’m happy with that, this was a character based book and the world only really existed to show them off – if there are future books in the series, that can be worked on

The plot is a bit shakier. Not because it wasn’t that complex or twisty because, again, it’s a character based book and in those circumstances you don’t need a complex nuanced plot full of twists and turns and subtleties… but still there were just a few too many conveniences. Laura for example, her whole existence, was a convenience that was poorly explained. Or Jeff, his position and what that meant- again, a convenience to make the plot work but not especially well explained.

These points are all problems, however they’re problems I noticed when I sat down to review, going back and thinking over the book, rather than things that derailed me from the book while reading. That doesn’t mean they’re not problems or issues – but it does mean they weren’t issues that significantly reduced my enjoyment of the book

So it looks like my twitter shaming will have to wait another time – The Awesome is, indeed, Awesome. And yes I should be shot for saying that