The Beauty and the Sadness of Geek Culture 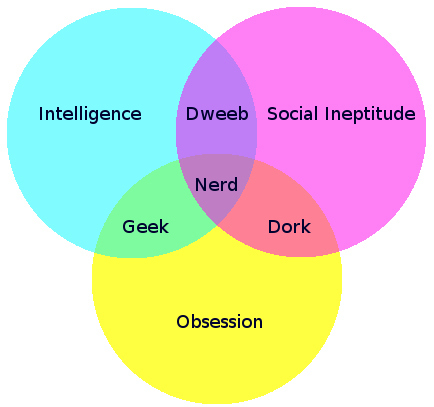 When we think of Geeks socially, immediately the image of someone awkward who lives in their parents’ basement hissing at the first ray of sunlight comes to mind. Geeks are thought of as social outcasts with difficulty relating to people. They seem to live outside of the ordinary aspects of life and instead come to life at the fantastic - a world far beyond our own. From the outside it can seem strange, even puerile when one considers the many issues we have to deal with. Does it really make sense to argue about who played The Doctor the best when we have to contend with global warming, racism, income inequality, homophobia, sexism and ableism?


Geek culture is an escape from the everyday and it is seems puerile that’s because it is sometimes. You know what? It’s perfectly okay. Geek culture allows an escape to some degree from the serious issues this world is dealing with. It allows us to dream about what could possibly be someday, even as it often presents a brighter, kinder side of humanity. Take Star Trek for instance, where money no longer exists, though people do own some private property. No one in Roddenberry’s world is hungry or homeless. Now imagine what that would mean to someone currently struggling to pay the rent and living on foodstamps.


There is much negative said about geek culture by those who don’t understand it and have never been part of it. It seems foreign so it must be wrong right? I don’t understand the references and why these catch phrases make sense. Why is this person yelling Allons-Y, or Geronimo, or asking, would you like a jelly belly? It’s childish rubbish right? Well in short, it’s not.


Geek culture brings people together. People from opposite sides of the world with completely different cultures can come together over a catch phrase like "I'm Givin' Her All She's Got, Captain!" Running into someone wearing a tardis shirt can spawn conversations and even start friendships because immediately two geeks can identify each other and speak their own special language about a show, comic, movie or video game that they are passionate about.  In a world where we spend more time communicating through the internet and texting, this opportunity to relate to each other in real time is something we should celebrate.


I personally have had hour long conversations with strangers about whether or not JJ Abrams has ruined the Star Trek franchise. I’ve argued with strangers about whether the remakes of Planet of the Apes can compete with the original 1968 movie. I’ve jokingly asked obviously geek waiters if there’s soylent green on the menu. I won’t even get into the conversations with Star Wars fans about Jar Jar Binks and their feelings about George Lucas. Opening up that can of worms can lead to a neverending argument.


Even when two geeks take opposing sides on a matter of cannon, the very fact that they have a movie, comic, video game or television show in common is enough to spark conversation and interaction. In this way, Geek Culture brings people together regardless of their cultural differences,ages, race, gender or sexuality and I would go as far as to suggest that because of the way it unifies people at its best, Geek Culture presents an umbrella culture beneath which all can gather. Such is the nature of the unity that it reifies the phrase, “Live long and prosper” to a unique level.


As humans we may not be able to agree on how to deal with Global warming or if Global warming even exists (yes, I’m looking at you, you science denying conservatives) but as Geeks we can almost universally agree that it would be amazing to go where no man has gone before. At the end of the day, this world would be a lot better place if we allowed our dreams of the fantastic to guide us and bring us together.


In light of what geekdom can bring us - the commonality, the culture and even this vast, wonderful community, it is even more sad that there are so many determined to drive people out and wall geek culture off from perceived “outsiders.”


At the moment, geek culture is a hot commodity. Superheroes, aliens, the supernatural - these things are huge. Far from the ostracised outsiders, geekdom has triumphed and is very much mainstream, that culture is expanding beyond all means, that community and commonality now has the potential to be much more far reaching and, with a similar surge of social media, far more diverse and global.


This should be embraced - but too often geeks huddle down around our geeky things like Gollum around the One Ring. We do not want to share our precious, as if more people being fans is somehow going to damage it (as opposed to greater sales and ratings ensurinsg more of the stuff we love being made). We turn fandom into a competition, demand proof of suitable geeky purity, like someone isn’t worthy of enjoying our programmes, books or games unless they can pass an entrance exam. Out of some desperate need for exclusivity, an almost nostalgic craving of outsider status (a status only made romantic by current mainstream dominance), we damage our genre and our culture, limit it’s potential and shared joy we can have in it


And it gets worse when we consider marginalised people. Women are too often sexualised - or shamed as “faking” an interest for some bizarre reason (no-one has ever managed to successfully explain to us why anyone would want to fake an interest in something that bores them for the sake of geek attention). LGBT people and POC are too often accused of bringing politics into the genre (as if the genre has ever not been political!) and expanding the genre to tell more, new, diverse stories (again, it’s bizarre to us that anyone who loves this genre would want to limit its potential). We see people outraged that Walking Dead could sully the family atmosphere of rotting zombies by including a gay kiss and pouring hatred on Black female characters like True Blood’s Tara for daring to fight back and not be oh-so-plucky Sookie.


We love Geek culture and we love that we’re climbing new heights, broader acclaim and an ever widening body of work: but the true beauty of Geekdom is that it can forge a connection between people who are so separate, so different and from such different lives yet they can still talk for hours over the awesomeness of Castiel, the injustice of Firefly being cancelled (yes, we’re still bitter) or how Joffrey being slapped by Tyrion was the single greatest moment on television, ever. We need to encourage this - and keep building those connections and keeping those doors open: not hunkering over our precious and watching it whither because only some of us are allowed to enjoy it.


We love Geekdom, the connections we’ve built and the vast potential it has - but that potential will only be realised if we let it grow and flourish to it’s natural conclusion - which can only happen if we’re all allowed to love it, not some imaginary elite fe.
Posted by Sparky at 9:00 AM