The Possibility of Achieving Inclusive Conventions 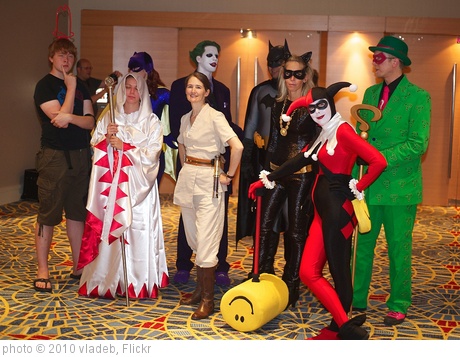 There has been talk on the internet about the issue of fandom conventions being overwhelmingly White (and, frankly, depending on the convention and fandom - overwhelmingly straight and male as well) and how to change that to be more inclusive. That’s an excellent discussion to have and we’re really glad it’s happening.

And there are a lot of good ideas being presented - on harassment policies, codes of conduct, on creating safe spaces and islands, on ensuring panels are diverse (beyond the odd single name) and the marketing is directed more broadly. There have been some awful ideas as well - like encouraging people to bring their POC friend to a convention which reeks of tokenism - increasing the diversity of the convention by dragging POC in rather than making the convention something POC would want to attend.

While these are great ideas, we can’t help but feel that these are addressing only part of the problem.

I envisage going to a convention as a kind of hurdles, with 3 jumps that need to be got over along the way. The last jump is making sure that the convention is welcoming and safe and not succumbing to tokenism. And that jump definitely needs to be made lower and easier - but it’s not going to solve the problem if people are already backed up behind the other 2 jumps.

Jump #1: Inclusion in the Source Material

Naturally this is a problem with most media out there, but it seems often that speculative fiction is especially stubborn when it comes to adopting decent inclusion and is less likely to face comment or criticism for being heavily erased.

Needless to say, that is off putting. While plenty of marginalised people consume - and enjoy, media that erases them or contains tokens there are equally a number who are put off by it and angered by it. Especially when confronted with offensive or stereotypical tokens. Often it’s easier to find supernatural creatures that have been lifted from POC cultures (like the endless Wendigo popping up everywhere) than it is to find actual POC. This erasure is a barrier not just for POC - or any minority - participating in conventions but in the genre itself as the message told, in so many cases, is “these are not stories about you.”

The lack of inclusion also sends a message about who these books are aimed at, who these books are supposed to appeal to and who is going to be part of the fan community. If we have a genre that is overwhelmingly dominated by White characters (backed by a few token POC side kicks and the very odd author who actually aims for decent inclusion) then readers have every expectation of the subsequent fandom of being an overwhelmingly White place. The erased nature of the genre creates an idea that POC are the Other, even invaders, and that the fandom is not their space.

The first hurdle to jump will always be the erasure of the source material. As long as the anchor of fandom - and conventions - is massively, overwhelmingly White, there will be a continued signal that this is not a POC space.

Having vaulted the first jump on the way to the convention, the second jump has to be investment in fandom. Conventions are, after all, an extension of fandom and fan community. They develop out of a wish to see the creators, to spend time with fellow fans, to connect with people who love this genre as much as you do. All the shinies, the panels, the signings et al that come with conventions are based on a solid base of fandom, of mutual love of a work or body of work, of wanting to spend time with people who appreciate it like you do.

Which means, on some level, you want to be part of or involved with fandom. Unfortunately, sometimes fandom more closely resembles this:

Even if you’re just there to see the writers and have no wish to be part of fandom, ultimately fandom will be there. It’s a convention after all, this is ground zero of fandom.

And fandom has done a spectacular job of showing their collective arses at times. Some were big dramatic, internet eating monstrosities like Race Fail ‘09 but there have been a stupendous number both before and since.

This is a major disincentive above and beyond the actual policies of the convention itself, if the fandoms connected to it seem to be full of people who are completely unwilling to challenge racism (or any other prejudice) either in the source material or even among themselves.

Even when the source material does make an effort to be inclusion, fandom itself can insist on Whitewashing - just look at the ferocious controversy around the Hunger Games about Rue being Black - the number of fans who simply could not, would not, accept that this character could possibly be Black. And, worse, when the author insisted, the death of this sweet, innocent young girl was suddenly less impactful or meaningful to them because “sweet, innocent young girl” and “Black girl” couldn’t occupy their consciousness at the same time.

Or the repeated whitewashing of Jem in Cassandra Clare’s Infernal Devices series - fandom repeatedly seeing this character as White despite Cassandra Clare insisting over and over again (and we have to give full credit to Cassandra Clare for battling for this) that he was Asian and even insisting that the cover art reflected that. Still fandom saw a White man.

When people do call out racism there is a huge fandom backlash. Far too often is a complete denial that race (or any other marginalisation happens) actually applies - there’s a far greater dedication to the fantastic in the speculative fiction genre; inclusion of elves and aliens often matter more to fandom than actual marginalised people which are considered irrelevant.

Long running shows and series often face a demand that they remain loyal to their erased formation, as if the show will lose its essence if it becomes inclusive - it’s even seen as some kind of selling out or breaking the nature of the show to bring in marginalised characters. This both upholds erasure and adds the offensiveness of marginalised people’s mere presence being considered fatal to what made a show good and enjoyable.

There is a massive resistance from fanpoodles towards any and all criticism of their precious - and the backlash to analysing any speculative fiction through this lens can be vicious and overwhelming at worst and condescending and dismissive at best. We have seen it repeat over and over and anyone who has been in fandom for any length of time has most certainly seen at least one incident.

With this fandom culture of perpetuating erasure and whitewashing, refusal to consider racial issues in the media and active hostility to any attempt to criticise the media or fandom itself, is it any surprise that many POC do not think a convention made up of these fans are going to be welcoming places for them?

Even if the convention itself takes major and incredible steps to make itself inclusive, conventions are still a creation of fandom. A POC (or any marginalised person) who feels deeply unwelcome or even attacked by fandom is not going to want to go to fandom central or want to be part of such a centre of hostile fan community

Ultimately, we love that conventions are trying - this is essential to try and make these places safe spaces for POC and all marginalised people. But, conventions will not be fully inclusive until the media itself is more inclusive - and the fans that follow that media are less hostile. Change has to begin with the foundations, we can’t polish the roof tiles and call it done.
Posted by Renee at 9:00 AM