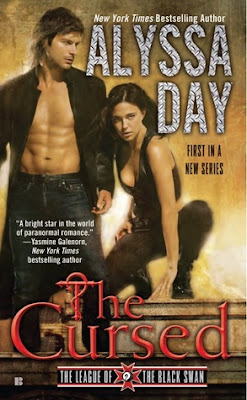 And a part of town with little in the way of laws, since it’s largely free of mortal authority and no-one has stepped forward to replace the last sheriff. And Luke Oliver won’t accept the role. A powerful wizard and the cursed immortal son of Lucrezia Borgia, he isn’t willing to get dragged into it.

But nor did he wanted to be dragged into loving Rio, especially not with his curse. And there’s a lot to be dragged into as Rio approaches her 25th birthday and suddenly all the movers and shakers of Bordertown are after her. Whatever’s going to happen is going to be big – and everyone’s determined to have Rio in their hands before it does.

There’s a lot I loved about this book – world, characterisation, world, the story, world, the different side plots and, did I mention the world? Because I really liked the world.

The writing, while generally good, can get severely derailed in places with description. Particularly of each other – which can go on and on and on and on. And you get a scene where they’re doing something else then it’s back to describing how very luscious the other is and how things are becoming wet/turgid and omnomnomnom. It’s distracting and pretty unnecessary and drags out the plot

In fact, the whole book would be so much better if the romance were curtailed, reduced or at least rendered less dramatic. We don’t have a love at first sight – because they already saw each other before the book started and they fell madly in obsession with each other for no apparent reason. He cut her off and drove her away because he has a Curse (*sigh* get me a bottle) which he thinks could hurt her and destroy him so he has to Drive Her Away For Her Own Good. Which is even more odd because when they finally get round to revealing the curse it doesn’t seem to be all that relationship or love interest destroy-y. It's annoying because he decides, after centuries of flings, that She Could Be the One based on... based on? I mean it's not like he gets to know her before making his decision - so based entirely on his lust he decides he'll fall madly in lover with her so must avoid her? As for her, she has a sad past that has left her with abandonment issues which causes her to flounce out in tears at one point – seriously I had to re-read the page 4 or 5 times before I could figure out WHY she was so upset and decided the whole thing was over. And that's asideHe is extremely protective to the point of actually blowing shit up because he’s so angry and frustrated with his need to protect her (of course, he randomly blows stuff up for funsies when he’s in a bad mood anyway, but we most commonly saw it when protecting Rio or being frustrated in his urge to protect her). Then there’s her deciding she needs to leave him for his own good because… REASONS.

When they were actually together and not tripping over convoluted conflict, they actually bounced off each other well. But that conflict was annoying.

It’s a shame because, once you put that bit aside, the book is extremely good. Not perfect by any means – I think Rio makes a lot of dubious decisions (instantly accepting Kitsune for one, when it looked so much like a trap. Trusting the man who appears later claiming to be family is another major one) that only didn’t blow up in her face due to pure luck. I also thinks there are moments in the book which are a bit too… convenient. The Oblong of goblins supporting her, the troll – it seems she does very very little to get such sudden, instant friends. And I’m still unclear at the end exactly what Dalriata wanted and what he hoped to achieve.

Going past these odd items of writing, it’s really well done and in difficult conditions. After all, the book rests on a mystery – why are all of these major groups and massive powers fighting each other to get their hooks into Rio? Why is Rio so special? Why is she in such demand? That’s a compelling mystery, but the problem with compelling mysteries as the core of a plot is you have to keep the story interesting and the mystery mysterious. That’s hard to do – it’s hard to keep a reader invested in a story when the very point and purpose of it shrouded. But this book does that, I am interested throughout, even with the hiccoughs in writing. There are sufficient side plots with Luke’s own story, the nature of the League of the Black Swan, Elisabeth, the fae Queen’s niece who needed rescuing, even taking Rio on as an investigator and the pressure on Luke to become the town’s sherrify – there were a lot of plots to be getting on with.

Some of those side plots could have been distractions and annoying but they were very well written and paced, linked to the main meta and had sides of humour that kept them intriguing. But above all they showcased more of this amazing world. The idea of this small section of New York City as the borderlands, where the supernatural dwells, with gateways to the lands of Faerie and Demon Rift as well as the prevalence of magical misfits and lack of law and order is a fascinating one. It’s not the first time I’ve seen it down – Simon R Green’s Nightside did it in London but that was much darker than this. This is much lighter, it’s fun and random – and still with the sense of danger and threat but without the darker, sinister edge. It’s an amazing world with a lot of politics that are behind the scenes but a really strong sense that all of this will become extremely relevant to everyone in later books. That’s another thing I like about this world, the random isn’t there just to show how random and quixotic the world is – not even the giant duck – it all relates back to pertinent elements of the world. Even if they’re not essential now, they certainly will be.

And Rio herself is an interesting character beyond her making decisions that are not always that wise and trusting people a little too much. She is kind and friendly, certainly in contrast to the aggressive Luke, and that works for her and helps her – albeit sometimes in convoluted fashions. She refuses to let people talk about her as if she isn’t there, talk down to her or act like she’s made of glass and needs protecting for her own good. She also adopts an attitude that is bigger than she is because, even though she is relatively week, she knows the attitude can help her get by. At the same time, while refusing to be treated like spun glass, she also accepts that she is weaker than most of the big bads out there and there’s no shame in Luke protecting her against them or accepting help. It’s a shame she tends to run off on her own anyway, but the sentiment is there.

POC representation is extremely marginal, seemingly only in passing

Rio does have a very good female friend and is far from alone as a strong female character – with Queen Merelith looming over the book as ruler of the fae and, of course, Alice. Alice is an intriguing character I hope we hear more about – she’s a lesbian which is another plus for some diversity, but other than the fact she’s widely known and feared and can change her shape (which is several kinds of fun when she keeps walking around as A-list actresses)  that’s about the extent of our knowledge with her. She just shows up, shops for them and disappears – and her name helps add kudos to Rio.


So colour me intrigued, colour me interested, colour me hooked. I liked the characters though there needs to be some polishing in places, the plot was well written, decently paced barring the odd hiccough and had enough discipline to make sure all the side plots and deviations turned back into the main plot again. And, above all, the world is one I want to play in and can’t wait to see how this develops. I would like to see some less obsession over how attractive they find each other and the side characters need some more development and Rio needs to make more sensible decisions

I’m in on this one, definitely worth a read - so long as the romance either cools down or gets a big lump of realism