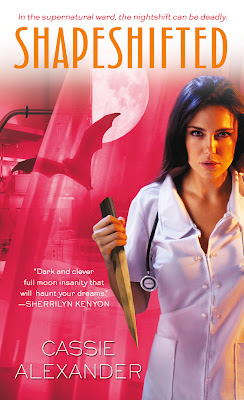 Edie is depressed. Since being shunned by the vampires and losing her job on Y4 she has settled into a much more routine, much safer existence as a nurse in a sleep clinic

It’s also dreadfully deadfully boring. She’s lonely, she’s lost purpose and she’s lost the advantages the Shadows could have given her

Which would be especially useful when her mother reveals she has terminal cancer. Only a miracle or magic could save her. Or vampire blood

Which means Edie needs a new way into the supernatural community that is shunning her. Chasing what desperate leads she can takes her to a charitable clinic in a poor area of town, searching for Santa Muerte. Working again as a nurse, she quickly finds herself in a much more energetic and dangerous environment – there may not be werewolves and vampires coming through the door – but there are gunshot wounds and gang members.

And something far more involved – magic and vampires hidden carefully from her, unless she can get someone to trust her with their secrets and maybe give her the key to healing her mother.

Why are you still here? Go read it! Go go go!

You haven’t read the previous books? Then go, read them, then read this.

Ok, fine, I suppose I’ll do a review beyond “awesome.”

I didn’t only not know what was going to happen, but I was completely surprised on several occasions. I can’t even refer to them without providing spoilers which would be a crime against humanity for which I would be (rightfully) shot. But I was very very surprised indeed.

It’s this uniqueness and surprise that makes it hard for me to talk about the plot because its originality is something precious not to be spoiled. But in terms of pacing, style, descriptiveness and general writing skill, this book hits the spot. It’s descriptive enough to get a full, powerful sense of the setting, without being overdone and dragging. We have the twists and the mystery and Edie’s lost, confused frustration of it all, without it being slow or slumped while at the same time not rushing through these scenes or skipping over any side issues. It’s an extremely well written book that you can easily read in one setting with brief pauses to growl angrily at people interrupting you; I suggest stocking up on aerodynamic objects for easy throwing.

I also really liked Edie as a character. She is strong and capable and competent within her field, being intelligent, hard working, dedicated and compassionate – which doesn’t involve super combat skills or being the most beautiful of them all or some special shiny magic power that is more special and shiny than them all. She has a life outside of the woo-woo, she has a family and thy have real, mundane problems that hit mundane, real people all the time. She has a job, she makes money, she needs to make money. She is a good person without being a dramatic, martyred saint. She gets irritable, she gets tired, she feels disgust when some poor unfortunate is filthy or smelly or otherwise revolting even while she helps them.

She’s such a real character – part of that is her job, this is one of those books where you can tell the author knows the profession inside and out – Edie is a nurse and it’s clear that Cassie Alexander is a nurse as well. But it’s also how she lives and reacts – like the time she spent on Y4 were high stress and dangerous – but now she is without that daily danger and that daily purpose of saving people’s lives she is not just bored but depressed as well; she has lost a lot of meaning in her life, even when it came with risk. Not only meaning but friendships and connections, a wider family of people who liked her and understood.

Her desperate urge to cling for a solution for her mother comes close to her doing the same for her brother (even as she has reached her last straw with him – again, not a saint) and even though, as readers, you can say “no stop, bad idea” it’s also clear that it’s something we’d all do if we had any possible hint of a way to save a parent. But at the same time this excellent, real character grows and by the end of the book we have her overtly addressing the fact she constantly lives for other people and needs to start making choices that put her more front and centre.


There are a number of excellent strong characters with complex motivations – that are inferred even when not overtly stated. La Reina and the trouble she has had adapting, how much she lost, how she’s trying to get by and stay free even if it breaks all tradition and seems almost impossible. There’s Hector struggling to keep his clinic running. There’s Olympio with his ambitions, need to help and cynicism all mixed together – and great faith in his curandero grandfather which, in turn, is a wonderful mix of miraculous healing and complete failure depending on what needs healing. There’s Catrina, again, cynical and hostile, tough and resilient but ultimately determined to help people and save her family. Ti struggles with his reality of what he is, in many cases seems ok with it and yet he throws everything he has and everything he can into overcoming it, he seems light hearted, gentle and even fun but there’s a level of pain above and beyond that. No-one’s just one thing, no-one’s just what they seem.

There are a large number of POC in the cast – Ti is Black and there are a large number of Latino characters. It is a poor neighbourhood and there is a lot of gang activity and the vast majority of the Latinos are involved in woo-woo of some kind – but then, over the series we have seen other Latinos who definitely aren’t involved in woo-woo or gang activities so it’s not a trend for the ethnicity as a whole – just when Edie is hunting down woo-woo in a very poor area. There’s a lot of discussion on class which links in with how both the powers that be and the police regard the poor, predominantly Latino, neighbourhood. There’s even a comment on how the mayor’s unsubtle, for-the-press crackdown on “gangs” is causing far more problems for the area than it is solving.

There is culture and woo-woo there, but it is treated as a thing of power rather than something to be mocked and ridiculed – ad, as said, we have also seen Latino characters in scientific and modern western medical settings as well.

There’s a lot of sympathetic presentation of the poor, the homeless and the addicts – and it’s more sympathetic and humanising for not being sugar coated. Her drug addicted brother steals. The homeless addicts have little opportunity for anything resembling hygiene or decent medical attention – and she mentions this AS opportunity, not shaming them for being filthy or not tending their various ailments, but acknowledging the barriers there are. And even when disgusted by filth or frustrated, she remembers those limitations – and that addiction is an illness that can’t just be cured by willing it – expressly comparing it to her own mother’s terminal cancer.

We have romance between two women, La Raina and Adriana, one kidnapped and the other desperately searching for her. And it is presented as real and loving and meaningful as any other romance. There’s no expectation that they are less desperate to see each other, less determined to find each other than if they were an opposite sex couple. They clearly care for each other, desperately and passionately. They are both willing to sacrifice for the other and make the other a higher priority than themselves. And La Reina is not only expected to want to find Adriana, but is considered to be at least as invested in that search (or even more invested in it) than Adriana’s sister.

Really, what more can I say beyond repetitive praise? I’m going to even hold back on that because there’s so much here I want to praise but equally so much I don’t want to spoil. Get it, read it, love it.