The Registry by Shannon Stoker 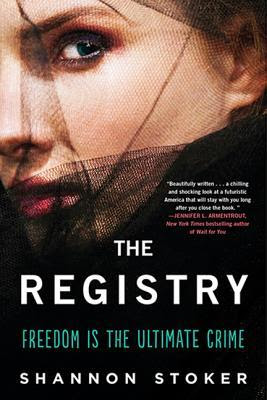 The Registry is set in a dystopian America.  The internet is filled with American propaganda.  The boys are largely thrown out by their parents and forced to fend on their own.  Girls are raised by their parents and are little more than commodities.  On their 18th birthday, girls are placed on something called the registry and they are sold to the highest bidder. Boys and girls are raised to believe that this system is for their own benefit and will lead to the best versions of themselves.  Girls in particular are raised to be obedient and to believe that their soul job in life is to please their husbands and in return, their husbands will cherish them and lavish them with attention.

Mia Morrissey believes this until her older sister escapes from her abusive husband and tells her that the registry and the marriages that result are a sham. Corinna tells her about a magazine article that she has hidden in her former room, before she is dragged away by her husband as their parents stand idly by.  When they get news the following week that Corinna is dead, Mia determines that she will lead a different life.  With the help of her friend Whitney who's price is so low she will probably end up being married to the government, and a young boy named Andrew who she blackmails into helping them, Mia makes her bid for freedom.  What she does not count on is that Grant, the man her parents sold her to, will do anything to get his hands on her and harm anyone who comes to her aid.

From the very beginning of the book, it really felt like a sort of like a modernized version of The Handmaid's Tale by Margaret Attwood.  The Registry was justified by a war that the U.S. had engaged in and supposedly won.  Though at this point it has only be 100 years since this system was instigated, society has largely accepted the reduction of women to property. Once a girl marries she never sees her family again.  Even if parents decide not to put their daughters on the registry, government agents drag them out of the house by force.

For me The Registry got off to a very slow start.  Part of the problem was that I didn't like Mia the protagonist at first.  Her naivete was irritating but as I came to realise just how isolated her lived experience had been prior to her escape, it made perfect sense.  Once I accepted this fact, I found it easier to settle into the world Stoker had created. I was however not happy with the super special protagonist that Mia represented. Was it necessary to turn her into an absolute beauty, who all straight men universally desired to make her story interesting?  The horror that the registry exists at all would have been more than compelling enough to make this story work.  I think it detracted from the story to have it all be about the special Mia and her bride price.

One of the things I liked about this book, is that it included a GLBT couple.  Far too often in dystopian fantasy, the GLBT community is soundly erased to promote the narrative of straight, White, cisgender able bodied men saving the world.  In the world of The Registry, two men are able to marry for love and it is considered completely normal. Alex and Frank clearly love each other and they are the first and only representation of a romantic, loving solid relationship that Mia comes across.  The moment I saw this, I must admit that Stoker completely drew me in. In a world in which gender roles are strictly defined, it was however unfortunate to see Stoker continue that line of thinking into the characters of Alex and Frank.  Two men in a relationship, are still two men and they don't fall neatly into a top and a bottom.

I didn't read any of the characters as being of colour.  In dystopian fantasy people of colour are often erased unless we are used as fodder.  I personally prefer the erasure but recognize this as the lesser of two evils, rather than optimal usage of characters of colour.

The Registry is an absolute statement about the oppression that women in a patriarchal world.  It's interesting that it is set up like a dystopian because the reality is that while something like the registry does not exist on a national level per say, women are sold everyday against their will to men and treated as second class citizens. The Registry is meant to be read as horrifying because it is happening in the so-called gender advanced U.S..  The problem of course is that women are raped, beaten, murdered and abused for being women in the western world already.  I'm not sure that I completely bought into the concept of this novel, though I will admit that it is timely considering the ongoing Republican war against women. I will however state that I enjoyed the fact that Stoker showed how this patriarchal state damages men as well.  It has long been said my womanists/feminists that sexism hurts men too and Stoker did a great job in illustrating this point.  For what it is, The Registry is an interesting read and I can most certainly see it on the reading list for a first year woman's studies course, however; those with a background in womanism or feminism, might easily find the premise itself problematic because patriarchy and the oppression of women is cast as a fantasy, rather than a reality of the world we live in today.

Editor's Note: A copy of this book was received from Edelweiss