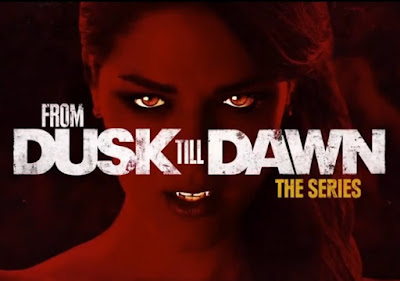 Seth and Sonja have just been confronted by an unpleasant man with a gun who has just figured out that Richie and Seth are the infamous Gecko brothers. Seth decides to be condescending to Sonja and we have a three way argument with guns – and Seth’ uncle Eddie happily steps in to shoot the guys. Now someone has to clear up the mess.

Eddie has some rather bizarre reticence to share info with Seth despite the big guys with guns. He finally tells Seth about a truly massive illegal operation run by the “Browns” covering most of Texas and worth $33,000,000; and somewhere in the middle of it is a huge warehouse full of lots of skimmed profit. And Richie may have stumbled onto it (So I take it this network is Malvado’s).

Santanico has been imprisoned and tired up by Carlos. Of course she’s in her underwear. He shows her the shiny new knife he has after his little trip into the labyrinth. He’s determined to bring her back to the show which she absolutely refuses to tolerate.

Paloma and the other girls are still locked up and ready to be shipped out. Richie is being held by the nast pimp who calls Narcisco to let him know how everything has gone weird with Carlos and Santanico. Nasty Pimp doesn’t listen to Narcisco and seems quite put out by the fact Richie is listening to a ghostly Santanico rather than his threats. Richie’s more focused on following the plan (per ghostly Santanico) when Seth spoils things by rescuing him and shooting the guy. Clearly Richie has to eat everyone then.

Richie is not amused by this. The brothers get right to bickering as they leave the bodies behind, since Seth is a little annoyed that Richie has dragged Eddie into lots of trouble. Seth won’t let him leave until Richie tells him about the truck of “flesh” that is being sold to the “browns” (and, yes, Seth is disgusted at the idea of peddling women though Richie insists none will be eaten). Seth insists on coming with him in looking for the truck.

Eddie is also not very happy with Richie. He’s quite… vehement about it. They snark back and forth endlessly. I do like how they bounce off each other. Anyway, Eddie has found them a corrupt sheriff who could help. Richie wants to bite him, Seth vetoes the idea and they go for huge bribes.

Time to catch up with the Reckoning guy, he is still tracking down Richie through nasty means, eating flesh, killing people, et al.

Carlos forces a muzzle and leash on Santanico and takes her to one of the shrines where she is worshipped. Santanico seems quite horrified to realise a whole religion has been built around her. She protests that she didn’t want to be a goddess and can’t help these people even as they cower away from her as he rips off her clothes. But, surprise, Carlos wants to help her kill Malvado – which Santanico is fine with but rather do that without having to put up with Carlos as well. She scorns him as just like Malvado, another man who wants to enslave her – and he does a blood sharing ritual so she can see his memories to show off his time in the labyrinth in which he saw Richie and Santanico together and happy for ages while he got old and finally ripped out his own fangs. It doesn’t convince Santanico. It doesn’t work – and the reminders of who she was only tell Santanico how much she’s lost. She then goes full snakey and attacks him. They fight but, again, Santanico is clearly the more powerful vampire and nearly kills him

Except the Reckoner catches up, how irritating. She runs off – and flies off (yes she has wings).

Seth and Richie catch up with the truck containing Paloma and the other women and Seth drives him off the road (even though Richie said they needed to follow them). Seth isn’t going to follow truck and let them deliver the girls, he’s going to demand answers from the driver. Which ends up with him being killed: again Richie is pissed that their lead has dried up.

They finally find the delivery site and free the women while the sheriff speaks to Malvado and gets his pay off and has his face ripped off. This seems to be Malvado’s party piece.

Back to Katie and Scott and Scott is trying to eat Katie until he is stopped by Freddie the Range and a big shotgun. They fight and Scott gets badly beaten and chained up but Kate intervenes to stop him – since she called him in the first place. Freddie isn’t willing to let Katie control the situation since he’s just seen them both bury a body. This does not earn you brownie points. It does earn Scott a stake-contraption strapped to his chest. He wants Scott to tell him what Malvado and gang are up to.

He wants Scott to tell him about the bodies he found and the symbols carved on them as well as the codex. Scott tells him about the 9 lords, that Malvado is one of them and they run an organised crime ring. Kate tries to convince Scott to keep playing nice while Freddie performs his own ritual – cutting both his hand and Scott’s hand with obsidian he mixes their blood and is able to see Scott’s memories. Ok where did he pick up that trick from? Anyway he sees the prophecy Malvado is obsessed about.

He wanders off leaving Kate to try and get through to her brother through childhood memories – including how 8 year old Kate resented the hell out of her adopted brother and was even behind him being given a western name. She talks about how god forgives her for being such a terrible kid (always nice and self-serving) but how she now loves Scott even as a vampire (and calls him Jiang Jun, his name) and how they can totally work it out even with him as a vicious human eater.

Freddie studies his symbols and asks for Kate to help him the vampires. Kate agrees and volunteers Scott – except Scott has run off. Freddie and Kate go looking and find a whole load of corpses apparently left by Scott. Kate asks to be trained how to fight because Scott has “made his choice”.

The “browns” really? At least on the plus side everyone calls out that calling a gang of Mexicans “the browns” is hella racist.

I really really want Santanico to eat Carlos. As I said last episode, so much of this series rests on the exploitation of women with their bodies used as set decoration that Santanico needs her revenge and, more than that, she needs her agency. She does not need to be led around in a mussel and leash.

Scott and Kate’s speech – there’s a lot there. Childhood Kate’s reaction is very understandable especially since she recognises how wrong it was – it also touches on what transracial adoptees, especially from a different country, have to go through (with Scott even losing his name) which is something that has never been touched on before with this character. Kate’s “god forgives me” is rather self-serving but a) she was a child and b) sadly I feel the same about that line whenever it’s trotted out (“god forgives me” is convenient in that it requires your own affirmation rather than the affirmation of people you hurt). Her admission of being wrong and how much she loves him as her brother would work really well. Except she seems to link his “othernesses”. By commenting on how other he was as a Chinese person, how she didn’t even learn his name and then linking that to loving him as a vampire “loving him no matter what he is”. That line, there, makes me cringe “I love you no matter what you are, Jiang Jun” which clearly links the “what” not just to him being a vampire, but also to him being Chinese. They are both presented as equally other in that statement.