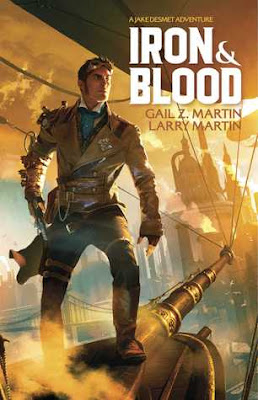 Jake and Rick, with their cousin Nicki, work for their father’s company retrieving hard to find items at very high cost for their very rich clients. Unfortunately, not every item is safe nor is every client as they find out when Jake’s father is murdered

They must return to New Pittsburgh, ducking hired killers along the way to uncover a conspiracy that is festering in the city and goes far further than a few items they transported.

There’s a lot about this book I love.

I love the characters – each of these characters has so much potential for being a book series in its own right. I love their history, their interactions and just about everything about them. In fact, this becomes one of the problems simply because they can’t all be suitably awesome at all times

I really love the world setting, the Victorian industrialness with a touch of steam punk and a whole lot of magic and the supernatural being added to really richen the whole thing. It draws upon the supernatural from many European superstitions and belief systems and does an excellent job of creating a city that is defined by its immigrant populations. The different neighbourhoods, the way the city works and the immigrant diversity come together in a really rich tapestry. On top of the magic and industry and aesthetics and Victorian etiquette (which can also be used for the best humour    (“Get out of here, Aunt Catherine. You’re in mourning. You can’t be shooting people, it wouldn’t be proper.”) there’s also some really excellent analysis of class. How workers are constantly used as fodder and disposable, the battles of the rising union movement in the face of the mine owners who are willing to raise armies and massacre the workers as well as the restrictions that are hemming in women. We also have the Oligarchy, the very essence of the entitled Robber Barons of the era and their near untouchability along side the disposability of the poor and how little their deaths matters

Class moves nicely in to the immigrant cultures and works alongside the supernatural and magic and world building to make for a truly excellent world building. We throw in some extra bonuses like Kobolds which suggests a whole lot more supernatural creatures lurking and permeating every level of society.

The plot itself draws on every element of this – the supernatural and monsters. The untouchability of the Oligarchy, the disposability of the workers. Magic being used in shiny and scary ways. Massive industry and super-steampunk devices. It was all displayed and it was just so huge and so much fun

Ok, problems, alas, there are problems. For me the biggest problem was the switching POV. I’m not against POV being switched, I quite like following different characters. When done well this lets me see the world and the characters through different lenses and allows for a lot of fun nuance and possibilities. But when done badly it can be clumsy, and this is clumsy on several levels. Part of that relates to the many many many many characters and all of them basically following the same clues and making the same revelations separately. And then recapping each other at great length. The whole book feels a whole lot longer than it needs to be and very repetitive as we just go over the same ground over and over again with different characters.

This is exacerbated by some of these POV characters being the actual villain. Not just is one of the POV character a villain but pretty early in the book we get him and his evil partner basically expositioning their entire evil plan. Almost as soon as the book starts I know who the bad guys are, what they’re doing, why they’re doing it and how. Literally every last scrap of mystery about the bad guys’ master plan is revealed really early on.

Then we spend the rest of the book with our heroes trying to discover this plan. Which we already no. This really adds to the repetitive feel of the book – we have pages and pages of the heroes questioning, researching, discovering and discussing something we have known almost since the book began.

So the book does feel so very long compared to what it is – which isn’t helped by a truly huge number of characters. Sooooo many names, so many many names and I have rather a lot of trouble keeping track of them all. This frustrates me because I’m interested. Even when I’m trying to juggle these 80 gazillion characters, the ones I remember and can pin down are really appealing. I love Nicki (swashbuckling female character) and Cady (female researcher) and Catherine (Jake’s mother and perhaps the subtle power behind the throne) and am frustrated that they felt superfluous to this actual story because there are so many people. I like the relationship between Jake and Rick with Miksa thrown in (the two heir apparents of the company and their bodyguard) but we don’t really have time to develop it. We had Adam and his super-science and a whole lot of shiny items which people are fighting over and the expert dirigible pilot… sooo many people. So many great people…

This related to the supernaturals as well, Renate, the Absinthe witch (which is an awesomely different and weird concept I loved) and Andreas the vampire witch and, again, no real development, on top of a couple of Agents working for a government supernatural agency that is mentioned and looks very interesting and just isn’t really developed.

I’m left with the feel that we have several REALLY EXCELLENT books here. Nicki & Cady together? That’s a duo leading a book series. Renate and her witchery? That’s a book series. Jake and Rick running their adventurous retrieval company and occasionally duelling? That’s a book series. Drostan the detective who can see ghosts and is solving supernatural cases with his contacts with the police and medical examiner? This is another book series! These would make several awesome book series set in the same world, occasionally guest appearing in each others’ series would be really awesome. But smooshing all these characters and their stories together in one book is just too much – none of the awesome concepts have the chance to really develop and become the awesome storylines and the awesome characterisation. It just saddens me, it saddens me because this book should not just be 5 Fangs, but ALL THE FANGS because it has the seeds of absolute awesome in it – which just isn’t realised.

Alas, the diversity is poor as well. There are no memorable POC – all that diversity if immigrant groups and excellent look at class and different cultures is really limited to white Europeans. All the immigrants and their cultures are really eastern Europe, there’s no real depiction of Black or Asian or Native American people or Latino people adding their own culture immigrant mix to this melting pot. Given how well this is done so far, it’s disappointing that the same attention isn’t given to non-Europeans. There are also no LGBT people

I really liked Catherine and Nicki and Cady and Renate – but there are still relatively few female characters compared to the sheer number of men. I also feel like they were kind of relegated to a side role, their storylines were somewhat after thoughts or an aside to other storylines and characters. Nicki spent most of the last battle in the airship, watching which was kind of sad and a terrible loss of her full potential.

This book has more potential than almost any other book I have read this year. It should be awesome. There’s no excuse for it not being awesome. I am damn annoyed that it is not one of my favourites of the year. Alas, there’s just far too much squeezed in for any of it to flourish. I do hope though, with this all established, that the second book will be more allowed to develop

And won’t include the villains expositioning their plan in the opening chapters. That’d also be nice.