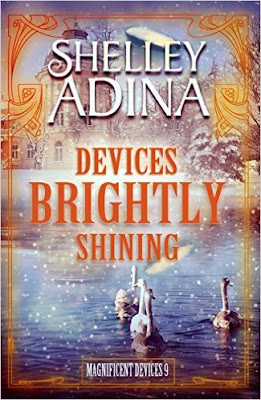 It is time for the event of the season – the Dunsmuirs are holding a party to celebrate Claire and Andrew’s marriage and everyone who is everyone will be invited to take part.

Of course that includes Claire’s best friend Alice and her fiancé Ian. And Alice is beginning to realise what it means to be marriage to a British noble – and while she loves him, she’s having second thoughts about everything that comes with him

Gloria Meriwether-Astor’s cousins also arrive and, of course, get an invite – but in the process the tensions in the family and in Gloria’s family business come to light

This is a short story, and pretty much an ideal example of one for me.

The plot is fun and works so well with the rest of the world. I don’t think you will need to read this book to transition from the last book to Gloria’s adventures in the next novel. But by reading this it nicely will fill in a lot of gaps and really set up the next chapter. We’ve been introduced to the new principle characters and the details of the conflict. It’s a truly excellent prologue that really tells us why all the characters are there and what they are doing and their goals.

The next book can launch right into the story because everything has been excellently established without the need to make it essential. For me this is exactly what a short story needs to do – add richness to the world and characters without making them an essential component.

It also does this through a fun little story. It’s not super-dramatic and it’s certainly not action packed. But that’s a good thing – Claire et al seem to spend so much of their life in peril and action that this is an excellent change of pace. Why not just have a party? Let’s see these characters living together, dealing with something relatively mundane together – it’s lighter and fun because of it.

It also has some very nice challenges and examination of sexism of the era. There’s the obvious – all of the women are planning their own lives. Even better, they’re all planning different lives, different paths – because there’s more than one way for a woman to live and be strong and express her agency.

There are some excellent call outs – Alice fighting fiercely and courageously against the idea that she cannot captain her own airship. This is the kind of thing I’d expect on most female led steampunks at this point.

But, better there’s some really nice examination of femininity of the time. Too often in the genre and media in general, when we get “strong” women, they spurn all things deemed feminine (the scene where the big tough female protagonist is so inept at fashion that her male love interest/brother/friends has to dress her has become an actual trope). Claire and Alice in particular aren’t exactly fans of fashion, nor do they relish the idea of living as a traditional lady of the manor, but they don’t spurn roles. The way they talk about the work a Lady has to do, the social obligations, the organisation is very respectful. They wouldn’t want to do it themselves, but they respect the effort and skills involved. The same goes for fashion, even while Alice is not a fan and Claire considers is an acquired skill set – she still does regard it as a skill set. They talk intelligently about the nuances and implications of various clothing choices and what they mean and what careful choices go into it.

It’s nice to see protagonists who don’t necessarily care about fashion or more traditional female interests or roles but they do respect them.

I also like some nice character development – Claire has clearly learned from her past experiences of not needing to run off to every adventure. She trusts Alice and Gloria to be able to handle their adventures and problems themselves – she has faith in them which is also really nice to see in a book series. The books are already turning into far more than Claire’s story and I’m happy to see that.