Thinning the Herd by Adrian Phoenix 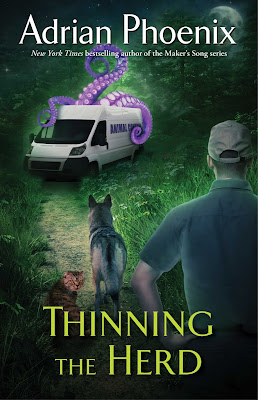 Fortune tellers and hippies are dying in large numbers in Oregon – only noticed by one man. A man sworn to protect the city, a hero in his own mind, a man who knows the secrets of the supernatural

Hal, a Dogcatcher, And he wields a mean catchpole.

I just… can’t even begin to express my opinions about the protagonist, Hal. On so many levels he’s a parody of awfulness. He’s clueless, arrogant and ridiculously full of himself and his abilities and his roles. He is also skilled, talented, brave and in some ways every bit the hero he thinks he is. At the same time, while he’s an appalling joke, he’s constantly treated as that – he’s often terrible and ridiculous but, at the same time, I think we’re fully expected to see him as that. He’s awful, but I don’t think we’re meant to ignore the fact – hence his constant abuse of poor cyclists for example. I don’t think we’re expected to see his truly epic fighting skills and not think that he’s also totally a cool person which he clearly isn’t.

And I can’t deny that he’s funny. His interactions with the people around him, his ridiculous belief that he’s not just a superhero but that everyone fully knows about it. His firm refusal to deal with reality, his happy poking of corpses… it’s funny, it’s really really funny.

I just don’t know with this guy. I alternate being repelled and amused by him – and I think that’s intentional

It helps that some of the characters around him – especially the two other main characters: Nicka and Galahad - is pretty amazing and hilarious. They are both yokai, kind of reverse were-animals, animal that become human during the day. So we have a cat, with all the immense sarcasm that requires, and a wolf – who can easily be distracted by a well thrown squeaky toy (of course, the cat can easily be fascinate by a bell as well).

The three of them make for a hilariously combination. And I like the idea if were animals that aren’t you classic human-to-animal because why not have both? I’m not so sure about calling them “yokai” though, especially in a setting that has no Asian characters.

I also like what Hal is, an animal control officer. I like the idea of a world setting where the supernatural is hidden and the question has to be asked, who would know? Who would know the reality of the world and, yes, a dogcatcher is a good example of someone who would probably know.

I hate the relationship between Hal and Desdemona. In some ways it starts well. Yes, is creepy and a stalker – and he is labelled as that. I actually liked how we repeatedly see him be revolting and disgusting to Desdemona and she keeps calling him. He’s ridiculous and awful and stalkery and disgusting and she treats him appropriately for that – insulting him, rejecting him, trying to drive him away. In a genre – and media in general – where this kind of creepy, stalkery, disgustingly predatory behaviour is repeatedly held up as romantic.

Except… they end up together. I’m not even going to spoiler warn it because it needs a trigger warning not a spoiler! She calls him a stalker, she calls him jerk and creep. She rejects him at every time and he just pushes and pushes and pushes and pushes and suddenly he wins. It doesn’t matter how awful you are or how much that awfulness is called out – if, in the end, it works then it undermines every last attempt to call out the nonsense. People can call something out as wrong – but the reality you’ve created is challenging this

There are several minority characters playing somewhat secondary roles (the three main characters: Hal, Galahad and Nick are straight, white, able bodied men, the next most prominent is Desdemona, a straight, white able bodied woman). Louis is a gay Black man, Lawrence is a gay man, Della is a Black woman.

All of them are interesting, several of them are powerful and skilled and even desired for their wisdom and power and guidance and help… but there’s some unfortunate tropes as well.

Della makes a nice ongoing joke about how a Black wise woman guiding a white protagonist dies in nearly every media depiction – nicely poking the trope. And it would be a fun poking of the trope (along with a lot of hilarious biplay between the characters about whether or not she’s guiding) but it ends with a kind of embodiment of the trope.

Then there’s Louis who, as part of the ritual for no reason at all, has to have sex with a woman – he is raped by a woman to make the woo-woo work. There’s absolutely no reason for it, no story reasons why his magical involvement in this plot requires him to be raped by a woman – it’s just thrown in there. We don’t have enough about Lawrence to characterise him beyond really being there.

I just… don’t even know where to go with this book. I find myself in the odd position of actually really really enjoying this book – this hilarious, silly, so very often wrong book. It was fun, it was ridiculous, it funny, it was, at times, even epic in a glorious, over the top action movie kind of way, it was cartoony and yes it was often puerile

And I enjoyed it. And I kind of feel embarrassed for doing so