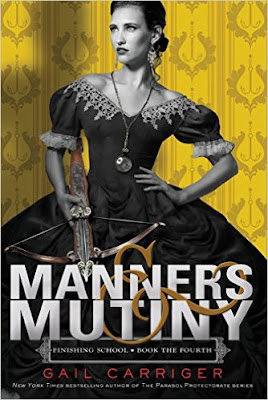 Sophronia continues her education in espionage at Mademoiselle Geraldine’s floating school – all the while fully aware that nefarious plots are afoot. The anti-supernatural Picklemen are still plotting to overthrow the established order and their schemes are well hidden.

As if that weren’t sufficient distraction for Sophronia, there’s also Soap. Now a werewolf, the former Sooty sees much more hope between him and Sophronia than there ever was in the past – but how far from social convention is she willing to deviate?

It all makes it very hard to focus on her lessons. Especially when all her training is finally put to the ultimate test

Sophronia I predictably awesome this book. As ever she is skilled, intelligent, capable, dangerous and fun. But she also has some nice growth and moral questions – including asking just what she has become with her intelligencer training. Has every interaction become just another mission for her? Has she become cold? Has she become completely incapable of trusting? As is asked on numerous occasions, has she become hard and cold?

One thing I really like in this book is not just Sophronia being, predictably, awesome and amazing – but her companions being almost as awesome as well. Agatha, Dimity – both far too often her sidekicks (not weak by any means, but certainly lesser in comparison to the awesomeness of Sophronia) who’s weaknesses are far far more clear than their actual strengths. They are defined more by their frailties than their strengths

And in this book we see their skills excellently portrayed. We see there are many ways to be an intelligencer. This series has always done an excellent job of taking the trappings of traditional Victorian femininity and making them strengths (which I think is sorely needed because so many books with “strong female characters” are strong because they eschew all things feminine. We have scene after scene of women who disdain clothes and make up and anything deemed female which is why they are strong. It’s unusual and powerful to have the feminine be strengths). This book goes a step further to make a lot of different forms of feminine strengths. Whether it’s Dimity’s gossip and social butterfly flitting or, equally, Agatha’s quiet, hidden wallflower nature. Always on the outside – but always seeing everything. (And I really love how, along with Sophronia, Agatha has found a way to forge her own future, free from the expectations and demands of society and her family. Agatha has courageously chosen her own path even as everyone acknowledges the risk she’s taken doing that).

Even Monique, long time enemy of the series, showed her worth and skill. I really love this, where the Exceptional Woman is still so common, seeing an awesome woman surrounded by awesome women is excellent. I even like how Sophronia’s much mocked sister is given some humanising. I do wish Prieshea had received the same treatment as the only WOC in the book

The depiction of Soap is interesting – and very very satisfying. Throughout the series Soap has occupied a difficult position – while clearly the man Sophronia was most connected to and most attracted to, prejudice seemed destined to keep them apart. This is one of the elements that has been well presented through the series – it would be dubious and problematic to pretend that the era was not grossly classists and racist. It would be a complete denial of the prejudices of the time and the atrocities of history to think that Sophronia, an upper class white woman, could possibly marry a Black working class man without there being considerable problems. We see other teachers dismiss the lives of the Sooties as being completely beneath notice. Sophronia repeatedly says that she cannot be with Soap because of her reputation, because of the strictures of society.

Yet along the way we see her loyalty to the Sooties repeatedly. We see her value the Sooties over and over, wanting to rescue them, fearing for their pain and suffering and impressed by their skills and capabilities. She’s also very very clearly deeply in love with Soap, something that was clear in the last book when she sacrificed her future patronage for him and is only repeated over and over in this book, especially since Soap now sees his new station in life makes the seeming impossible now possible.

This is an example of prejudice of the time being portrayed, yet at the same time both obviously overset and challenged with a very satisfying ending

The only LGBT characters in this book are only recognisable as such due to gross stereotyping rather than overt labelling and knowledge of previous books. Lord Akeldama continues to follow many of the same cringeworthy tropes. I also dislike the depiction of mental illness we have here with the vampire teacher. It’s unfortunate that fiction continually depicts the mental ill as violent, dangerous and incapable of sensible or rational communication – needing to be handled like small children carrying bug guns.

I think this book is the last in the series, though I am confident that, given the other books in the same world setting, this is not necessarily the end of these characters. The storylines of Soprhonia going to school have certainly been brought to a very satisfying conclusion. All the plotlines have been nicely brought to a close without any threads left dangling – and without any storylines ending clumsily or abruptly. Sometimes when a book series ends it feels like there was a rush to cut some plot lines short – no real ending was planned so they were hurriedly forced to a conclusion. Here everything came naturally to a close while still making it clear all of these characters could have more stories in the future. Sophronia and Soap, Agatha, eve Dimity – any of these could go on for so many plot lines or be part of other people’s stories in the future – the world grows full of these excellent women and I just hope we get to see them all reappear in the many stories of this world