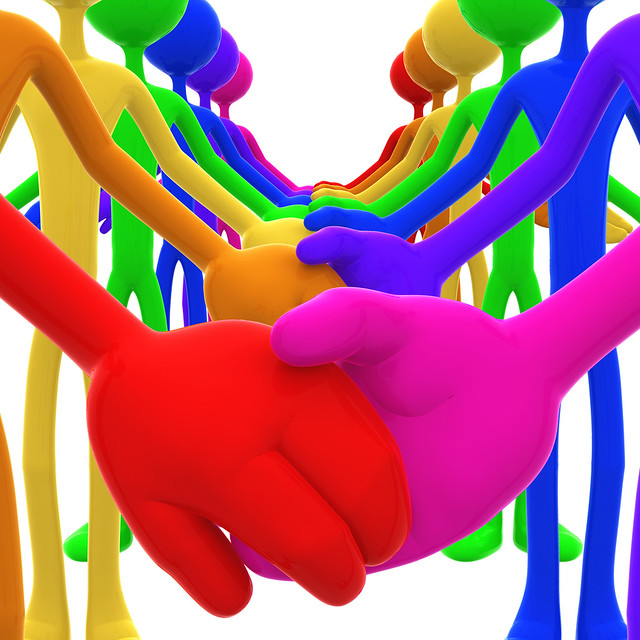 
Bigotry, prejudice and privilege saturate our society. Sometimes it’s big and flashy, screamed hatred and slurs, violence, blatant discrimination and exclusion. Sometimes it’s more subtle and insidious - endless micro-aggressions and assumptions that so often stigmatise, ‘other’, exclude and demean marginalised people every day. And all too often it’s inherently structural, our law, our culture, our entire society has been built on a foundation of prejudiced assumption that make merely navigating in daily life a trial.

It’s no surprise then, given this constant barrage, that when it comes to fiction some authors strive to create worlds where these prejudices do not exist. After all, if you’ve got a world where vampires, werewolves, witches et al actually exist, then why shouldn’t it also be a world where prejudice doesn’t?

This is a point we’ve made repeatedly before - a fictional world doesn’t HAVE to be a certain way. No author is forced to perpetuate the same bigoted tropes from the real world into a fictional setting. Regardless of what innumerable Game of Thrones fans think, it is not more realistic to have a setting with dragons or an economy where sex worker and soldier are the only professions than it is to have POC in Westeros or women who are not raped.

So your world doesn’t have to contain prejudice (but nor is containing prejudice inherently wrong) and this sounds like a wonderful way to avoid all kinds of pain for reader and author alike which is a definite plus. But all too often the implementation is lacking particularly since too many don’t stop to think about what an entirely prejudice free world looks like

Take the far future where mankind has either evolved past racism or have devolved to a level where racism is the least of their worries. What would a future without racial prejudice look like? Where every race is truly equal in opportunity (even if that opportunity is to be scabbling a subsistence living in the irradiated ruins of the future)?

Well, while it’s hard to track world population by race (because it’s a somewhat nebulous concept - though it is tracked by ethnicity), on a global scale it’s clear that White people are most certainly not the majority (Han Chinese people alone make up for 18% of the global population and the next two largest ethnicities are also non-white) and when we look at demographic changes, White people are going to become even less prevalent in the future, not more (as many frothing racist screaming in despair and horror).

In a future world without racism with true equal opportunity, POC would be present in numbers that reflects their actual populations. Yes, we can praise that the original series was actually very progressive for when it was first created back in the 60s - Star Trek was revolutionary for it’s time - but we are decades past a time when Star Trek could comfortably rest on those laurels; future incarnations have barely even tried to live up to that groundbreaking legacy.

We can see something similar with The 100 with its Ark drawn from several nations. In fact, The 100 Wikia helpfully lists them for us: Australia, Brazil, Canada, China, France, India, Japan, Russia, United Kingdom, United States, Uganda and Venezuela. These are the people of the Ark - and who was surprised to realise that these people were supposed to come from such diverse national origins?

This is another element that writers of prejudice-free world miss: cultural homogeneity. In a world where one race/nation/culture has not been elevated above the others we would expect diversity - of language, dress, food culture, art, history, attitude and so many of the myriad things that make different cultures different. Now that may be represented with a melange of cultures or several cultures co-existing - but it wouldn’t be the flat sameness that The 100 has. Even their names: Clarke, Finn, Bellamy, Octavia, Thelonius, Jasper, Monty, Marcus, Raven, John, Nathan, Abbie, Roan: just about everyone from the Arc has a Western name (and Anglicised versions of those names as well).

What happened, did the twelve Arcs come together and all the Anglophones promptly slaughter the others? If we wanted to create these 12 Arcs coming together couldn’t we have some sense of that beyond the odd scarred flag on a bulkhead? They couldn’t have had one character with a non-anglo name? An accent? Some indication of different origins?

This is not what a racism-free future looks like.

We see similar elements with LGBT people: in the orientation neutral future (as touted by the writers) of The 100 we have had some awesome depictions with Clarke. But that took to the very closing episodes of the second season.

This is not what an orientation-neutral world looks like. LGBT people in our world live with the closet which forces so many LGBT people to hide, to keep relationships (both present and historic) hidden or “subtle” to either pretend they don’t exist or for fear of backlash from a straight society that sees even the most neutral displays of affection as outrageously obscene. Contrary to what the usual suspects continually scream, LGBT people in our world are considerably less visible than they should be - far far far less visible than they should be.

In an “orientation-blind setting” we would not have the closet and we would have much more LGBT visibility - and it certainly wouldn’t take 2 seasons of really huge casts for two LGBT people to appear. Why does the world of The 100 still maintain a closet?

Ultimately, I think a lot of these broken prejudice-free worlds suffer from a major problem with, frankly, writer laziness. The writer isn’t creating this wonderful prejudice free world in order to create a wonderful escapist setting for marginalised people - they’re creating a prejudice free world because they don’t want to deal with prejudiced issues - and often also means they don’t want to deal with marginalised characters in any depth. They have their token minority there but have no real desire to have that minority character be a central part of the plot.

Danny from Teen Wolf, a gay teenager on a sports team in highschool has a very very high chance of facing homophobia (school, teenagers and sports are not exactly the most gay-accepting setting out there) - but this is fictionland so we can actually show gay teenagers that they too can be involved in sports without feeling hatred or ostracised… orrrr we can show gay teens they’re so irrelevant that they’re not even worth a storyline. The gay people of Teen Wolf don’t exist in an orientation-neutral world because of progressive inclusion - but because actually depicting prejudice would involve actual attention and storylines for these characters

This is is clear in so many of these depictions - they claim to be neutral - but then their worlds don’t reflect demographics and they’ll even clumsily break their setting. Again, looking at Teen Wolf, they avoid any homophobia storylines but then have gay jokes that REALLY on homophobia being present (such as Scott dancing with Danny at the prom to make the Coach back off so he didn’t look like a bigot: that makes absolutely no sense in an orientation-neutral setting). Again, this hasn’t been thought out or developed - it’s just an excuse used for lack of character development

Sometimes this “neutral” setting can reach ridiculous - like Resurrection having the Black agent Bellamy loudly demand if he “looked different” to a room full of White people and everyone avoiding the obvious. And this is a town which, we were told, was a border town during the Civil War…

This is one way where the very building blocks of our society that have been imported to the author’s world make absolutely no sense in a new context. Like in Laure Preble’s terribly homophobic Out where we have a society where everyone is supposed to be gay, same-sex marriage is legal and opposite sex relations are banned… yet married women are still called “mrs”. Why is there even a distinction between married and unmarried women (but not men) in a world where patriarchal marriage is alien?

In some ways a lot of writers don’t recognise just how much prejudice is built into the foundations of our society. People don’t realise that a prejudice-free world would not simply be ours without the slurs, but it would look radically different. Everything from assumed gender roles, to visibility, to cultural dominance and language - all of this would change in a world that didn’t have prejudice

And it’s toxic for it not to change. If you say “this society has no concept of prejudice” but STILL have POC and LGBT people be tiny tokens, still have all the leads by cishet, white, able bodied men, still have women as the token love interest etc then you are saying these issues are not due to PREJUDICE but to NATURAL SUPERIORITY

These are the messages of a prejudice free world that looks like ours - because we know what has forced the false, unjust hierarchies of our world, we know what has forced minorities into poverty, less opportunities and into hiding in our world, we know why certain people are elevated, honoured and empowered in our world. So why are exactly the same things happening in your world without those society-shaping prejudices?