Two Tales of the Iron Druid Chronicles by Kevin Hearne 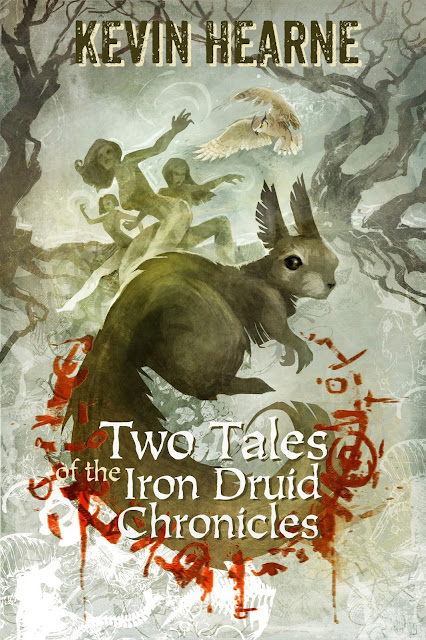 I really like these two short stories together, they’re both snippets into the lives of Atticus and Granuaile, certainly not necessary for the overall metaplot, they do add some nice insight
Yes, that’s exactly what I look for in short stories.
Their contrasting voices are absolutely excellent – and both unexpected but really work. Despite Atticus being two thousand years old, in many ways his voice is much less formal than Granuaile’s. But it doesn’t feel wrong – rather Atticus’s confidence and even his cockiness are part his apparent youth but also the confidence that comes with being that old, that knowledgeable, powerful within his parameters and very sure in what he does. He isn’t as overawed and bowled over as Granuaile is because he’s had millennia of doing this – and I think that shows in his voice. A young man with a lot of experience of being young
While Granuaile is a poet. And a poet who is still reeling from the amazing experience and sensation of being a new druid. He language is elaborate, awe inspired, completely overwhelmed by what is happening to her. I think her voice has been really well chosen to respect that.
Both stories also work really well in showing what a druid does and what a druid is. Atticus is doing his thing enjoying life when he, the experience druid, is summoned in to help an elemental in trouble. This is what a druid does and what their purposes. While Granuaile is facing on of the tests on her path to druidy – a test that points to what a druid should be, what values a druid should hold and what is important to a druid. Between them we get a lot of the essence of what a druid is.
I also liked that the second story was about Granuaile with the female goddesses – because the first story is about, again, evil witches. I’m glad that Atticus recognises that his animus towards witches is not entirely reasonable. Except, every single time we’ve seen a witch she has been evil. Even witches who are on Atticus’s side have definitely not been good people. And they’ve all been women. Evil female witches who need vanquishing have been a recurring theme of this series and some positive female power is definitely needed.
The story continues to be the same fun I’ve come to expect and love with this series – and lots of Oberon who is always an utter gem.
Diversitywise, as a short story it doesn’t have much focus beyond the two main characters – but I’m disinclined to let that be an excuse, as much as I love this series, because it really hasn’t had a good record when it comes to inclusion of minorities
While I feel I always have to reiterate my dislike of short stories in general, this is one of thosat actually gets it right and is a really nice addition to the Iron Druid Series in general – definitely worth adding to the whole saga.