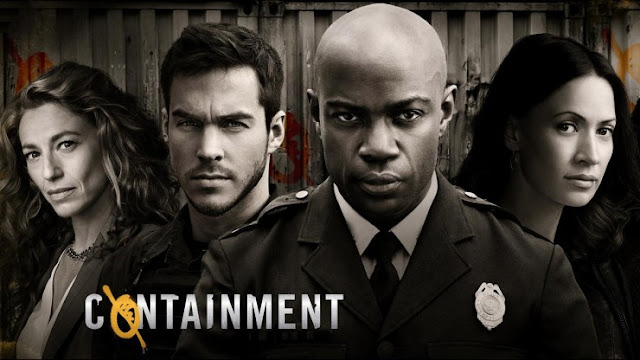 I’m trying really hard to be fair with this show. The problem is that “people trapped in a small area because reasons” is a concept we’ve seen a couple of times before. They did not leave me with good impressions so I kind of expected to hate this. Especially since I see more than a few parallels with Between.

However, the first episode leaves me… not put off entirely. But then, it is largely an introduction episode where we see the cast more than anything else, so it’s far too early to judge.

The show is in Atlanta where a new disease has broken out – which is quickly identified as being super super deadly. 100% mortality (albeit they declare that after a very very small sample size) and very very contagious. There’s lots of tension, lots of worry, lots of hostility and fear and worry and really well done. When the severity of the disease is realised, a quarantine, complete with electric fence, is raised around a neighbourhood of Atlanta with assurances it will only last 2 days. And then we see 13 days after with it still up, national guard firing guns, burning bodies and all kinds of awful.

The people are all divided on different sides of the containment fence and have various personal dramas going on as well.

Teresa is a pregnant teenager whose mother wants her to give up her baby and she wants to run off with her boyfriend Xander. She’s trapped in the zone, he’s outside of it; saved from charging an electric fence and being arrested by an “over-eager” cop (Xander is Black) by Alex (more on him later).

Kate is a single mother, a teacher and she and her son Quentin are visiting the hospital with her class (including Britney and her school driver father who was quarantined but is either immune or just had allergies) when the lock down dropped. Kate is making an early effort to leap on my shit list by running around the hospital without any regard for what any of the authorities were telling her, quarantine or even wearing her damn mask because her son ran off. Rather than grabbing one of said authorities and declaring her son has gone missing (he was with nice scientist fellow Bertie, inside the hospital. His disabled wife is outside).

From the medical side we have Dr. Cannert who has the suitably classy British accent, which one always needs when face devastating plague. It’s a rule. And we have Dr. Sabine Lommers who is big head medical honcho, laying down the law and trying to get everything in place. She has a mixed antagonistic/co-operative working relationship with Alex

Major Alex, policeman, good friend of Jake (who is now super pissed with him for sending him to the hospital before they knew the extent of the plague). He’s a good man, honest, man of the people (as we see with Xander). The fact that he’s the good one makes me somewhat wary of his potential hostility towards Sabine since it seems we may be playing the “sinister government agency” card a little early and unnecessarily.

His girlfriend – trapped in the quarantine – is Janna. They have a loving but rocky relationship because she has severe anxiety issues due to growing up in a group home (with her friend Suzy) and having severe trust and commitment issues. She loves Alex but has panic attacks every time she tries to move in with him – and now she’s trapped separately from him, just as she decided she was definitely going to move in and now she cannot.

There’s certainly a lot of potentially interesting conflict and characters here – I’m intrigued and surprisingly interested despite myself. There are several POC, but I won’t comment more than that simply because I’ve been burned by Pilot Diversity before – I will withhold judgement until we’re further into the series.

But we do have one troublesome element already: patient zero is Syrian. He smuggled himself into the country to avoid persecution and was apparently carrying a vial of toxic modified plague with him. Yes this plague was started by, apparently, Syrian terrorists masquerading as refugees. Did Trump write this concept? It’s toxic, grossly demonising and feeds directly into one of the most vicious attacks on an extremely vulnerable group who desperately need help. It encourages the ongoing cowardly attacks used to attack and refuse help to a group that is in incredible need.

And there’s so little need for it – there are so many ways this could have been done without this. It was beyond unnecessary and I can’t imagine how this show is going to redeem this or if it will even try.