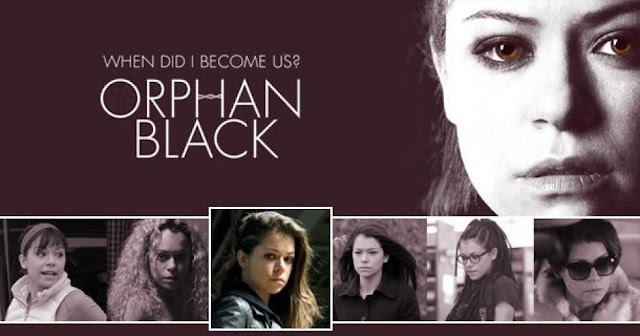 At the end of The Collapse of Nature, M.K had gotten in touch with Sarah through Art, to warn her that Neolution had discovered where she was and was on their way.  Sarah became frantic and Mrs. S tried to calm her but the reality of their precarious situation became obvious when Kiera noticed headlights coming their way. When we next see Sarah, Siobhan, Kiera and Kendall, they are getting out of truck outside of a comic shop where Cosima and Scott have set up a secret lab to work on Cosima's illness and find out more about their biology. Sarah doesn't miss a beat and is off to find Art to learn as much as she can about M.K., our new elusive clone.

Art tells Sarah all about the Capra case and the fact that once Beth stared something she never let it go.  They decide to look for clues at Beth's place.  Apparently, the rent had been paid for for the year so all of her things are still there and boxed up.  Art explains that the cops were told that the next of kin would take care of it but since Beth doesn't actually have next of kin, all of her stuff remains in her apartment.  In the bathroom, Sarah finds Beth's works and for first the time gets some sense of what Beth was going through.  What I want to know is why Sarah didn't discover the works when she was living there with Paul after assuming Beth's identity? When Art finds a camera, he assumes that it was Paul spying on Beth but Sarah corrects him and says that it was Beth spying on Paul.  They watch some of the video and notice that a pregnant Neolution woman visited Beth.  When Sarah finds the book that Leekie signed for Beth, she decides it's time to drop in on the Neolution Bar.

Though Felix has been avoiding her calls, Sarah decides to pay him a visit and walks right into his bathroom while he is having a shower. Damn, the man cannot even bathe in peace once Sarah decides that she has servant work for him to do. It's particularly irritating that while she tells him that they should have a drink because she misses his face, what she really wants is for Felix to come to her aid. Since she cannot get into the Neolution bar by herself, she expects Felix to enter and then help her sneak in the back door.  Sarah actually has the nerve to look shocked when Felix asks her for money to pay the cover charge to get into the bar.

In the bar, Felix reveals that he has started the search for his biological family and naturally Sarah is not pleased with this. Felix explains that Sarah is connected to everyone and is even related to Siobhan. Do you think that Sarah even invested two seconds of her time to discuss Felix's feelings? Why, of course not, she simply protested that Felix already has a family. Felix hits the dance floor with a guy. I can only hope that for the rest of the season, Felix takes a more assertive stance with the clones he is expected to serve at the drop of a hat.

At the bar, Sarah is mistakenly recognized as M.K. and pulled aside to see a video of man with something in his cheek.  When the item is messed with it explodes and kills its host. Sarah asks about the device, thus alerting the man that she is talking to that she is not in fact M.K. because M.K. is the one who alerted him to the device in the first place. Sarah is forced to run but she does manage to grab the man's phone before escaping.  Sarah uses the phone to discover where the man was planning on meeting M.K. Instead of going back for Felix, Sarah simply sends him a message.  I guess she's done with Felix now that he's served his purpose.

The meeting point is in a laundromat and typical of what has become M.K.'s style, she's not physically in the laundromat but is watching Sarah view CCTV. They chat briefly with Sarah thanking M.K for saving her. M.K. suggests that Sarah go into hiding so that she doesn't end up like Beth but Sarah is adamant that hiding doesn't work.  M.K. takes off when Sarah spots her sitting in a hooptie outside of the laundry.  Before Sarah can leave, the White male and the Black woman from last week enter, and this time they are posing as paramedics. They hold Sarah down, check her mouth and declare that she is not the clone they are looking for. After pulling something out of Sarah's cheek they are actually able to identify her.

Sarah rushes back to the hideout and is in a complete panic.  When Siobhan uses a flashlight to check inside Sarah's mouth, she sees a creature moving. Oh gross.

Onto the other clones.

Helena is actually pregnant with twins.  She has to pretend to be Allison to get healthcare and Donny poses as her husband.  Allison is clearly upset and jealous.  Allison comments to Donny that Helena is eating them out of house and home and is a murderer.  When Donny points out that they've killed people as well, Allison claims that they are different because they have committed manslaughter and not murder.  Yeah, I think Allison's splitting hairs on this one.  Allison is upset that her little craft room has been invaded by Helena, who is not as scrupulous about things being in their appropriate place as her.  Donny tries to pacify Allison by explaining that Helena just wants to be like her.


Cosima is still very ill and cannot try anymore treatment until she finishes off her current one to properly track the results.  Cosima smokes pot to at least trigger her to eat and is comforted by Siobhan.  Cosima is still very much grieving the loss of Delphine and is desperate to know if Delphine is alive because she misses her so much.  Unfortunately, Siobhan cannot give Cosima the news she seeks because Delphine is very much dead.

Scott is working on Kendall's blood work and she notices him looking back at her. Kendall decides to confront Scott, who has noticed that her white blood cell count is elevated. Kendall reveals that she has leukemia and makes Scott promise not to tell Siobhan or anyone else because she doesn't want pity. Kendall is determined that now that she has finally got her family back together again to enjoy every last minute.

Clearly, there's going to be a lot of back and forth this season.  Episode one was a flashback to give us Beth's backstory and now Orphan Black is bringing the connections together with Neolution. I really thought they were done with Neloution but it seems that not only are  they back full force, their disgusting bug like implants are going to be a major problem for the clones. Also ewww.

I really hope that this season we see less of Felix in the role of the servant.  I know that Felix is an artist but was it really necessary for him to be naked when Allison popped by for a visit to inform him that his family is back in town?  Allison just showed up even though she had called several times and he didn't answer.  Sarah did the same thing and even invaded his bathroom while he was showering. He actually had to ask her to pass him a towel. Not only has Orphan Black kept Felix in a servant role, now he cannot even go to the bathroom in peace.  I am not holding out hope for his rebellion and assertion that he is going to find his birth family because the last time Felix stood up to Sarah about wanting some me time, he ended up going to see Allison perform in a local play.  Felix has always been a trope and I am so desperate for him to move beyond that.

I love pregnant Helena and wonder what kind of mother she is going to make?  It seems that they are going to team up Helena with Allison and Donny this season.  It's going to be awkward but absolutely hilarious if this episode is anything to go by.  I will however miss seeing Helena in the thick of things kicking ass.