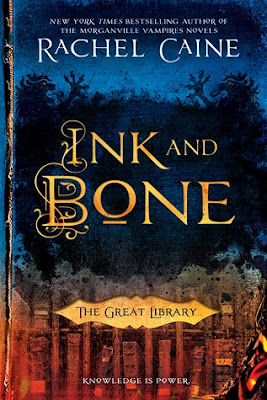 The Great Library of Alexandria was never burnt and, more, has spread across the entire world. Part religion, part supreme national body, its power is unquestioned.

Jess Brightwell is a book smuggler, from a family of book smugglers. His entrance into the Library as a scholar was initially planned to be a way for his family to get access to more and precious books

But while going through the vigorous training procedure to join the Library, his already complicated loyalty becomes stressed. Something which doesn’t get simpler as he learns some of the Library’s many secrets – and the length which the Library will go to protect those secrets and its global control.

Well that was a surprise – I didn’t expect something nearly as unique and original as this.

The whole idea of the Great Library surviving, of it becoming a major international force, charged with the maintenance, protection and furthering of knowledge is really well done. This creates a whole different world – not just politically with the Great library being like a world religion with its own laws, army and rules – but with a different world map all based on how the Great Library has radically changed society. And it’s not just the map, it’s also how people think. The library has an almost religious significance, recording your personal thoughts in your journal to be kept in the library after your death has become both a funerary rite and an incredibly important ritual to people – to the extent that even armies at war will keep emergency reserve journals for people to fill in. The whole idea of reading one of those journals has become almost a sacrilege

Actual books have become incredible precious objects of such value because of the power of the library and the purpose knowledge has. A whole black market as built around it – precious actual books and what they represent compared the alchemical copies that the library produces – temporary copies that anyone can read, beamed to specially prepared blank books.

Not only does this fascinating world setting serve as an excellent backdrop, but through it we also see the excellent depiction of how this well meaning organisation can be corrupted. How the promotion of knowledge – even pushing forward thinking ideas for the time like educating women. Because the library was about learning, preserving and spreading knowledge. And how easily the “spread” of knowledge becomes the “control” of knowledge – again, the good intentions are really clear there: The idea that knowledge has to stay in Library control – because if information is spread willy-nilly, well, who can be sure if it’s true or right? Or maybe dangerous? Maybe its lies? Maybe is should be kept secret? Maybe it’s dangerous?

And can’t we all see that? Have any of us not being frustrated by something like a ridiculous anti-vaxxer story or some other nonsense without thinking that someone really should stop the spreading of bullshit so liberally? And we all know the increasingly fraught debate between freedom of information vs privacy (to say nothing of National security).


When control of knowledge becomes the goal then owning a book is a crime – and smuggling books becomes lucrative. Actually inventing a way to CREATE books, quickly, easily, cheaply and without the Library’s editorial power, becomes heretical.

I just love the path of this. It’s easy to create a big, bad organisation full of big bad people who do big bad things. But the depth of creating a history, of creating

And I do. How can any reader not? The Great Library still around and world wide? Literature and knowledge esteemed above all else? Books being treated as precious commodities? Can any reader NOT want to be on the side of the Library and feel the tragedy of it being so perverted from its purpose? I can’t stress enough how really well done this is.

Across this world we have an excellent cast of characters that do a lot to emphasising the world building – led by our protagonist Jess, from a family of book smugglers (who he doesn’t really like much… but, y’know, family. It’s one of those really well depicted conflicted and complicated emotions I really like) enters Library training with expectations from his family and the utterly ruthless and extreme demands of the extremely competitive training: a training which introduces him to a lot of people that completely rock his world view (in an excellent way: dispelling ideas of things like how awesome he is in classic big fish now moved into a much bigger pond) and to constantly question his relationships with the people around him, what he wants and what his goals are. To such an extent that even by the end of the book I’m not sure where Jess will go here and, more, I’m not sure where he should go or where I would go in his place.

Those relationships are complicated – there’s his grudging respect and rivalry with Dario, there’s the surprise of some and the the secrets and relationships with Morgan, the gentle friendship of Thomas. There’s the brilliance of Khalila (the most intelligent and skilled of the students), an Arabic Muslim woman wearing a hijab who is brilliant, willing to be a leader and a good friend. She’s free from stereotype while not making her being a Muslim as a once mentioned footnote. Another student, Izumi, is Japanese. Their teacher, Scholar Wolfe, is also a POC. The Great Library is based in, of course, Alexandria with a large, racially diverse population. I like that a lot because so many of international series which are supposed to be globe trotting or have organisations which are international end up having an all White cast, or only a couple of tokens. Of course, the most prominent of these characters are White, so it hasn’t come close to entirely dodging the issue, but we do have at least moderately prominent POC who are more than extras.

Scholar Wolfe – who is definitely revealed to be much more complicated and involved than just being their ruthless taskmaster, is also in a relationship with Santi, a male guard (and you can’t assume the gender of the guard – or any Library officials, since there’s a well represented gender nationality and race parity among the Library staff and representatives) who are a clear, loving couple. All told, it’s a lot more diverse than the vast majority of books I’ve read even if the protagonist is a straight white man and his closest confidents (Morgan and Thomas) are the same.

To finish all this we have a complex, multi-branched plot that brings all these excellent characters, excellent concepts and excellent world building together. It’s a bit slow to begin with before Jess makes it to the library but once he arrives, the different factions, the difficulty of no-one being, well, right and the many conflicts and conspiracies all combine to be an absolutely excellent read