Penny Dreadful, Season 3, Episode 5: This World is Our Hell 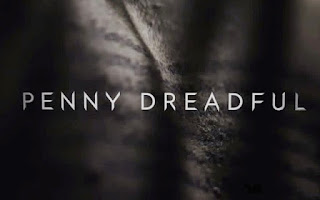 While last week’s episode was the awesome story of the awesome Vanessa who is awesome, this week’s story is of Ethan’s which is… fraught. We have Ethan and Hecate, low on water with dying horses (hey Hecate likes horses, total redemption guys!) who totally hates mankind and god and would really really like Ethan to join her in dark awesome evilness. Kaetenay and Malcolm – with Kaetenay happily willing to cut a swathe through everything to get to Ethan. And we have Marshal Franklin, his men and Rust who politely reveals some back story to let us all know he is an implacable force of endless tenacity that cannot be slowed or stopped and who you really really really don’t want to fuck with.

Thanks to various people we do learn Ethan’s backstory (partly while sharing terrible parent stories with Hecate. Hecate’s “I was given to satan as a 5 year old” totally wins, for the record). Ethan was sent to the army by his dad and his commander then ordered him to slaughter innocent Apache. Which he did – then killed his evil commander and reported to the Apache – Kaetenay in particular – to turn himself over to be executed for his crimes

Kaetenay decided far more usefully to make Ethan fight against the United states to protect the Apache. Which meant facing overwhelming numbers and, in Kaetenay’s words, resorting to greater and geater evil

Which… ugh. Look, we’ve said before that drawing on real life horrors like the genocide of Native Americans is something to be handled with great care and caution and respect, if at all. Further to this, even while this depiction doesn’t shrink away from the brutal genocide of the Native Americans, there’s then a whiff of blame for what Ethan become (and Kaetenay feeling a level of guilt and obligation towards him). And… really taking the massacre of Native Americans and making it a werewolf origin story is everything we spoke against.

Ethan and Hecate also talk morality with her all for evilness – and pointing out he’s kind of being led into this eternal guilt by the orders of others. He says his guilt is the best thing about him while she points out god won’t forgive him and if he ever wants to be free from guilt he needs to embrace his sins, praise satan.

Y’know this would be great advice if we were talking about shaming of innocent acts by an oppressive church and awful advice when it comes to “hey murder and massacres are totally ok!”.

As Ethan talks to Hecate he also fills her in on some Apache creation myth. Honestly, I know virtually nothing about Apache creation myths so I can’t begin to comment on the accuracy of this. What I will point out is that Ethan and Hecate, while talking about the darkness being defeated by a warrior, they decide to centre Ethan: will Ethan be a monstrous creature of said darkness or will he be the warrior who fights it. Either way, we’re taking an apparent Native American legend and making it all about a White guy.

Which is a problem because Ethan seems to have been listening to Hecate’s recipe for not feeling guilty any more – he’s going to go evil. And when she asks if he can borrow his blood she can summon some demons, he’s totally on side.

Sadly, while she would look quite evil with her sand box demon summing, on this show she looks kind of like a cut price Vanessa. That’s not a criticism of her, no-one babbles evil nonsense quite like Vanessa does.

She summons lots of snakes which attack Rusk, the Marshall and his minion. And one of them bites Kaetenay who is their slicing throats as well. Snakes? These are your demons? Pfft, Vanessa would eat you for breakfast

Rusk survives because, as I mentioned, he is a terrifying force of nature. Him and the Marshall are now dedicated to not just catching Ethan, but killing him.

Killing the people following him doesn’t solve the fact they have no water – and both Ethan and Hecate collapse before they’re found by Malcolm (and a half-dead Kaetenay) and then by Ethan’s dad’s men. Which is good timing because it stops Malcolm from shooting Hecate and then Ethan having to shoot Malcolm which would have been messy

At chez daddy Talbott, we find that Talbott is very much a clone of Malcolm - Malcolm denies it – but really between him being a racist arsehole who hates Native Americans to being proud of naming a mountain after himself, he’s Malcolm #2, the less classy American version. Malcolm denies it even while handing over his own life lessons because they apply because they are the same person

So why did daddy Talbott want to drag Ethan back? He wants Ethan to repent. See, when he was first taken by Kaetenay to fight for the Apache, Ethan told Kaetenay where a large stash of ammunition and weapons were. That was his dad’s ranch. And the Apache used all the detailed information he gave to take down the guards, kill Ethan’s family including his older brother, his mother and torture and kill his little sister.

Daddy Talbott knows he’s going to hell but wants to save his son from the same fate. So wants him to fall to his knees and beg god for forgiveness. Or be shot

But, thanks to Hecate’s conversion efforts (oh they had sex. Did I mention that?) Ethan is officially done with feeling guilty or asking forgiveness. And he’s quite happy to go to hell.

Let’s hope everyone kills everyone else.

The sad thing is, if we removed the whole Native American appropriation and were a bit less murdery about the sins Ethan has to embrace then we could make some excellent points about being shackled by guilt, rising above it and even embracing yourself

Actually, let’s remove this train wreck of a storyline, Ethan and Malcolm and zap this entire lesson and character development on Vanessa instead.

Oh, B plot – Victor Frankenstein is still messing with Henry Jerkyll’s formula. It also continues as before with Victor being super duper creepy about Lily. I’m also really not loving how Victor and Henry’s relationship is developing. Originally it looked good, they worked well together – but Victor is becoming increasingly condescending to Henry and his skills, sure he can do a much better job of Henry’s own invention. Henry is also getting justifiably pissed off with Victor apparently viewing them as “fellow outcasts” while completely ignoring/downplaying the racism that Henry faces. I dearly hope the appearance of Hyde will reign this in.