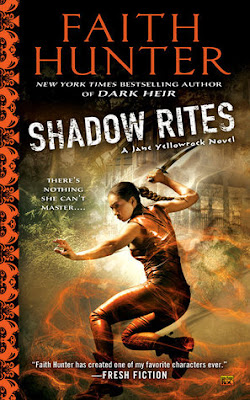 Jane is planning the complicated security measures to prepare for the visit of the European Vampires. She also has to prepare for a fraught and controversial summit between the vampires and witches to end centuries of feuding

Which is not a good time for her shapeshifting ability to start acting up – made even more pressing with the plotting of some powerful and extremely cunning witches with an apparent lethal agenda.

Jane seems to be heading to a new chapter in this book with bringing more people into her little family. I’m not entirely sure how I feel about it yet – I like her and Eli and Alex. They have an excellent rapport. They are a family. While the addition of vampire Edmund (and all his unanswered questions) and entourage has the potential to be amusing I just don’t get why he’s there? Healing mojo? Extra unnecessary debate? Somewhat broken character development about Jane (and is it really character development to not want lots of people you barely know moving in with you?)

Jane and Bruiser is a relationship which is certainly better than relationships Jane has had before. And I definitely appreciate that Jane isn’t falling into a relationship with Leo because that would be a whole terrible mess of abusive tropes

Bruiser is often “protective” of Jane, using the excuse of being old fashioned. Compared to many books it’s mild though and he never tries to overrule her, make decisions for her or otherwise disrespect her. Really, if it wasn’t framed as old fashioned protectiveness it could have been much easier passed off with him being legitimately pissed

It’s just the name, Bruiser. It’s like the worst possible nickname for this character

I don’t hate her relationship with Bruiser – but I love her relationships with others: the family she’s built with Eli and Alex (and, yes, I love that this has never been romantic and never will be), the healing relationship with Molly and trying to balance being protective without infantilising those around her. Caring for people without seeing that as a burden or a duty is a nice addition to her story.

This book does have some considerable diversity

Jane Yellowrock is Native American, Cherokee – and unlike so many Native American protagonists, a lot of work has gone into her history, language, culture and connections. In so many books Jane would be Native American and the whole point of that heritage would be to make her a Skinwalker. And that would be it. There would be nothing else about her: Jane’s history seems much more fleshed out. Her culture and ethnicity are important elements of her character not just a random excuses for giving her magical power. That history still has a powerful effect on her.

Not only that, the way the books treat history, especially with Jane’s extreme longevity, is also surprising (and, yes, that’s depressing that it’s surprising – but a whole lot of Urban Fantasy, especially Urban Fantasy in the southern US do tend to romanticise at best) and stark. The genocide of Native Americans, slavery and its ongoing ramifications are both referenced to in the book.

Her adopted family and two of the closest people to her are Eli and Alex, two Black men – and Black men from very different backgrounds. Most of Leo’s enforcement team led by Derek, his new enforcer, are Black: all soldiers. Eli also has a background as a soldier, but Alex is a hacker, a computer expert and extremely good at what he does. Witches both among the bad guys and the head of the witches of New Orleans are Black women (this is the benefit of having multiple minorities – because you can show an array of characters avoiding a stereotyped presentation by simple breadth). An important character in this book is Ming Zoya, an Asian woman, who I hope will also be more important in future books since Leo has embraced her into his inner circle (along with her sister Ming Zhane).

I also like that, with Molly there, and the preponderance of female witches, despite largely being surrounded by men, Jane has powerful friendships with women. She also respects women – even if she is afraid of Katie; even casual mentions of characters like Bettina (a witch and sex worker) are lacking in snark and spite we so often see.

There are a number of bisexual characters in this book…  in that we seem to be far more solidly declaring that all vampires are pretty much bisexual. On the plus side this means we now have a very large number of bisexual characters. The problem is that, firstly, this is the tenth book – it has taken a long long long time to confirm a whole lot of these characters as bisexual. Secondly, straight relationships are most certainly more prominent. Thirdly, making bisexuality a part of vampirism, especially through Jane’s eyes, seems to be far less “here are bisexual characters” and more “vampires will eat and shag anyone”; in fact, she links this bisexuality expressly to Leo’s meals. And she’s judgemental about it – in fact every time she enters vampire abode she mentions how much it smells of all that dirty dirty sex, ewwww.

Remember this is the woman who is pretty regularly having sex with Bruiser every chance she can while Eli tells her to get a room.

I appreciate the large number of bisexual characters, but the way it’s done is not excellent.

There’s a lot going on in this book. Part of this is the inevitable with any series that reaches 10 books, like this one, and that’s 10 books with a very large world, a huge number of characters and supernatural creatures and a whole lot of political twists. That’s a lot to carry and it can be difficult to catch up if it has been a while since the last book. All the things that have passed before but are still referenced – Bethany, Katie’s healing, the Aranciel, Ricky the werecajun, Jane’s teams, the Onoroi Gee the Mercy Blade: these are all relevant parts of this story, all of which are referenced and while I do remember all of them because they were all excellent stories (except for Rick. I never liked Rick), it does require you to take careful attention and to ensure your memory is still ticking away.

But part of it is there simply is a lot going on. The arrival of the European vampires continues to rumble on in the background to a degree where I can’t even remember why this is a scary thing. There’s Jane’s magic acting up possibly due to lightening, possibly due to angels (both of these are from past plots), there’s magical shenanigans happening at Jane’s house and various other locations. It is all related, but it does feel like a whole lot is going on and, because of that, it often feels like things are being neglected (like it feels like a long time before Jane addressed her shapeshifting issue).

On top of that, the writing can be just confusing at all. The magic here is so complex and involves so much very detailed and fascinating description that sometimes between the grey between and various colours and wards doing this and other wards doing that, and loop holes… yes, it can be hard to keep track. Yet, at the same time, I do appreciate the detail that goes into this. But it can definitely bog down an action sequence if you’re not paying a lot of very careful attention.

Yes, this is kind of weird because I feel like I’m arguing against all the elements of this book I love. I love it’s deeply involve world building. I love the long history that has built up over many books. I love that events that have happened in a past book aren’t now over. I love the numerous supernatural elements, the different kinds of magic and how the world building is developing with more and more revelations. I love how long and interwoven this whole storyline is – I mean, Mearkanis? That’s a plot line from waaaay back in the series.

I think I love all this complexity – it makes it difficult to read at times, but it is worth the effort.