A Fierce and Subtle Poison by Samantha Mabry 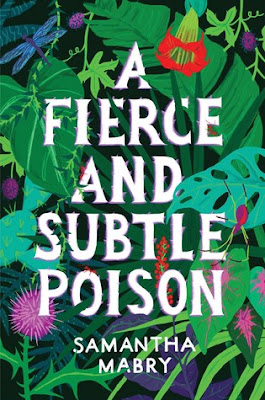 Lucas lives at least some of the time on the island of Puerto Rico, living in the wealthy powerful shadow of his property developer father. A father who is know to many islanders as “The Conquistador” for his business practices.

All his life on the island, he has heard legends of the cursed house and the cursed woman with in – but when he finally meets Isabel he learns her story is more complicated and more tragic than any of the stories he heard as a child.

In some ways, that it’s not exactly our genre per se. Sure there is something utterly unexplained about Isabel and her peculiar curse/biology is definitely unexplained and is hinted at being supernatural (and I doubt if there’s any physical way someone could be that instantly deadly) with its hinted/possibly backstory. But ultimately she could have had her skin replaced by cyanide, or electrified… the actuality of it doesn’t really matter. The story would not be appreciably changed if there was no actual potential supernatural reason and Isabel was simply ill with an actual disease – a potentially contagious one that is both killing her and isolating her. It wouldn’t appreciably change the story and really means that any speculative fiction elements to this book are pretty superfluous. Honestly that’s kind of off putting to me – it’s slightly vexing for the element I most look for in a book to be pretty much an off shoot.

I’m not saying that this makes it a bad book. Far from it – it’s an interesting conflict as Isabel seeks connection, fears for her life, is faced with some very terrible and difficult choices which are quite literally involve accepting clearly excusable evil or her own martyrdom. Though in some ways this does make me wish we followed her more than Lucas since she seems to have the more involved and important storyline. Especially since we also centre him and his grief with the disappearance of a girl he barely knew rather than her own family.

I’m also slightly bemused by the blurb – all about the cursed girl Isabel. Except for most of the book Isabel isn’t only not present in any real way, but she and her cursed house are just kind of footnotes . To say this book is about Isabel is almost like saying To Kill a Mockingbird is about Boo Radley. Ok, Isabel becomes much much much more involved in the book in the last third – but this isn’t her story. It’s how her life affects Lucas and Lucas’s story. And even then it’s not all that big an affect. The blurb bigs up an implied supernatural element that isn’t really there

It’s also nice that there’s some inclusion of and development of Taino legends and Puerto Rican culture and legends. I love the mix and exploration, the food, language and clearly different sides of the island. In fact there’s a lot of examination of Lucas and his clumsy navigation of him being in Puerto Rico. We see a lot of excellent challenge of Lucas‘s father’s contempt for the island its culture and its history, seeing only a resource to plunder for money. His whole depiction is an excellent take on White and Class privilege in a majority POC island. And even while Lucasis clearly aware of this and openly angry and at odds with his dad, his development (and his apt nickname of “conquistador”) also shows that he himself also benefits from white privilege. This is important – because his awareness of his privilege and that he’s spoiled and has considerable advantages doesn’t mean it’s no longer relevant nor does it mean he won’t still make mis-steps. It’s an excellent portrayal

There are no LGBT characters. And we do have a lot of female death even if Isabel’s storyline is definitely the most important and meaningful in the book.

This exploration of Lucas and his life on the island takes up much of the book and it is definitely good, especially as he begins to learn something of Isabel and we get a sense of her curse. I will say while it’s well written and nuanced and often insightful, it’s also rather flabbily paced. It’s slow, it waffles and, honestly, we spend a whole lot of time focused on Lucas which, while come with some insight, also doesn’t come with a whole lot of interest for me.