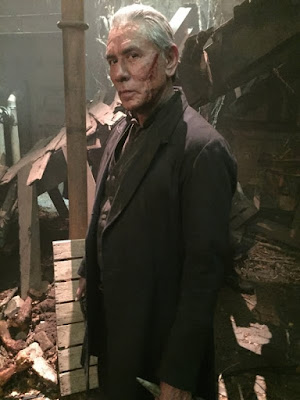 Penny Dreadful is easily the most visually beautiful show that we are watching currently. It’s easy to get caught up in the gothic aspects and brilliant acting and ignore the many problematic elements which have come to fore from almost the beginning.  The Victorian Era was rife with thoughts of empire, colonisation and racism and yet Penny Dreadful is being aired in 2016 - a time far removed from what it’s attempting to portray.  Simply saying that this was the way the Victorian Era was does not give one carte blanche to continue the racist portrayal without any sort of nuance.  Race on Penny Dreadful is portrayed in the most hackneyed fashion without any thought or care about the message being sent.


In Season three of Penny Dreadful we have really reached a pinnacle of terrible tropes - perhaps most glaringly with the introduction of Kaetenay;  an Apache character.  As we know, during this time in history, the United States was busy slaughtering and placing its indigenous peoples on reservations in what would centuries later be understood to be an act of near genocide.   One by one tribes fought back against the white invaders only to ultimately be overwhelmed.  Penny Dreadful takes the time to talk about an incident in which Ethan along with his unit slaughtered an unsuspecting village including women and children.  We’ve known for some time that Ethan, like most characters on Penny Dreadful, is tortured but to discover that this comes from the guilt of a mass murder should make Ethan a less sympathetic character - but never underestimate the power of White Manpain.  How can this man be the shining knight who comes to Vanessa’s rescue, pure of heart and intention?


Penny Dreadful deals with the horror of Ethan’s actions by having Kaetenay claim him as son and by so doing washes away the evil of what Ethan participated in.  It absolutely sanitises Ethan’s actions as simply a thing he did in his past without meaning.  I often wonder how it is that Wes Studi can stomach to say the lines that Penny Dreadful assigns him because essentially, Penny Dreadful has Kaetenay not only take ownership of Ethan but elevates him into the saviour of the world (and totally and Apache, honest).  Ethan is the walking embodiment of the White Man’s burden and it’s being celebrated as though the slaughtering of the Apache is simply a stepping stone to greatness, thus justifying the crushing oppression of the Victorian Era upon Indigenous peoples. There’s no doubt that the colonisation of the Apache is a historical fact and needed to be addressed once the show crossed the Atlantic; however, at no time does this justify Penny Dreadful’s treatment of it.


This attempt to sanitise history through Ethan’s eyes is followed by the way he refers to Kaetenay and Ethan - and even the amount of time we spend describing the Apache attack on Ethan’s family (a very personalised and brutal description compared to the distant, impersonal report of Ethan’s massacre of the Apache). The context of who is the aggressor and who is fighting to survive is brushed quickly over in the recitation, with Ethan seeming to view his father and Kaetenay as almost equally culpable.


The problem with the portrayal of Katenay doesn’t stop with him embracing Ethan, it is further problematised by the fact that Katenay quickly falls into the role of wise person of colour advising both Ethan and Sir Malcolm. He’s constantly imparting wisdom to the white male conquerors based of course in his magical woo woo.  It’s Katenay who uses woo woo to travel to see Vanessa and it’s Katenay who reports that Vanessa is almost completely lost to Dracula. It’s Katenay who knows that the fight is about so much more than Vanessa’s soul but about the fate of humanity and Katenay who conceives of a path forward.  If that were not enough, he uses the bones of his ancestors to accomplish this.  Even in death, the Indigenous people in Penny Dreadful’s world are sentenced to serve.  Penny Dreadful went from the nearly blank portrayal of Sembene to fully drawn caricature in Katenay without missing a beat.


The POC sidekick is a tired one, the POC mystical sidekick providing that special, melanin-enhanced, uncivilised magical help to the oh-so-modern White man is just an extra nauseating twist


We also have the immensely frustrating character of Dr. Henry Jekyll. I just don’t understand why they even bothered with this character?


Because the concept is excellent - the concept involves quite a lot of thought and hints at an actual willingness to challenge the Imperialism and racism of the era. Through Henry we could have challenged the British Raj and taken a far less wooly look at the British Empire compared to the gentle blinkered look which is so common in Victoriana in general and perpetuated by Sir Malcolm the explorer. A man whose adventures are only tragic and horrific because of the consequences to his poor neglected family and not the bodies the imperialism left in its wake.


Not the discarded women the adventurous men left behind or the slaughtered and enslaved people. Just think of the potential we could have had with Henry, son of a woman exploited and discarded by a vastly more powerful man, if he had looked upon Lily and her kidnapping through a different lens than his service to Victor? If Henry’s back story were considered anything more than a footnote, this would have been relevant.


This would have been especially powerful since season 3 made a pretty awful attempt to walk back Malcolm’s - and Britain’s - imperialism. Having Malcolm wander around Africa, (full of bleakness and savagery and violent thieves) lamenting how terrible foreign Imperialism is - (carefully not mentioning British imperialism though, like any country carved out a bigger piece of Africa?)


This is what Henry could have done, helping to provide some counter narrative to Malcolm’s imperial lens - a neglected and dismissed son of a rich man, regarded with contempt by both his white family and the society that benefits so much from the wealth and exploitation of the Empire while looking at their “subjects” with such contempt. Henry could have been the voice for that. Henry could have challenged and exposed all these imperialist narratives.


And having him being the Jekyll to Hyde? We could have a whole narrative of rage and fury, a whole metaphor of having to keep a “polite” face in public while the rage and fury seethes beneath. We could have had a supernatural rage forged in oppression  with all kinds of complication over just whether Hyde is even wrong or not...


So much potential. So much that could have been achieved. And what do we get? Nothing. Not one damn thing. Again, why even bother with this character? He has lurked in Victor Frankenstein’s shadow the entire series, providing help and service to the heartbroken kidnapper, providing resources and support without actually doing anything as a character in his own right. When one adds in Victor deciding he can “perfect” Henry’s invention, it just rubs salt into the wound - because of course the White man does it better!
Why create this character when you could replace him with “orderly #4” and not change the actual plot line of the season one tiny iota? Why create such an excellent, potentially insightful character and then throw all of this potential out?


What is Henry but another version of Sembene? I actually want to write an epic long rant about the treatment of Sembene but I can’t - because he wasn’t present enough to write a long rant about! He existed to serve, his entire point was service. His past was “mysterious” so there was no need to develop him. He called Ethan “friend” for no damn reason because the show couldn’t be bothered to develop any actual relationship so just decided to tell us it existed. He served, he was a caricature of service and, ultimately, he died because he was disposable, because he was little more than furnishing and it was a useful narrative tool to have Malcolm go on his wandering and leave Vanessa at home to be isolated. Even in death, he was useful which is all he ever was.


It wouldn’t surprise me if Henry also died in the last episode - he’s already so heavily following in Sembene’s wake and the show already seems to have little inclination towards actually developing him.


Like so many shows, films and books set in the past, a skewed view of history is being used as an excuse to erase: an erasure that is not only not justified by history, but is directly opposite to what was actually true. But whether for prejudice or erasure or tokenism, historic settings are far too often an excuse that is bought by audiences and fandoms, an excuse that is trotted out to justify the unacceptable time and time again. We need to stop swallowing this, we need to remove the white lens through which we see history, deny the narrative that has POC only exist as battered, servile shadows in the wake of the striding white lead. The long erased history of POC, of their stories and their personhood, deserves better than to be reduced to footnotes, servants and sacrifices in the white story of the past.