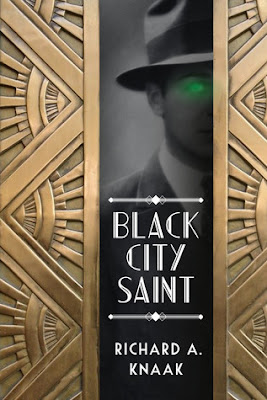 Nick Medea is the Guardian of the Gate. It is his duty to protect the gateway to faerie, and has been ever since he slew the dragon.

He fights against fae incursions in prohibition era Chicago – but something far more powerful and sinister than mob bosses is manipulating the warring gangs. Not all old enemies are defeated – and he risks losing the woman he loves, again, and his soul to the very beast he once destroyed in his battle to protect the city – and the world.

The concept of this book is… pretty amazing

St. George, the dragon slayer, is possessed by the very dragon he slew. And haunted by Diocletin, the Roman Emperor who ordered him (hey that’s some cannon research there!) executed for not turning his back on his Christianity. And fighting to protect the gateway

All of this is against a backdrop of 1920s mob-torn film noir Chicago.

And the King of the Fairies is manipulating the mobs. Who is pretty much at war against the Queen of the Fairies – who also can’t be trusted. Both of whole are epicly creepy and powerful

You’re still reading this review? How can you not read that concept and not make grabby hands for the book right away? I know I did!

Shall I throw in faerie exiles including a werewolf trying out Chicagoan 20s slang?

I also really do like the plot – I love that these ancient, mighty, incredible fae lords who are 10,000 steps ahead of you at all times. I love the complexity of their plan. I love the craftiness of it.

I love Nick’s constant battle and worry about the beast inside him.

I love the concept of the very very creepy fae that inhabit this world. I love how they’re presented and Nick’s duty related to them – I even love lord of the fae’s end game and what it implies for the whole world. I love its twists.

The main problem I have with this book’s writing is it’s well over 300 pages long and it could be very easily cut down to about 200 and not have changed the story over much. There’s a big waffle in the middle of the book where not much seems to be happening. Oberon hangs around and taunts them a bit but they don’t seem to actually do much or advance the story. It’s just a bit waffly.

In terms of women we have Claryce. And I like her – she’s skilled, she’s powerful, she’s determined not to be mushroomed and curious and intelligent and insightful. Which is all excellent. And it would have all still being excellent if she weren’t a reincarnation of Nick’s previous love interest who is apparently doomed to die. This was so unnecessary. We didn’t need this plot line to justify her involvement. We didn’t need the sexual tension. We didn’t need the doomed future to justify Nick trying to keep her in the dark and constantly send her away. She was an awesome character – she didn’t need this.

We had Detective Cortez, the latino detective who is astute and capable and intelligent and very overlooked by his fellows. In some ways he’s an excellent portrayal of how excellent people faced racism and, as such, their utter potential was wasted and they could have done a lot more and that the people who didn’t appreciate him are literally hurting themselves in doing so. It was well portrayed in about a third of the scenes he appeared in. Then well portrayed in the other third. Then well portrayed again in the last third. Every single time Cortez appeared we would have a comment about the racism he faced, usually several. All. The. Time. I’m not saying they aren’t great points to make but if his every moment of existence is to comment on racism then you do need to step back and add some more character elements.

Also, again, Chicago is pretty diverse city and barring the odd character we had very few POC. And no LGBTQ people.

On the whole, I was impressed by this book. The originality, the characters, the concept I never even dreamed of, the imagination, the cunning, the plot. But it is badly let down by its writing. It’s still an amazing book – but with a few careful edits it could have been epic

But even with the waffle, it’s worth 4 fangs