The Lives of Tao (Tao Series #1) by Wesley Chu 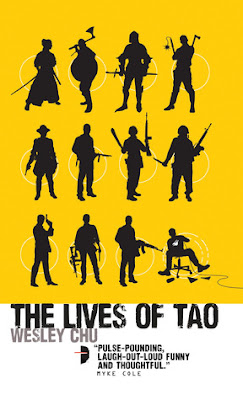 That’s my excuse. But I’ll be honest I just wanted to read this series as it was well recommended and I already liked Wesley Chu’s Time Salvager and since it’s generally frowned upon to hunt down authors that intrigue you and demand they write the genre you like on pain of am armadilloing, I decided to read this one. And save my armadillos for another day (also spellcheck, I disapprove of that lack of “e” on armadillos but after 10 minutes of struggle, I lost).

This book has aliens, the Quasing find human hosts which they then influence – but don’t take over. They have no super powers, they give no super powers – they just give knowledge. Thousands and thousand of years of experience – the experience of all human civilisation. Civilisation for which they were behind a lot of it, with a huge amount of the most famous and influential people of history were possessed by quasing.

In many other books I would comment on how this is appropriative and how it dismisses real human history. Especially since it does a very good job of not just focusing western history (so much of our fiction is western orientated): Tao, the Quasing we follow, has most prominently been in the head of Ghenghis Khan and Sun Yat-Sen among others. So this would suggest putting he achievements of great people in history – great POC in history – down to alien intervention (which is borderline “aliens built the pyramids” level of problematic)

It manages to avoid that by the simple amount of influence Tao has. Sure he can guide, but he can’t control. He can enhance but ultimately the quasing is not in the driver’s seat. On top of that Tao is as much – or more, willing to claim his failures as much as his successes. He not just blames himself for the failures of his past hosts but also Quasings in general. I found the brief reminisces of Tao’s previous lives, how Quasing history has developed, how world history has developed and how Prophus and Geijix factions came about. But thin it was excellently balanced by not including too much – we introduced the history and goals of the factions without completely overwhelming the whole book or turning it into an info-dump.

Still I did prefer the reminiscences to the story of Roen – partly because I don’t particularly like how Roen was treated. He has a lot of character flaws and, no, he wasn’t especially physically adept: but Tao insisted he become an agent, as in secret agent. They even said that the Prophus have need for scientists etc – academics – so why not look for a role more suitable to Roen’s skill set. I felt this made the human host, in contrast to the backstory, somewhat irrelevant. Tao’s specialities counted and the host will be forced into that mould (even if it comes with a bit of fat shaming).

Still, beyond that original problem, I really liked the story and how Roen’s character developed. I like how he didn’t become perfect right off the bat. I also liked how absolutely no character expected him to. There was no shame or attack on him for not being excellent, no-one looked down on him for having to start slow and easy. I really liked that – so many books would have had his failures or his weaknesses be attacked by more professional people or more experienced people. Instead everyone was always behind him, everyone was always supporting him and willing to help him develop. Even when he needed space and needed to back off.

The plot itself was more gentle – this is a very character and world driven story rather than a plot and event driven story. That’s not to say the story of did – but it is a very classic training/coming into his own, character growth story. It’s not bad not even close, but it’s there to showcase Roen and to showcase this excellent world.

I believe the protagonist is a man of colour… but it’s a little vague. Actually personal descriptions are pretty vague in most of this book which generally makes it hard to pin down anyone’s race or ethnicity. Roen is vaguely described once as somewhat dark skinned, possibly latino, possibly Asian or, and I quote, possibly a fan of the tanning booth. Since we’ve followed Roen around for a long time and we’d know he’s more likely to take up bungee jumping without a rope than actually go to a tanning booth, I’m going to say he’s a POC.

We have a number of background POC we have Roen’s mentor and several background agents. (ok, an Asian martial arts – I also like that Tao is very centred on Asian people and Asian history he has been involved in in the past). We have Paula who may be more prominent in future books who is Asian and some background agents who are POC. There aren’t a lot of main characters – Roen, his love interest Jill and Sonya his mentor: everyone else is somewhat background – there are a LOT of background characters on both sides – many many indeed – and several of them are POC

On Jill and Sonya – I’m really unhappy with how it ended for these two prominent female characters – I’m also annoyed there was a semi-romance in both cases and I’m really annoyed by Sonya being kidnapped (and not rescued but needing rescue) especially since the book had done such an excellent job of establishing her as awesome and skilled. Sadly isn’t this a trope? Awesome woman ends up being teacher/trainer for the more mediocre male protagonist?

There are no LGBTQ characters – background or otherwise

All in all I love this book. It has flaws – but it’s also extremely well written with interesting characters, a fascinating world and a really original concept, definitely a fun and refreshing read.