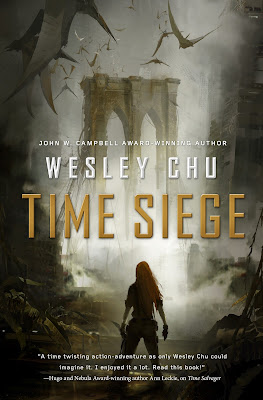 In the toxic wasteland of Earth, Elise still clings to her hope that she can cure the plague and make Earth liveable again. But that hope seems more and more as they – and their tribe – constantly have to flee from attacks from Chronocon and the Valta corporation.

But she isn’t alone, James, while struggling with his own issues, has put together a powerful alliance of brilliant minds to help them. Elise is putting together her own alliance – determined to create something better.

I love how this book portrays the dystopian world – because it’s clearly grim and awful in many many ways, but we portray this through daily existence, how everyone lives and survives every day. There’s no need for pages upon pages upon pages of melodramatic awfulness and description – because it’s portrayed by people’s experiences and what they’re used to. It doesn’t make a lot of sense for characters who are used to the world they live in to spend an excessive long time moping about it.

Because this is a book about time travel (though the focus is very much on the book’s present in this book) there is a large amount of the setting’s history present. There’s a lot of excellent references to this created history, to wars, to the conflicts between the core planets and the outer rims and the very different standards of living and histories of both regions. This leads to interesting resource conflicts – with the outer-rim planets being the most modern and luxurious but with time salvaging being the source of the most precious resources, the core planets, especially broken, diseased Earth, is the motherlode.

Securitate Kuo’s thought processes does give us some insight into the views of the villain who, like most villains, does think of herself as the good guy. In some ways it’s very well done but in others it’s just a little overdone, almost cartoonishly. She is a loyal follower of the corporations and their capitalism = everything motto. And in this dystopian solar system of dwindling resources, she doesn’t just see capitalism as the most profitable but literally the way to save humanity. She knows there’s few resources and she firmly believes in the ruthlessness of obliterating waste – including wasteful people – so that humanity may go forwards

But even through her own eyes we see that the corporations are repeating the same mistakes as the governments and non-profits she disdains so as well as seeing flaws unique to the corporations –like their inability to plan for the long term.

This is, somewhat, the underlying conflict of the books. The megacorporation have co-opted the Time Agency, they have the power and the control. They’re ruthless, devastating and view people as resources to exploit, use and dispose of. They’re cruel, they’re ruthless, they care about the bottom line only – they may be efficient, but it’s a selfish efficiency that is only focused on their own gain.

Then you have Elise and her vision. She’s kind and compassionate and her kindness and willing to share manages to win her massive loyalty from the beleaguered tribes. People coming together in common cause as they’re shown equal respect, share resources and training and expertise to form a much more respectful, honest and greater whole that, in term, is looking forward to the betterment of them all

Yet even with this we see James and many others fretting over the fact they simply don’t have the resources for this generosity, let alone to achieve their long term goals. Without the ability to jump into the past for resources, technology, weapons and even experts, the whole society would collapse over night (though, equally, it has to be noted time salvaging is a major resource for the corporations as well). The equal respect of people and voices means a thousand confusing titles and names, endless arguments and jockeying and a general slowness that leaves Elise conflicted between the principle of all voices being heard and the practicality of everything being so much easier when everyone does as they’re told.

It’s the core conflict of the books and showcases the underlying themes so well.

This book contains a large amount of exploration of James‘s alcoholism which is both horrible and painful reading while at the same time being so very accurate which is what it makes so hard to read. It is hard to see one of the protagonists of a book completely ruin his life and the plot. It’s hard to read a character do things and just sit there and scream “nooo nooo don’t do this! Don’t do this!” It’s not fun to read. It’s not easy to read. But the subject matter is neither fun nor easy either. It was portrayed as difficult and as destructive and hard as it really should be.

I also like how it builds on James’s very human flaws. It’s easy to make protagonists awesome avatars of awesomeness (with some gritty grimness around the side) especially James who is already a combat monster (but, interestingly, even this is challenged) and could very easily step into this role alongside Elise who is already incredibly skilled and awesome. But James’s very human feelings of abandonment are, again, not necessarily fun to read (it’s hard not to want to slap James) but are so very real.

On top of this we get some really interesting conflict from Levin and his reintroduction to the story and a twist there I absolutely love. I’m not going to spoil it but in addition to the ongoing debate of inclusive generosity vs strong elite which he adds a new dimension to, I love the skewering of naivety and unfounded hopes his storyline brings.

This book has a whole lot of nuance and complexity that I just love.

All of this sounds like the books is going to be really slow because there’s so many themes and nuance – but it really does move quite fast despite the huge amount of content. It feels like a big book – but it doesn’t read like a big book. It doesn’t take a long, painful time to read while there’s still so much to digest.

We also have some obviously awesome female characters. While Elise with her doubts and determination and strength and worry and intelligence and vision naturally tops the list as being incredible (almost too incredible in some ways), I have to say I love the Mother of Time more. Grace is elderly, unabashedly sexual and unrepentantly brilliant. She has no respect for anything in a truly glorious fashion, she knows she’s awesome and she effortlessly proves it every second.

Diversitywise, this book series can be hard… because no-one is described! Hardly anyone is described. At best you’ll get a description that someone is pale because they’ve been born underground or on a space colony but pale =/= White, especially when we’re considering a comment on skin tone in relation to how much sun someone has been exposed to. It’s hard even to go by surnames because this is set centuries in the future with no discernible national cultures of ethnicities we’re familiar with at all. I’ve said before that the problem with this kind of diversity is that societal default kicks in hard: anyone “could” be POC – but society is such that very few readers will see them that way.

New bit character Titus is bisexual. We know this from one throwaway line he made once about having a dead ex-husband. It’s the kind of “inclusion” where I technically have to tick the box but that’s literally all I’m doing – ticking the box but giving zero praise for a throwaway line.

This book has an excellent story, an amazing wold and with some really good characters – but above that it has really nice themes and conflicts that really adds an excellent depth