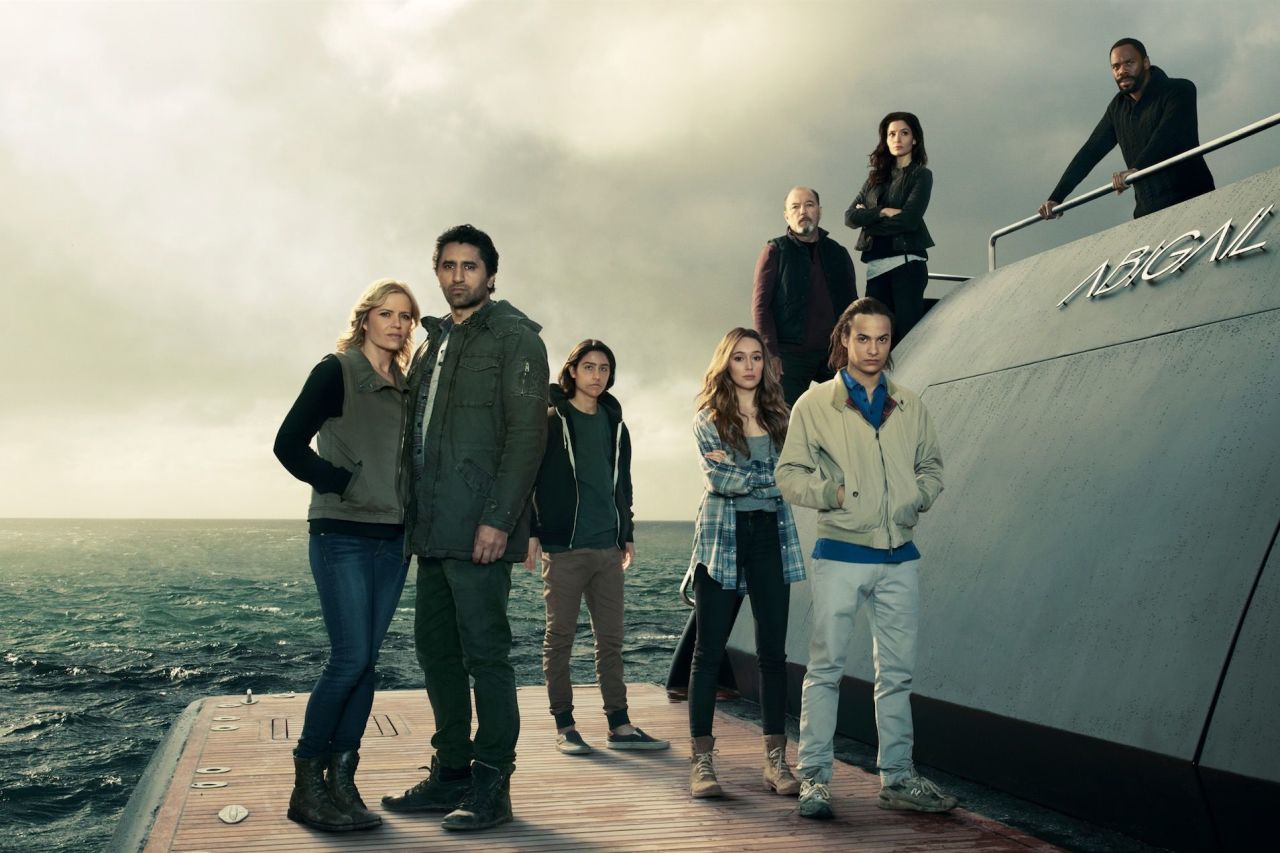 Last night, Fear The Walking Dead came back from its midseason break and it was a Nick episode. For me, Nick is absolutely the least interesting character and so I was hard pressed to pay attention to the whole thing. At any rate, let's dig in.

When we last saw Nick, though everyone was fleeing Celia's twisted sanctuary, he decided to abandon his family and walk into the flames and zombies, certain at least the smell of the zombie blood would keep him safe from the walkers.  When Nick awakes, he finds himself on a bed with Sofia standing over him as a boy named Juan plays outside.  Sofia is determined to go and find Juan's father, having decided that there are too many orphans in this world and invites Nick along for the journey. Nick however is wondering if there is room for people who think like Celia did about the dead and decides to head into the city.  Sofia does her best to talk sense into him, warning that he will encounter “la manas,” who are “the worst of men," along the way but Nick is determined to do his lone wolf thing.

Sofia provides Nick with bag of supplies and gives him directions.  Nick makes his way into the desert.  If you remember, Madison's plan to deal with Nick's withdrawal (which the show never dealt with) in season one was to take him out to the desert. Nick passes a sign indicating that it's 100 miles to Tijuana. Nick stops at a car and catches his reflection which is used to segway into the past.

Nick is in rehab playing a thumb war with a fellow resident in order to avoid dealing with how he is going to react to seeing his parents for the first time since being hospitalized. Gloria calls out Nick on his deflection, warning that should he fail to engage, the judge could potentially give him more time in rehab for being uncooperative. Nick decides to pretend to confront Madison, claiming that because of Madison's work as a school counselor she's better able to understand but Gloria refuses to let him off the hook and makes him speak about his father. Yes, it's officially time to deal with Nick's daddy issues.  It seems that Nick feels that his father was emotionally distant and it upsets him to the point that he starts to cry. Nick suggests that his father is overwhelmed with the process of living. It seems that the writers are implying that Nick's father suffered with depression.

Okay, it's back to the present where Nick finds shelter and builds a fire. His comfort doesn't last however because he wakes up to a women beating him with a bat while her daughter hides in the corner.  Nick tries to explain that he isn't going to harm them but since he doesn't speak Spanish and she doesn't speak English, he's unable to convey his intent. With few options, Nick rushes out into the night but in the process leaves his meager supplies behind.

It's now daylight and Nick is back on the highway. He comes across more abandoned cars and reaches into one though there's a zombie trapped inside to take some water.  Clearly, Nick still has no fear of the dead. Even the walker going for his hand because the blood is no longer working doesn't faze him.  As yet another walker shambles towards him, Nick reaches inside again to get a radio. He fiddles with it but is only able to hear static.


It looks like Nick's luck is about to run out because a jeep pulls up filled with outlaws. They kill the walker and begin to search the cars as Nick tries to hide.  Nick's hiding place is given away when the radio loudly gives off static, forcing him to run as the men shoot at him. Nick is now back in the desert and is starting to feeling the effects of dehydration and hunger.  Nick tries to get water from a cactus leaf but finds it dry.  Next, he tries to eat the inside of a cactus but quickly vomits it back up. In desperation, Nick urinates into his hand and consumes it.

Needs must I suppose.  Night is approaching and so Nick huddles down next to an abandoned car to sleep but unfortunately for Nick, sleep means dreaming of the past.

The big meeting that Nick practiced with Gloria for has arrived.  Gloria walks off with his parents and an overwhelmed Nick approaches Madison.  Madison doesn't have a warm welcome for her son. Nick is informed by a counselor that he and Madison are going to speak privately at first. Alone, Nick's first thoughts are about the absence of his father and he questions if father simply couldn't get out of bed. Madison pauses and tells Nick that his father died in a car crash.  When she tries to comfort Nick, he pulls away.

Nick wakes just in time to find himself surrounded by dogs intent on making him their next meal. A dog manages to get a hold of Nick's leg and he uses a rock to bash the dogs head.  Nick scrambles to get on top of the vehicle but a dog grabs his pant leg opening a gash. And what should come out of the desert? Yes, a pack of walkers whom I guess were drawn in from the noise of the barking. The dogs decide to go after easier prey and attack the zombies. This of course is a huge mistake because instead of getting dinner, the dogs become dinner for the zombies. After picking the dogs clean, the herd is drawn to Nick when he moves on the car making a sound. Once again, Nick gets lucky when in the distance a car horn sounds and gun shots can be heard. It's enough to catch the attention of the small herd who head towards the sound leaving the way clear for Nick. That's the second coincidence in case you are keeping count.

With no apparent threat, Nick gets off the vehicle and makes his way towards the carcass of the dog. Nick picks at the remains like a vulture.  A single walker crawls in his direction and Nick pounces on it to remove the walkers belt to tie off the wound on his leg.

When next we see Nick, he has covered himself in walker blood again and joined a herd. As Nick shambles along, he hallucinates that the walkers are talking to him. A zombie girl tells Nick to come with them. She promises him that she will take him home.  When Nick snaps back into reality, he's sees a new sign which say that he's now 40 miles from Tijuana.

The herd makes its way down the highway and are once again confronted by the men in the jeep. They get out and start taking shots at the zombies. Nick is in the middle of the herd but cannot risk giving himself away and so he continues to shamble forward as the men shoot into the herd. One of the men actually makes eye contact with Nick. The men however outstay their welcome and become zombie food after failing to load their weapons fast enough. The man who stayed with the jeep is able to get away.

With the road warriors gone, Nick continues to travel with the herd.

What Nick doesn't realise is that he is being watching from above by a woman with two men. Luciana looks at Nick through binoculars and declares to her compatriots that he is not the one. Fransico begs Luciana to help Nick and points out that he is walking with the dead. Nick collapses on the ground and Luciana clearly considers the matter closed because she walks away.

An unconscious Nick has yet another flashback to the past. He's back in the drug house from season one with Gloria. Nick is reading from his father's book and tells Gloria that it about how,“When you hold onto something for too long, you corrupt it.” Gloria's appearance also answers a question from season one. Clearly she died after shooting up with Nick. When Nick regains consciousness its raining. He opens his mouth widely to catch the rain water.

When we see Nick is in the city at long last. First he makes his way to pharmacy witch a sign that proclaims that there are drugs there but he finds no one. Next Nick heads to a barbershop where he grabs some duct tape for his wounds. An armed Luciana appears in the door and is followed by Francisco and a third man. Nick raises his arms in surrender. They question if Nick has been bitten and with his limited halted Spanish, Nick explains that it's a dog bite.  Nick asks for water which Luciana hands over and explains that the duct tape will only make his injuries worse. Luciana tells Nick that she knows someone who can help him.

When next we see Nick he is at a medical center of some sorts. Alejandro enters the room and explains to Nick that that he could have died from the infection as he cleans Nicks wounds. When Nick responds that he wouldn't have minded that, Alejandro rightfully calls him foolish. Alejandro explains that while death is not to be feared there's a difference when it comes to pursuing it. Now that Nick is all fixed up, Alejandro leads Nick out of the room and there we see a walled in city. Kids are playing, there's a little market and people seem safe and happy.

This episode was clearly about Nick battling his demons and his will to survive though he claimed that he wouldn't have minded dying on the road.  That's pure bravdo because he clearly cared enough to find a way to navigate safely there.  Nick seems to have developed some sort of weird compulsion with the zombies as though he has replaced them and or being around them, with his drug addiction.

The problem with this episode is that rather than telling us more about this already boring character it felt like wallowing in his manpain.  I don't find Nick to be the least bit sympathetic.  I don't like the way that Fear The Walking Dead has simply washed away his drug addiction to have him fixate on something else.  I know that Nick's a beloved character but for the life of me, I cannot figure out why.

So, Nick's made his way to a new settlement.  As we know from so much time in The Walking Dead universe, finding a new settlement is not the end of the struggle. I couldn't help but wonder what is wrong with these people. They have to be twisted in some way.  At this point, I'm not sure whether or not Alejandro or Luciana is the leader.  If it ends up to be Luciana, I expect Fear The Walking Dead to miss things up because somehow in this universe a woman is never competent to lead.

At this point, everyone is split apart.  We've seen this tactic on The Walking Dead and it's been used to drag out the conclusion of a story. Terminus anyone? I suppose at some point they'll all get back together but I hope that it's sooner rather than later because I don't need to spend anymore time with Nick's manpain.