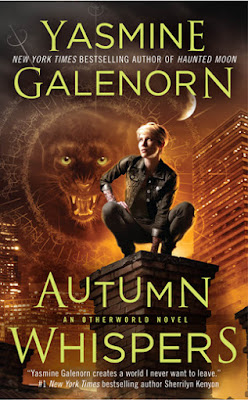 Things are never quiet for the D’Artigo sisters. They’ve been called on to find a missing fae. Grandmother Coyote has some ominous warnings for them concerning a Daemonically charged building (and when one of the Hags of Fate warns you about something you need to pay attention) and the sisters even learn more about their family history – and unknown members of the human side.

But all of that is eclipsed as the war in the Otherworld reaches new and terrible heights.

There’s so much I love about this series. I love the rich world setting. I love the many different groups on Earth and in Otherworld. I love that they all have their own histories and politics and agendas and magic and presence. I love that there’s such a huge richness to everything

I love that there’s so much effort to make even relatively minor side characters into fully flesh out beings with their own stories, their own wants and needs and agendas and personlaities

I really love the connection between these characters – all of them. There’s a real sense of family and community – both chosen family and blood kin, lovers and friends. The connections are excellent. There’s also a lot of close and meaningful female friendships – not just with the sisters, but with Iris and Sharah, with numerous women in their lives. There’s a wonderful lack of bitterness or snarling between them I really appreciate

There’s some good LGBTQ diversity. The gay male couple are vanishingly minor and only appear when the sisters want something. But Menolly is bisexual and married to another woman who she values deeply and their relationship is held up as being every bit as meaningful as those of the other sisters. Their long lost human cousins also include a lesbian couple which, while minor in this book, is likely to be more involved in the next

We still don’t have many POC considering the vastness of the cast, really the only memorable, notable POC I can think of is Morio, who is Japanese, and even he wasn’t exactly a meaningful part of this book. Yes, Trillion is dark skinned, but as I’ve said before I’m not sure if this fits comfortably as racial inclusion as he’s not really any human race- but a dark skinned species of elf; even if it is good to see supernatural creatures not all be white by default

I really don’t love Shade and Delilah. While I have said that even minor characters are well developed and have histories and agendas and a presence – the exception is Shade. Which is a problem since he’s Delilah’s love interest and a major character – but he’s hollow. I don’t even know what his shadowy-ness even means. He just is.

Which, in turn, makes the repeated sex between them in this book (with so many plot lines) feel gratuitous, unnecessary and occasionally outright callous. Stopping to have sex rather than hurrying to see if the babies had been born and the mother ok? That’s cold.

It seems nearly every book in this series I mention that there is too much detail and too much description – and sadly that continues in this book as well. Like Camille and Delilah are going somewhere so we have to have a scene where they decide which car they’re going to drive and how Delilah’s jeep is in the shop and how frustrating it is for her until they get it back – which they do. I mean, at no point was Delilah not having her jeep relevant to the story – so why was it here? Chekhov’s gun!

Every meal time we have a detailed list of what they eat. Every day we have a detailed description of their clothes. On top of that we have a whole lot of standalone stuffing – and this is the fourteenth book in this series, that’s a lot to stuff and it’s a little convoluted at times (like when Delilah feels the need to describe the curvy hotness of her sister which isn’t weird At All).

This is a problem because, as I mentioned, there’s a whole lot going on in this book. We have Iris and Shannah with their respective pregnancies and babies. We have the world changing happenings with the Elven kingdom. We have the sister’s facing family drama with their father. There’s a missing woman to find. There’s a building with Daemon energy to investigate. There’s Menolly’s bar being destroyed and the fallout from that. And then there’s the long lost cousins of the D’Artigo sisters turning up. That’s a lot of storylines to fit into a book even when you aren’t describing what clothes everyone is wearing and recapping 80 squillion books where of story and world building.

In fact, it’s so much that I think there were too many storylines – some needed to drop. The D’Artigo cousins? Even the missing person? Probably not necessarily plot lines given everything else packed into this book. I don’t think either of them, especially the human cousins, actually added anything to the plot. This is especially the case when the book ends without any real conclusion. All of these storylines are either unresolved or just kind of fizzle out, presumably to be picked up another time. I was actually really surprised when the book ended because there was no ending. It was one of those moments where I actually checked to see if I’d somehow lost half the book.

This is always my issue with this series and it’s just getting worse with each book. There’s too much here, too much to fit in one book, too much to cover it all and still move the plot forwards and keep everything together and covered. Some triage is needed. Maybe spreading over several books – have one book focusing on each issue, or have some spin off series. All in one place is just too much and the series is suffering for it.