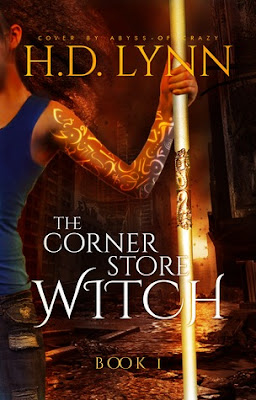 Despite considerable parental disapproval, Leone runs her own comic shop. She’s a geek and she’s gleefully happy as such along with her friends Courtney and Shadi

But even in their geekiest dreams, they never expected and actual dimensional traveller to fall from the ceiling, carrying a magical staff

Soon they find adventures and dungeon crawls are so much more fun with 20 sided dice than they are in the real world, with oni, dimension hopping and ominous prophecies promising troublesome side quests

I feel that this book is a prequel to the greater story. Clearly the meat of the story is going to happen when Leone, her sister and her friends reach Abinar’s home. This means this whole book kind of feels terribly rushed to get to that point.

We have Abinar drop in from the alternate world and everyone… kind of just runs with that. People seem to accept it extremely quickly. Yes someone just appearing from nowhere is a little odd – but “he’s a wizard from another dimension because of how he’s dressed” is a bit of a stretch. Especially since absolutely no-one really asks him questions – not where he’s from, not why he’s there, not what he wants – they just kind of take him in.

This whole part of the book is frustrating, they take him home and play D&D – we’re establishing the geek credentials of the cast, but someone just appeared from nowhere and you decide to play tabletop RPGs rather than ask him any questions at all? It just makes no sense

The whole story for a large chunk of this book feels forced as we’re desperately railroaded to the other world. Abinar Just appears, they don’t question him. Leone feels the need to take him home and keep him with her (why? She knows nothing about this guy!), which means she happens to be nearby when the bad guys show up, drop the markings of the Chosen One on her which leads happily to the prophetic dream with a nice guide on what to do next.

It kind of makes Leone not a very compelling character. She is certainly rare in the genre, a Black female protagonist and a Black female geek as well – geek culture is universally presented as white, straight and male – to have these very very very geeky Black female friends be central to the story is excellent. I like a lot about her – but so far her abilities and drive come from the woo-woo. I think it will be a lot lot lot better with future books because then we would be following the story for where the author wants to take and then get to see a whole lot more of her personality (and, don’t get me wrong, I like what I’ve seen so far but I would love to see more of her when she’s not scrambling and being driven by the plot itself). We do have some moments where Leone directly addresses race… but they feel a little… PSA-y at times.

Once Leone and her friends reach the other world, things pick up a little more. We have some world building, and a world setting with strong Shinto and Buddhist elements which I haven’t seen a great deal. So far it’s not especially deep (it’s a little Wikipedia-ness at times) but it has only just being introduced

While Abinar‘s culture shock was completely absent, Leone and her friends arriving in the other world is much much better. You can sense how alien this world is to them, how utterly out of their depth they are and how quickly they need to adapt. The action and the plot line pick up, we have more explanation, the pacing works and the whole story develops into something a bit more interesting and compelling. This is why I say again that I have more hope for the next book with Leone knowing what she’s doing, Leone starting to follow the quest (and I love the snarky, almost 4th wall breaking asides with the very DnD aware geeky characters. And, honestly, I would LOVE a story with geeky characters yelling “damn random encounter!” “not another bloody side quest!”).

It also allows us to see the group’s individual qualities. I like Maya with her gentle yet strong personality and her insight as a Japanese woman in the world setting (somewhat clumsily mentioned). I really like Leone’s twin sister Lakeisha – because she is so very different from Leone. And, yes, there are actual tensions between them because they are very different – but she brings very different skills to the group as well as her and Leone generally caring for each other. We also have Shadi, an autistic Black woman who has excellent memory and other skills to add to the group. While her autism definitely affects her character, it doesn’t mean she isn’t an asset or that she’s a burden to the group as so many depictions of autistic characters are. And while she is intelligent – she doesn’t follow the “savant” trope as well. Still, what we do have are some brief finger-sketches of each characters which promise more from the future than we have at the moment

The group could works really well together, all woman of colour, many of them geeky with a range of skills and talents and relationships – but I do think we could do with less unnecessary sniping between them. No they don’t have to get on all the time, but there’s a bit too much snapping especially since the idea of a group of WoC with diverse skills working together is appealing and different.

Unfortunately there are no LGBTQ characters

I have to say I didn’t like this book a lot. The first half was just too slow, too confused and, I think, just wasn’t the story the author wanted to tell. The story didn’t pick up until very far into the book – by which point it improved. So, I’m not a huge fan of this book – but I think I could be a fan of the series, the world building and the plotting,

I also have to question the title…. Because the “corner store” matters little (and isn’t that normally a local grocery shop/bodega kind of thing? Not a comic shop?) and she’s not a witch either.