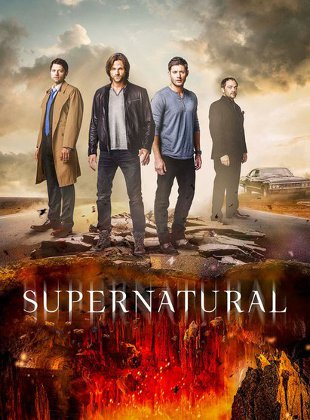 It’s the show that never ends, it goes on and on my friends.

How long will this show last? Until Jensen Ackles is no longer hot. We have many seasons left

Oooh new opening music. Is it just my love of classic rock or does Supernatural have the most awesome soundtrack?

So last season Amarra brought back Mary Winchester, Dean and Sam’s mother. On the one ide this show could use some more front and centre female characters. On the other hand this is Supernatural, the master of the very stocked fridge – and Mary has been defrosted and put back in waay too often already. I’m not eager for another fridging

The reunion between her and Dean is very touching, contains lots of emotional moments, lots of awkward moments (her seeing the Impala is both). She has a lot culture shock dealing with 30 years of being dead and how far technology has come. As well as Dean trying to explain so much that has happened in h last 11 seasons. They’re joined by Castiel who, along with the blood trail, tells them that Sam is in trouble.

This is all very nice and emotional et al but it all feels a little… slow? I mean, Sam is missing and there doesn’t appear to be a whole lot of emotion there or even a great sense of urgency

Ok, she SAYS she wants to know anything about American Hunters and their hierarchy (which I don’t think they have) so she can help. See, in Britain there are no monsters because the British Men of Letters have warded ever possible point of entry and the minute a monster shows up they go find it and kill it. Britain is monster free (this could be an interesting debate considering the number of “monsters” who are neutral or struggling against their nature we’ve seen). And they want to help the Americans make America monster free as well – and to do that they want to torture Sam lots and lots to make him co-operate

So, I’m going to say now I don’t believe her because obvious sinister character is obvious. More she even made a good point last season that Sam & Dean may have stopped the world ending several times but they’d also kind of caused all those apocalypses in the first place. Stopping Sam and Dean loose cannons would make more sense

Because this plan? Doesn’t. First of all going to the US doesn’t make huge sense because the US is so huge and relatively sparsely populated – maybe you could start in a region and spread out, but there’s a reason why most of Sam and Dean’s escapades don’t take place in Los Angeles, New York or Chicago-  they’re all in Middle-of-Nowhere Ohio or Look-At-All-the-Corn Kansas collective population your average shopping mall. Warding and rapid response seems like a big if in those conditions. If you’re going to do it why not start in another country where it could work: smaller, more densely populated: you could work your way through Europe and then have a larger stack of hunters to help with the wide open spaces of the US.

Secondly – “we want to help you we will not torture you until you let us help and oh we introduced ourselves by shooting you in the leg” is nonsensical. This is not how you get opeople to co-operate

Especially Sam who, as he points out, has been tortured by Lucifer himself. Sam is not someone you can break, not any more. Not with water or a blow torch or drugs and Lady Antonia nearly gets herself strangled trying.

But for some bizarre reason Lady Antonia decided to leave her phone number with the vet, this allows Dean to call and leave threats and menacing. Antonia continues her odd decisions by then dispatching her minion to hunt down Dean thereby giving him a way to find them because otherwise Dean has “America somewhere, presumably” as a starting point

Minion does have some shiny magical knuckle dusters. I don’t know if it’s them or skill that lets her easily beat both Cas and Dean (I suspect both – she’s just that good but also has mojo to help her with the admittedly randomly-powered Castiel). Neither stops Mary Winchester from stabbing her in the back

Remember, Mary was a hunter, from a family of hunters. She does have some angst though – but I don’t think it’s entirely “zomg I killed someone” angst but more confronting the confirmation that Sam and Dean are hunters. That was the life she left to marry John, she never wanted this for them and here she finds that they’re pretty much the epitome of hunters now. Except for the whole regularly ending the world thing. It’s a nice moment.

So now been handed an address Dean can make a plan to run to the rescue which we’re sure to pick up next week.

Meanwhile Crowley is still around following demons who are apparently following Lucifer (and still in touch with him). Lucifer is leaving a trail of bodies because Archangels can’t just possess anyone (as we saw with Archangel Michael way back when) and without an appropriate host they just burn people up. Lucifer may have survived his little event with Amarra but he’s weaker – and Crowley intends to take him down to reclaim the throne of hell. The demons find this amusing and unlikely so he kills them

Personally I just find it a little tiresome. Don’t get me wrong, I like Crowley, I like him a lot. But the whole storyline with Rowena and his utter ineptitude and disinterest when it came to actually being the King of Hell has damaged him a lot.

Ok, new season... so far I am curious but not enthused. Mary has the potential for new storylines but also a whole lot of angst and the plot has relied a little on Dubious Decision Making