Curse of the Land (Soul Wood #2) by Faith Hunter 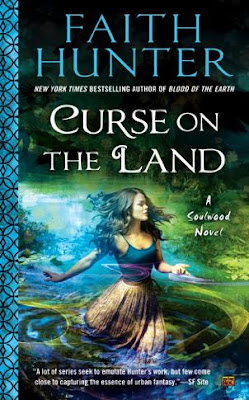 Nell has now joined Psyled as a probationary agent. Newly trained and with some useful skills beyond the arcane, it’s time for her first mission. And maybe something to distract her from the blight that has infected her own land.

But that’s not the only distraction – with Rick LaFleur consumed by his own personal problems, the team has to face a dangerous and unknown entity that is piling up bodies and could leave a swathe of destruction in its wake. Or wake up something even worse

This is one of those reviews which is pretty hard. It’s pretty hard because I’ve read book one in this series, Blood of Earth, and it’s hard for me to review this book without heavily copying and pasting from the last book review. We have the same original world building which excellently draws on the Jane Yellowrock series, expanding on it in wider and broader ways, bringing in new supernaturals and excellent world building and mystery. I also love that it’s willing to have the Unknown. It’s actually surprising in how many urban fantasy books we seem to have complete encyclopaedic knowledge of all the mysterious and hidden mystical stuff in the world. When really far more would be a mystery – it’s refreshing to see characters find a random magical oddness and instead of saying “aha, it’s a werechupacabra voudoun!” instead say “I have no idea this exists” or “we have no name for this because we never knew this was a thing!” I like that

I like the characters that come together that form Nell’s team. And I really like Neil – the way her character is so affected by her upbringing, both rebelling against it and being shaped by it as she is exposed more and more to the world around her and grows slowly as a person. She doesn’t lose her church roots – but they are just roots and don’t shape entirely how she grows.

And we have the investigation where, again, the introduction of the first book is now put into practice; we see their investigative skills in a completely non-personal investigation. We see their job examine the supernatural on a much broader level. We see Nell use her intelligence, new training, and be both the rookie and an asset to the team. I also really like how her independence means she does tend use her own initiative (and disobey) while not being the ridiculous maverick who is a ludicrous danger to the rest of her team, covered in spunky agency.

Really this book did everything I wanted it to do – it took all the introduction I loved and used it to tell the story I hoped they would, explored the world I really wanted to expand and draw on the characters that had already intrigued all while keeping it a very personal story to Nell and not running to far, too fast.

In terms of diversity, while Paka continues to be problematic – more so in fact, being a one note animalistic, mercenary Jezebel – she is nicely contrasted with Jojo who is also a Black woman, the only human on the team and the second in the command after the often absent Rick. We have a Black female antagonist as well – a corporate executive who is certainly a villain, but not in any troped way. There are also some background POC as well. We have a number of powerful women – not just her team mates but also her mother: and I love that even in the misogynist society they were raised in it’s made clear that doesn’t make all the women powerless or meek (or willing to fetch coffee for a man who is quite capable of fixing his own).

We do have a mention of two women in a relationship – but they spend the entire book unconscious.

If there’s one shaky element of the book it’s that the plot is very very twisty and a little convoluted. And since it revolves around things Nell perceives with arcane senses but can’t really define or understand, it can be damn hard to understand. Linked to that are Old Ones and then the issues with Nell’s own wood – the plot scatters around, is very abstract at times with fungus and nazi Germany and sinister corporations and circling animals and witches and old ones and earth and dark souls and dances and singers and geometry… you have to definitely be paying attention. And maybe taking notes. It doesn’t make it a bad read but it isn’t an easy one.