Blood of the Earth (Soulwood #1) by Faith Hunter 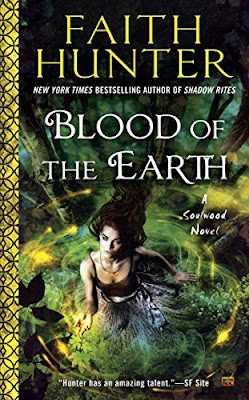 When Jane Yellowrock visited Nell, she left her in chaos. While the vampires Jane was looking for were saved, Nell was left as an outsider among her cult; one who not only had the temerity to be a woman living alone, but one who helped an outsider against her

Until Ricky LaFleur arrives, special Agent from PSYled, the supernatural investigation agency. He wants her help – and with that brings the offer of money and possible safety. Or is it just going to rile the church even more against her?

And this, as the first book in this series, does an excellent job of this. We already have a lot of the world building from the larger Jane Yellowrock series and is careful to only bring up those elements that are relevant to Nell’s story and the story as it stands now. It also really helps the greater world setting by bringing in characters, creatures and concepts that just don’t fit with Jane’s story. I like this idea because when you have a really big, rich world setting it can be really tempted to ram it all into one story and it wouldn’t work

Nell also brings in such a different viewpoint from Jane – she’s so very different from Jane that it makes for excellent potential to see whole new sides to this world (and Jane’s habit of approaching problems as things to shoot and stab things). This also allows more supernatural creatures to be introduced (like the gwyllgi which is definitely some interesting and obscure mythological research) as well as Nell’s unique abilities without crowding Jane’s life with more weirdness.

Nell herself and her nature is a fascinating concept – her connection to nature, her terrible power, her very conflict over what she can do and what she is an excellent characterisation. It also worked well with her character. As someone who grew up in a highly religious and oppressive cult, but someone who has escaped them – she has very conflicting elements to her character. She rejects her past and often hates how her past has shaped her, rejecting elements of herself which reveal she’s a “churchwoman”. At the same time she has been shaped by her past – her opinions, her experiences, her lack of education are all directly shaped by that church past. On top of this she has lived in such an isolated state that she is often shocked when she sees more of society outside of her very isolated circumstances. Her constant surprise by simple things like men making coffee and doing “women’s work” does far more to emphasise how utterly misogynist her upbringing was than any amount of rants or condemnation

At the same time I love to see how she breaks the stereotypes. She speaks up, she fights against people telling her what to do. She guards her space fiercely and she’s intelligent. This particularly is really good, because just because she’s uneducated doesn’t make her stupid, nor does it make her incapable of logical deduction – which is really well displayed. Not just her intelligence, but the classist prejudice of those around her who are shocked by the fact she can’t

On a closer level, the world building also nicely reflects this complication. It would be easy to point to Nell’s former cult and declare it evil – especially since it’s certainly led by some very evil gross misogynists. It would be easy to just have them all universally demonised, or even to have a good faction and a bad faction. But we don’t. The good faction are certainly not flawless and sexism still deeply covers them, some heroes from Nell’s past are far from heroic as we learn more about them. The women of the church are not all silent and weak – they face a lot of vicious oppression and hate and vile misogyny but that doesn’t mean they’re incapable fighting their own corner, or are meek or ignorant. Oppressed even being victims doesn’t remove their capacity or their will.

Alas, the bad side is we bring back Ricky LaFleur, the character I have repeatedly not liked in the greater Jane Yellowrock series so I wasn’t exactly happy to see him back. But the team he has built – including 3 women and 2 Black women. There is an interesting juxtaposition of Paka – a wereleopard, more than a little animalistic and definitely potentially problematic. But we also have Jojo who is the only member of the team without supernatural power and is the computer expert of the group. In other words, while Paka can reflect some dubious tropes Black people face, but Jojo subverts those tropes.

The only members of the team who are especially prominent is a white male wereleopard (and likely Nell’s love interest) and a white male empath. I do think everyone else will be much more involved in the future books in this series as this is a clear introductory book to the overall unit. There are no LGBTQ people.

I really like how they discuss Tegan’s empathy and how the group as a whole has to take steps around it, even considering the implications of empaths being easily manipulated – because they feel your desire or don’t want you to feel bad. It’s a nice expansion and exploration of empathy

With all this we have a nice, focused story that is perfect for a new series – it has a definite end, a definite introduction to the characters while still have an actual plot and not just being a vehicle. I liked the twists, I liked the factions – I liked the idea that it’s not just as simplistic as it first appeared. It’s a promising amount of nuance with an interesting and quite unique main character in an already fascinating and broad world.