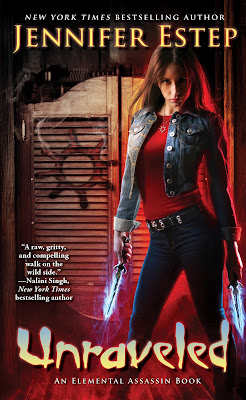 Of course, this was a resort owned by Finn’s mother and Circle member and generally not a pleasant person – and the Circle is fully involved in the resort – inevitably the Spider has to take care of business.

Two books ago I said that I was concerned with this series of books becoming very very repetitive. We had the same pattern coming up over and over again and it was starting to feel dull even if it was also extremely fun.

Last book helped reassure me and this book well and truly sealed my hope this is going somewhere new.

Sure, we still has Gin, the Assassin, killing bad people who really needs to be stabbed in the head. But previously this had a repeated pattern: a big bad would appear, they would attack Gin, she’d be terribly beaten. She’d then limp back to Jojo, be healed, make a plan and promptly murderise the big bad.

But this book doesn’t have a big bad per se. We have a powerful, dangerous woman who is dangerous for reasons beyond having big shiny dangerous magic (which is a really nice change from the rest of the books – we’d have dangerous women but they’d usually be dangerous because of shiny magic, not combat skills like Gin). But she’s not the big bad. She’s not the main focus. She is there – but the main enemy is Tucker. And not as a dangerous threat, but as a representative of the mysterious and sinister Circle. The tone of book has changed a lot. We don’t have a single big bad like Mab Monroe, nor do we have random killers of the week – we have a mysterious shadowy cabal that needs investigating, discovering and manoeuvred around.

And we have some nice digging up of Gin’s mother Eira. Ok, it is a little convenient that Gin can repeatedly dream up herself some history and relevant information, but it I do like to see the information and relationship explored. Especially since this book series seems to absolutely love skewering people who have been put on a pedestal (or… maybe more accurately it should be said mothers have been knocked off their pedestals because Fletcher is still pretty much balanced happily on his).

Of course the plot itself is Gin running around being kind of awesome, occasionally meeting crusty locals, having lots of action, and Gin generally being a crafty and scary scary lady. I also really like that she’s using her magic – yes, her actual magic. How many books do we see her running around with knives and seeming to forget that she actually have magic? So, no, we’re not going all shadowy cabal and investigating, there’s still plenty of Gin running around with knives and magic, being lethal and awesome and fun and action packed

Alas, she didn’t cook much this book – and my does this series make some delicious sounding food. Also, while this story takes part outside of Ashland, she does take several of her friends with her but hey are relatively low key. Bria, Finn, Silvio, Phillip, Owen, Lorelei are all there but they don’t really get involved in the plot much. This is the first book in my memory where we focus so completely on Gin without her friends being involved much other than vaguely there backup to support or victims to be rescued

That doesn’t leave much scope for inclusion. Silvio is latino and, after several books of completely forgetting, we finally remember he’s gay (in a one line reference that only comes up because Silvio is dropping his life to jump to Gin’s attention. Also, a running joke that he’s always typing and working whenever Gin calls any hour of the day or night doesn’t help this trope). Rosalyn and Xavier, the Black characters in this series don’t make an appearance. We do get a new Black character Ira who is a lot of fun, crotchety, a dwarf, tough, determined, fiercely loyal to the park which is his baby. I like him – but he’s pretty much going to be a one book character.

I really do like the new lease of life this series has managed. There have been several times in the series when I’ve though it’s reached the end of the line; a story arc has ended and it seemed a bit at a loss. But then we get the resurgence – we get a whole new plot line, a whole new lease of life taking these awesome characters and this excellent world and breathing a whole new direction and drive into it. With this book, this series has done it again, reborn, redriven and I’m reengaged and excited again