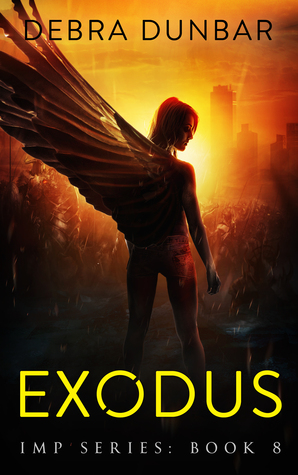 The elves are once again up to no good.  Now that they've managed to secure the blessings of Angels who simply want to be rid of the work of improving humans and hunker down in Aaru.  The elves plan to leave Hel behind and become the new rulers of earth.  Sam knows that she has to put a stop to this but what can one Angel of Chaos do?  Sam turns to her angelic boyfriend only to find that things in Aaru have gotten so out of control that he doesn't really have the time to help.  With a baby dragon living in her backyard and Wyatt refusing to house her newly acquired guests things are about to get complicated for our favourite imp once more.

I am going to say upfront that I unabashedly love this series.  I read it in one day and simply could not put it down.  I kept saying just one more chapter, then one more page, then one more paragraph until I found myself at the end.  Exodus is filled with action and laugh out loud moments.  With lines like, "Nobody destroys a tray of bacon and gets mercy, Nobody." It's impossible to read and not giggle. For the record I tend to agree with Sam on her assessment of the importance of bacon.

Sam has grown so much as a character since we first met her in A Demon Bound. Yes, she's still scrappy, with a good head on her shoulders and loves a good fight but she also has grown to care for the people who have become members of her household. Sure, for the large part these beings have been fostered on her throughout the series and they started out as an imposition but now she's not willing to risk their safety.  Even the lowly demons in her household have come to mean something to her.  At times I do miss some of the antics that she got up to but this new mature Sam is still full of great one liners which tend to fill some of the void.  I even like the way that she considers how her relationship with Wyatt has evolved.  When Wyatt refuses to help her house the elves, she doesn't push him and instead considers the fact that though they are no longer lovers, she wants to retain their friendship. Yes, our favourite little demon is all grown up.

Unfortunately we didn't get to see a lot of Sam and Gregory having intimate moments in this novel. I miss the way he used to call her cockroach.  There always seems to be so much going on this series that these two never get any downtime.  I will however say that I'm annoyed that Gregory seems to have no problem simply dropping things in Sam's lap without consideration of how he is changing her life and thus making it more difficult. For an angel, he's not a very considerate lover at all.  This is why I love when Gregory inadvertently promises a farmer to put in a word with the good man upstairs, that Sam doesn't let him foist that responsibility upon her. Other than drinking coffee and caring for Sam, Gregory hasn't really evolved much and I think it's time he begin to change as well.


At the heart of the issue in Exodus is the fact that the elves are coming to earth and a battle is brewing in heaven.  Angels can be such epic assholes with their vibrations and purity though they don't seem to be immune to Chinese food and coffee.  Gregory sees where this is going and though he has been trying to head it off, a confrontation is coming. There hasn't been a battle this big since the Angels of Chaos were thrown out of heaven and now, Gregory is preparing to do it again.  He knows that what is at stake is the loss of his home and he's desperate to hold onto to Aaru.  It's yet another sign of how much Sam has changed that she is not only willing to fight this battle with him but is also worried about Gregory losing his home. She's willing to put her feelings aside and separate from him for a time if necessary. That being said, I do wish Gregory would occasionally give a thought to how Sam feels about Hel. Sure, Hel wouldn't be pleasant to an archangel but Sam doesn't find Aaru particularly pleasant either.

Sam isn't the only character who has grown a lot.  Niylah has moved from being meek and dependent to someone who has no problem netting elves and facing down a dragon with a powerful hose. Each time she does something fabulous, Sam is amazed. It's clear that she's come to care for the young woman and even worries about how the presence of elves will effect her.  I really like how much Niylah has changed but at the same time I wish that this would shown instead of told.  I feel like we don't get to know a lot about Niylah's emotions beyond her ongoing and understandable fear of elves.

Speaking of elves, Exodus shows us for the first time that Elves aren't all the same. For the longest time, the elves were presented as mustache twirling villains in this series. I guess with a demon as the protagonist, someone had to take on the role of the bad guy.  In Exodus we learn that not only are the elves fans of oppressing humans they also oppress each other fairly regularly.  When Sam takes in elves who planned on making their home on earth she learns that not all elves are the same and many of them are honourable.  I really like the change that stratification offered to this story and it means that Sam's circle of friends is going to expand once again.

Alright, I know that I have gushed and you're probably wondering where the negative in this story is. Well, it's erased.  Yeah Lithu is in the story briefly but that doesn't say much for LGBT inclusion. There are no people of colour to speak of unless you count a dark skinned elf.  Dunbar really could do more in terms of inclusion particularly given the supernatural beings she keeps adding to the story.

I unabashedly love this series and I love this book.  I cannot wait to find out what's going to happen now that the angels have been locked out of Aaru and Sam is in search of Gregory's brother. I do know that the adjustment for angels who have never been out of Aaru is going to be hilarious, especially given that Sam is going to have to be their guide.  For as long as Gregory has been walking the earth, it's fair to say that even he's not really that acclimated.  I think that laughter and hijinks are going to ensue and Dubar cannot write book nine fast enough for me. If you are looking for a laugh out loud series this is for you. I couldn't possibly recommend it more.