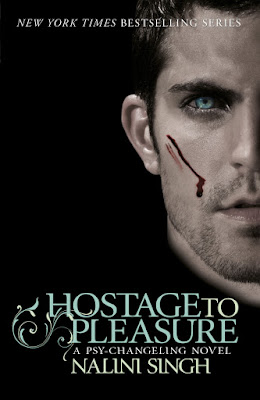 Ashaya Aleine is the M-Psy responsible for the Psy Council’s controversial new hive mind project… and she wants out. But the Council does not accept resignations and are holding her son hostage to ensure her co-operation

But whether Dark River can trust her – and how she can stay out of the Council’s clutches – is an ongoing battle, especially since Ashaya has a far more insidious threat to avoid: her sister.

There’s so much I love about it. I love the world building. I love how the ongoing debate about Silence is becoming more and more complicated and involved. I love how layered this is. Ashaya repeatedly tells them – just like Judd did before - that some people need Silence to protect themselves from their own powers. And not just the lethal powers for Psy like Judd – but from the demons in their own head. We’re repeatedly told that the Psy were tormented by psychosis, murder and suicide before Silence was implemented

Ashaya says it best – ironically for a race that is so lacking in emotion – but the Psy are genuinely terrified of themselves. With Silence fraying more and more we’re seeing consequences of that, and a lot of that isn’t good or even close to good. Murder, suicide – the Psy perpetuated and suffer from horrors while living with Silence – but Silence is there to protect them from another nightmare of horrors the whole race is funning from.

On the Council side we have another interesting reaction – with the emergence of the “Pure Psy” – as more and more Psy are breaking silence we have a push back – led by factions in the Council. Brutal and ruthless and in many ways rather trying to close the stable door long after the horses has bolted – but that’s very human nature, to throw in extreme backlash when defeat seems inevitable.

Which means we also have ongoing political shenanigans with the Council – between Nikitia and the Scotts – there’s a lot of complexity within the Psy Council without them being simplistically reduced to just the designated bad guys.

I also like the continued hints of the third race that makes up this series – the humans. Humanity, the Human Union represents a growing threat simply because they are so invisible and overlooked – I look forward to see how this develops because it would be so easy to dismiss and ignore humanity next to the supernatural power houses of the Psy and Changelings. A third faction, coupled with the internal politics of the Psy, the rebellion, the Pure Psy and the Council politics all lends itself to layers of multi-faceted storylines and world building

Especially with nuggets of world building like the fact Psy, Changelings and humans are all the same species – which is an interesting touch. Many supernatural series have the various creatures interbreed without considering what that means genetically (if you had half-elves who are fertile you’re generally saying elves and humans are the same species) – but here we have it clearly incorporated

Then there’s the dark net and Net Mind and a whole new element to what that brings – when the deeply psychic race of the Psy split their psyche’s so completely it is reflected in the PsyNet. There’s just so much to this world, so much here that I love.

In just about every book in this series while I’ve praised the awesome world building and meta plot, I have also harshly criticised the gender roles and romance plot that has sadly dominated every book

In Hostage to Pleasure I’m going to go it again. If, that is, by “harshly criticise” I actually mean “scream ‘kill it with fire’” and exorcise my tablet.

This book’s male protagonist is Dorian, the leopard who cannot shift. Way back in Slave to Sensation we saw Dorian lost his sister to the Psy serial killer. Since then he has pretty much loathes all things Psy, only making an exception for those Psy who have proved themselves by leaving the Psy-net and joining the Dark River Web of Stars.

Our female protagonist is Ashaya and she represents everything Dorian hates. She’s a Psy, she’s part of Psy-Net, she embraces Silence, she’s working directly for the Council, the source of so much evil. This is naturally setting up a classic hate-turns-to-love trope which the romance genre loves to a truly disturbing degree: because the path to true love apparently really really needs some seething hatred in there.

But, hey, that could work and come with lots of not-too-subtle lessons about seeing the actual person rather than making assumptions based on whatever.

Except that this book also combined that other most essential trope – inexplicable overwhelming lust at first sight. Which means we’re treated to Ashaya fighting her attraction for Dorian even when, literally, the only thing she knows about him is he pointed a gun at her head. She even thinks of him as “the sniper” while having fuzzy thoughts about him

But this pales next to the truly nauseating visit to Dorian’s headspace where he will describe graphically how much he loathes Amara and wants her dead while simultaneously describing how iron hard his dick is. At the same time. Even when referring to the “frigid” tone of her Silence he describes it as:

“The ice of it was a fist around his cock,”

“He’d almost shot Ashaya Aleine at first sight. Not because she was evil. Or because he’d considered her a dangerous wildcard. No the sole reason he almost put a bullet through her was because the instant he caught her scent, his cock had gone as hard as a fucking rock.”

Seriously, I could quote this and mock how nonsensical it is and how ridiculous a trainwreck we have when these two tropes collide like this – but I’m not going to because this combines into a really disturbing narrative. From Dorian we get this constant mix of hatred and lust – of describing how he would harm psy like her while at the same time referencing his erection – honestly, it feels like riding in the brain of a rapist.

That toxic mix of hatred and sexuality is utterly disturbing to read and never really addressed as we all know that he’s going to fall in gooshy love (he does) and she’s going to drop her Silence (she does) and completely accept him pushing past all her boundaries (of course) with him demanding she drop Silence and pushing past her objections because He Knows Best which all ends up being validated. I won’t even go into details now because this is the exact same trajectory of Slave to Sensation, and Vision of Heat: female Psy holds onto Silence, male Changeling decides she should drop it, she objects, he ignores her and forces or manipulates the issue then the book validates her shattered agency by making him Right All Along with a true love happily ever after. We have virtually the same lines with her telling him he’s crossing lines and him not caring,

Oh there’s odd other Changelings pointing out his aggression levels are through the roof and even that maybe she doesn’t want to be handled: and he brushes them off so they let it go. What, the book gives a nod to Dorian acting like a sex predator so then we can all move on and call it addressed?

After that it feels almost hollow to complain about the same gender roles played out, yet again. We have a female Psy who not only doesn’t have any of the combat skills we’ve seen of the single male Psy protagonist, but is expressly said to have no active psychic talents. And while Dorian is unable to shift, he is still physically far more capable and dangerous. We still have the man saving the woman, protecting her, controlling her and repeatedly violating her. This pattern is pretty heavily set by now. Even the whole concept of male changelings needing to protect women is bizarre – why do they need protecting? Why aren’t female changelings as physically capable and strong as their male counterparts? We even see female sentinels – so why this instinctive need to shelter women? Then we have Mercy, one of those very few female sentinels who despairs of finding a mate because all the men who are more dominant than her are taken – because gods forbid a woman be the dominant party in a relationship! Gender roles – out out curse you!

We do have considerable racial diversity again as is common in this series. In particular, Ashaya and her sister Amara and son Keenan are POC, we have a prominent Psy rebel Zie Zen who is Asian as well as past characters like Sasha continuing to play a role. The Psy Council is racially diverse including Henry and Shoshonna Scott who are Black and Nikita who is Asian as are the Changeling packs.

There are still no LGBTQ characters at all.

This series frustrates me immensely. I love the world building. I love the meta plot. I even quite like some of the characters. But the romances are utter train wrecks of regressive tropes that have only the loosest concept of consent all packaged with some very rigid gender roles that are just painful to read.