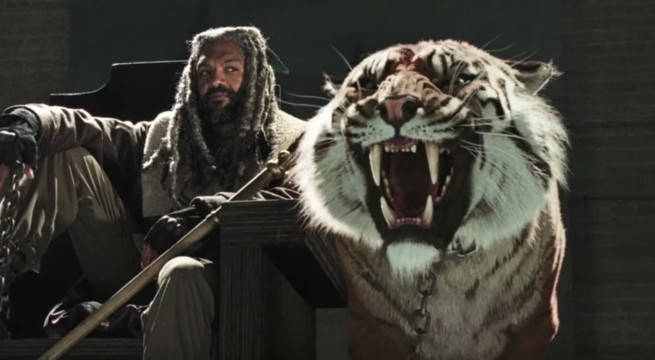 The Well is an extreme change of pace from the pain of last week's season opener.  It's centered entirely at the Kingdom, a place comic book fans are already well acquainted with.

After being unconscious for two days, Morgan takes a wounded Carol to see King Ezekiel. Morgan tries to prepare Carol about what to expect but how can one prepare someone to meet King Ezekiel and his pet tiger.  Ezekiel plays his role of King to hilt and happily welcomes both Carol and Morgan on the condition that they contribute to the community.  Carol is absolutely speechless and really, who can blame her? She quickly falls into her innocent role, a role she perfected in the early days of her residency of Alexandria and flirts. For all of the falseness on Carol's part, it's clear that these two have some serious chemistry.

The moment Carol and Morgan are outside, Carol quickly drops the act and lets Morgan know in no uncertain terms that she feels the people of the Kingdom are living in some kind of fantasy.  Morgan tries to convince Carol to wait, suggesting that they can both return to Alexandria but that's not in the cards for Carol. Carol makes it clear that Morgan cannot watch her 24/7 and that as soon as she gets the chance, she's going to grab her shit and get gone.

Ezekiel is quick to pull Morgan into his inner circle.  Morgan is taken along on a trip to gather up hogs and feed them walkers.  Morgan wants to know what going on but Ezekiel is purposefully avoids Morgans questions.  The pigs it turns out are part of the Kingdom's tithe to the Saviours. Ezekiel is clearly not pleased that he has to do this, hence the fact that the pigs were fed walkers. It's a brilliant form of rebellion.  With any luck, the consumption of enough rotten meet will make the Saviours sick. Ezekiel tells Morgan that his people don't know about the tithe and that he doesn't want to burden them with the knowledge. It's clear that Ezekiel is determined to keep the fantasy going at all costs.

While Morgan is busy with the pigs, Carol makes her way through the Kingdom talking to people, playing up on her sweet innocent act, as she steals clothing and a knife.  When Morgan does finally makes his way to Carol's room to deliver supper, he finds her bed made and Carol gone.  Resigned to the fact that he can do nothing to change how Carol's feels, he takes a seat on her bed.


Carol attempts to quickly make her way out of the Kingdom and runs into none other than the king himself.  Carol doesn't drop her guard for a moment but let's Ezekiel know that she believes him to be a fraud.  This is a big moment because Ezekiel doesn't go into denial or try to persuade Carol that her perception of him is wrong.  Ezekiel drops his royal act and for the first time in the episode we get to see Ezekiel the man.  Pre apocalypse, Ezekiel was a zoo keeper and that is why he has a relationship with Shiva.  People saw him making his way with a tiger and were drawn to him, making up stories to explain how he came to have a tiger for a companion.  Ezekiel says that the people needed someone to follow and he stepped into the role, faking it until he made it.  This isn't enough for Carol to stay but it's enough for her to consider staying close too the kingdom in a small house.

Carol clearly wants some time to herself even though she finds Ezekiel intriguing. She's very much haunted by the things she's had to do to survive and the person she has become. Faking it until you make it for now is a compromise Carol is willing to make. Carol's not in the house a New York minute before she gets her first visitor - King Ezekiel and comes baring pomegranates as a gift.

Ezekiel is a very different leader than Rick.  He's had his fair share of hardships which he makes clear by saying the only thing alive that she still loves is Shiva.  The apocalypse has forced him to become someone very different from who he is but he knows it's necessary for survival.  This is something he has in common with Rick and Carol.  Ezekiel has room in his heart for happiness and though things are dire, he's clearly a glass half full type of character. I have often thought of the comic book version of Ezekiel as a joke but seeing him brought to life with Shiva by his side has made him a far more interesting character than I thought.

One of the things that stands out most to me is the fact that he's made use of his time in community theater to help craft his persona as King.  In dystopian shows, the ones we usually see in leadership positions are former military and former cops.  Ezekiel is most certainly the exception to the rule and shows that different skill set can indeed produce effective leadership.  A politician after all has a lot in common with an entertainer.

It's clear that The Walking Dead is headed toward an alliance between the Kingdom, Alexandria and The Hilltop, since Negan poses a threat to all three groups.  It will be interesting to see how Rick reacts to Ezekiel now that he has been humbled by Negan.  More than anything, I really want to see Ezekiel remain a competent leader and not have the ending that he did in the comics.  I want to see him rise to the challenge when called and become the equal of Rick. The Walking Dead hasn't exactly been great with their characters of colour, so I know that this is unlikely but what can still hope. In the meantime, long live King Ezekiel.