Salem, Season 3, Episode 1: After the Fall 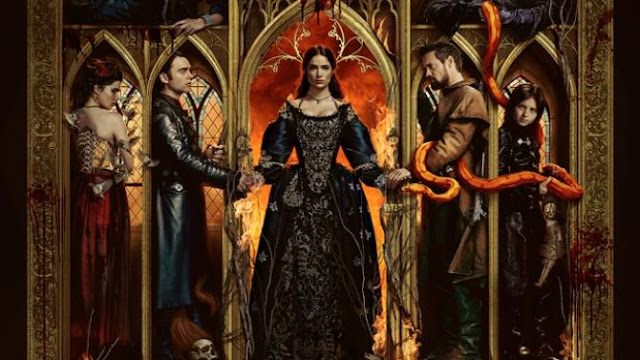 So last season loads of people seemed to die – far too many for it to actually stick without a reboot. So now the question is, who has woo-woo saved?

We also open with insects and filth and yuckiness just to remind us how terrible everything is.

First let’s catch up with Sebastian and the witches who have decided absolutely everything is awesome. Young John the Baby Devil is now in charge and makes it clear to all these witches that he is their new dictator and will murder everyone who doesn’t bow and scrape before him

Let us call this a final death knell to the original awesome concept Salem had. The idea that we had all of these extremely oppressed, helpless and suffering women who turned to magic and evil because they had literally no other choice, it was their only chance for power, for freedom and even for survival. The only chance to escape their suffering.

And now? They’re being as brutalised and more by their god than they ever were by being oppressed in Salem. Oh and the power of the witches briefly was held by Countess Marburg, a woman with so much wealth and class privilege it seemed even the misogynists of Salem were willing to kneel to her. And now it rests in the hands of Baby Devil (a very rich, white boy) and Sebastian (a very rich straight white man). We’ve not just abandoned this theme but we’ve jumped up and down on it and then ground it into the dirt to ensure it can never live again.

Sebastian isn’t happy though because Mary is dead and he’s super sad about this and drinking her blood doesn’t make up for that (of course they’re drinking her blood because why not, it’s Salem)? He’s also keeping Marbug’s body in her coffin and not helping resurrect her – so I do hope Lucy Lawless will be back at some point. Because Lucy Lawless.

Tituba is another person who is still alive – but blinded by the birds last season tearing out her eyes. Speaking of eaten eyes, last season Tituba chowed down on the seer Petrus’s eyes (because this is Salem and we have more people eating disgusting things than the average I’m a Celebrity Get Me Out of Here series) which means now, blind, she’s inherited that seery power. Using that seer power she can see that the world is officially fucked. Apparently summoning and releasing the devil is a Bad Thing and everything is now going to shit and absolutely no-one signed up for this.

More, the only way they can stop this is with Mary Sibley. Unfortunately, Mary was killed last season and we’ve already seen John bury her. Luckily magic means death can only be a brief issue. Though it’s apparently super unadvisable to bring back the dead, probably less so than letting the Devil end the world.

Which means we have Tituba digging up Mary’s body and taking her to the Essex witches (who are, like everyone else, totally pissed that resurrecting the devil hasn’t created their dream future they really wanted and instead is going to a horrible dystopian). And yes, even with Mary dead, Tituba is STILL serving her. She just can never catch a break. The Essex Witches also give Mary shit for being a “traitor” even as Tituba points out that this whole disaster is actually their doing

We do have Mercy still hanging around taking in waifs and strays, bathing in their blood to recover from injuries and brutally murdering their oppressors. Yes that theme is still there, mortally injured, staggering around but apparently still there

John Alden is still scowling around. He runs across French and Native Americans attacking English colonists and tries to intervene – apparently some of those Native Americans are also bullet-proof zombies. Because farming them for spare random woo-woo wasn’t enough. This ongoing war is creating a refugee crisis that is sending lots of fleeing colonists to Salem which is feeling overwhelmed

I’m not sure, but how historically accurate is this? I mean, colonies generally want a bigger population. And it’s not like they’re total outsiders – they’re clearly from other English colonies.

John Alden is captured and due to be hanged for reasons I don’t even remember any more, but Isaac, who has already manipulated Hawthorn to let in the influx of refugees, now manipulates the crowd to have Alden pardoned so long as he leads the Salem militia. The war is coming to Salem and, after the plague and witches and general awfulness Salem is really not ready to defend itself

John promptly… completely ignores that. Instead he teams up with Isaac to remind him that witches are the evil worst and behind all the awfulness. They need the third member of their trifecta: Cotton, who has gone missing

Cotton is with his loving with Anne – who has enslaved him by making him swallow her familiar, in the same way that Mary did with George for the first season. She did this out of desperation when he discovered she was a witch but now seems to think she can imprison him into loving her. It’s not going well – at every opportunity Cotton tries to escape and each time it’s revealed that the “freedom and trust” that Anne offers him is just a different kind of trap. It’s all horrendously messy and, as Anne angrily tells John – unlike Mary, unlike him and several others she’s never had a choice about witch craft. She was born a witch, she’s never been able not to not do magic and if she’s had any choices, it’s between terrible things and even more terrible things. Anne has pretty much defined rock and a hard place

One of those terrible things is apparently being considered a deputy to Baby Devil and her hope for a happy future just looks so messy. Especially since Sebastian is in favour of killing Cotton as soon as possible

Meanwhile, Baby Devil gets a visit from his brother – apparently another Fallen Angel who isn’t quite on Baby Devil’s side yet.