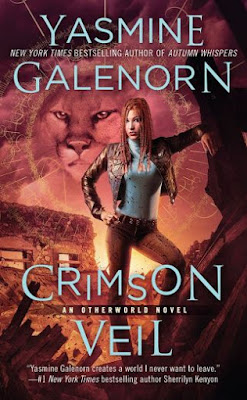 But the D’Artigo sisters cannot focus on the tragedy and devastation in Otherworld. A Daemon cult is trafficking slaves and attempting to invoke a demigod of vice and corruption capable of unleashing utter devastation across the city. With vampire businesses targeted as well, the D’Artigo sisters have to act – they have no time to mourn; not for their father, not for the dead of Elqaneve and not for those who died in Menolly’s bar.

This book is pretty much a continuation of Autumn Whispers, the last book. So much so that they almost feel like one book especially since Autumn Whispers ended without any real ending

A lot of what I said in the last book pretty much applies to this as well – it feels like a distraction and a frustrating one at that. We have Shadowwing and his demon army trying to invade Earth. His allies are launching a huge invasion cross Otherworld. An alliance is forming to try and push them back and one of the major nations of the Otherworld has fallen. Many of the spirit seals have been lost and now need to be quickly reclaimed for fear of Shadowwing getting his hands on them, ripping over the portals and invading Earth.

And the sisters are focused on… something else entirely. There’s a possible daemon plot (daemons are different from demons), the raising of a demi-god and a kidnapping/trafficking/slavery ring as well as threats against vampire businesses and… this is all unrelated to Shadowwing and I have to ask why it is here and why are the sisters involved?

I’m not saying these events are important but they’re literally in the middle of world destroying invasion against both the Otherworld and Earth. So why is this on the sister’s to handle who already have way too much on their plate? We have Carter, the half-demon, half-titan why doesn’t he step up? Vampire businesses are being targeted, why can’t Roman take this over, since he’s the major vampire authority? Fae and other supernaturals are being kidnapped so can’t the Earthside far queens step forwards? The shapehifters?

Why aren’t the sisters trying to form their alliances against the invasion – or hunting down the spirit seals or calling on the dragonflights to honour their commitment and fly to battle. The sisters have enough on their plate without being the first responders to every single issue everywhere

This is an added problem of this book and the last book and not ending. Because we not just have this somewhat distracting side plot – but we also have it still not concluded at the end of this book. That demigod is going to be still around, some elements have been resolved but this whole side plot is turning into a metaplot all of its own.

On top of this I feel a little repetitive because a lot of my old criticisms about unnecessary recapping and description, sadly, still apply.

I also really aren’t a fan of new characters being introduced, especially their human cousin who conveniently turns out to be a spy/master thief with super convenient skills just as they need. It feels unduly convenient, far too quickly integrated and accepted and really really really we do not need more characters in this series, we really do not.

What I do like about this book is the personal relationship. Menolly’s pain over her destroyed business and her feeling responsible for those whom died. It’s poignant and sad and also really well used to develop Menolly further. We see Menolly is still recovering from a lot of the horrors in her past – her whole arc over this series has been watching her recover from this. But this book we see she isn’t completely healed, there are still elements of her that have been hurt by her past and that she still hasn’t really recovered from and by identifying them, spurred by this grief, she can work to address them. This is especially powerful with her wife Nerissa and Menolly realising how her issues are still badly affecting her relationship. I love to see how much Menolly values her relationship with Nerissa and, even with her also being in a relationship with Roman who, in turn, as a vampire can do thinks Nerissa cannot, she still values Nerissa most highly. Menolly is bisexual and Nerissa is a lesbian and their love is passionate and powerful and clear.

I have the same ongoing issues with the comparative lack of POC considering the utter vastness of this cast.

My whole issues with this book are largely issues because of my issues with the whole series. A several book distraction into a sideplot of dealing with daemons and demigods wouldn’t be a problem if the whole book series didn’t equally have so many distractions and diversions with every book. This lack of focus that has been such an issue for so long makes me much less tolerant of a several book deviation to something random and seemingly unrelated. And I leave this book thinking almost exactly what I thought about the last one - albeit with some important improvements that made it more worthwhile