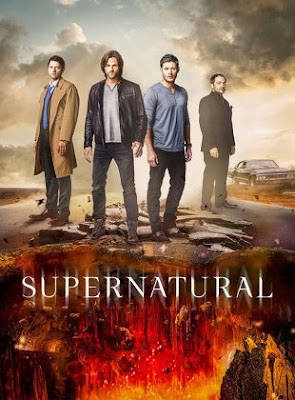 Lucifer is still out and about causing chaos – and still pursued by Sam and Dean, the Hunters, Castiel, the earnest but rather inept Angel and Crowley the sarcastic. They also bring Rowena on board after Crowley minces her latest attempt at trying to marry a rich man since it turns out he’s conning her. Splattered in blood and gore she declares it’s the sweetest thing he’s ever done for her

So what is Lucifer up to? He’s leaping from body to body, briefly causing a brouhaha by possessing an Archbishop and then a massacre when said bishop’s staff noticed the holy man unable to hold a crucifix and decided the best thing to do would be staging an exorcism

Lucifer doesn’t exorcise easily. Also, shallow moment, but is there a reason why the staff of this Archbishop are all so hot? Or is television casting so broken you can’t even have a casting call

But he leaves of his own accord to find a new host. The President of the United States

Remember last week when I asked exactly how much damage Lucifer would do in his new body? Well, we now have the president of the US, who is an unhinged, violent, impulsive nihilist with no real grasp of reality

Wait, sorry, I turned to the news by mistake, let me try again

We now have the president of the United States possessed by satan.

When the gang finds out (no surprise, Crowley has a minion on the president’s stash), they’re duly disturbed and worry exactly how they can even get near the president to combat Lucifer. Especially since Lucifer has dispatched the Secret Service against the Winchesters

Something which would be problematic if the British Men of Letter’s didn’t show up, in the form of Arthur Ketch, the fixer of the Men of Letters with a huge stash of shiny lethal toys and an extremely improbably accent. He came because Sam called – and you can’t hardly blame him. I mean Satanic President is the wor... second worst thing that could happen to the presidency.

He still wants to recruit the Winchesters on side and make up for the whole torturing and murdering thing (oopsie) he’s totally willing to lend them his toys. Which is useful because he has a handy-dandy exorcism orb. It’s shiny.

Personally, no matter how much you distrust the Men of Letters I think you really really really should tell someone that Lucifer is the president of the United States. You can’t just hope that someone will notice because he does ridiculous evil things. Unfortunately.

They still need to get to Satan though. Before he does irreparable damage

Damn it, why does this keep re-setting to the news?!

Satan Lucifer is continuing the president’s affair with his aid, Kelly Kline. Of course, like so many others, we have another television programme utterly failing to note that this is rape. Kelly is consenting to sex with Jeff, not Lucifer. No I don’t expect Lucifer to be a paragon of consent, but I do expect the show to acknowledge that Kelly has been violated.

Oh something bad is acknowledged – because Castiel’s angel radar basically does the celestial equivalent of:

But it does mean, with the help of Crowley, they can zip her out to talk to them and get her on side. Sure, it’s a hide sell – but the fact that pregnant with the Arch Nephilim means her touch actually sets bibles on fire is a pretty convincing bit of evidence. She agrees to help them ambush her

Which is also helped by a whole lot of Castiel mind control which would have been really really helpful if someone had remembered he had those powers through this season.

They stage the ambush and with both Rowena’s magic and the shiny orb – and it works. It actually works. I was totally expecting Lucifer to throw it off – but no, he’s banished and the President isn’t killed: and he will remember nothing. Problem solved! And the Lucifer storyline ended (or everyone is acting like it is – so he’s sent back to hell and can’t return? This seems kind of odd. Crowley is pretty able to zip from hell and back).

Well… nope. Because Sam and Dean are found with a confused, unconscious president by the secret service who promptly arrest them both. Oops.

While Castiel tries to take Kelly for an abortion…. But, she simply can’t do it. She declares the baby her child and flees from Castiel with her satan baby

Because on US television, a devil baby conceived in rape by deception is waaay less controversial than an abortion.