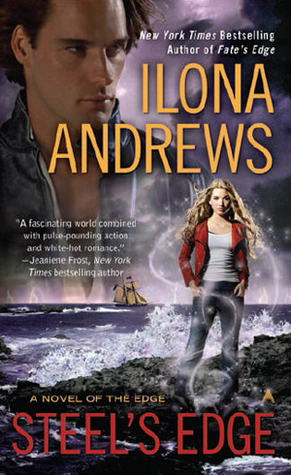 Charlotte de Ney is a Blueblood – not by birth, but as one of the coveted and precious healers she was granted nobility in exchange for her service. She has led a sheltered life – one that left her unprepared for the heartbreak of her first relationship

And the deadly lure of her power’s dark side

She tries to escape the temptation and find another sheltered, safe life… until brutal tragedy hits again and links her to the Edger Richard Mar and his obsessive quest to end the slave trade. It’s nearly impossible for her to pursue this conflict without succumbing and becoming an abomination – but sometimes more than survival is at stake

Do I start with lots of glowing praise? At what point do I say “Ilona Andrews” and you know that this review is just going to be such a glowing shining ramble of adoring praise? How many times can I say that the world building is awesome, that I really love the concept of the Weird, the Broken and the Edge, how that feeling of being between two worlds is such a powerful theme in this series, how every character so excellently epitomises this sense of not belonging, of being the outsider. Even when not directly as an Edger but so often as a side due to magic or heritage or similar trait.

I love the whole concept of healer magic – how people with such skills of healing are equally positioned to be such terrible scourges. And I love how we can present the idea of magic being out of control so well without desperately grabbing at a dubious addiction narrative.

I also really like Charlotte’s back story, her growth, her naivety and moral compass that forces her to make hard decisions, her integrity that pushes her towards both self-sacrifice and vengeance both.

I like a lot about Charlotte and how she is quite different from a lot of characters we see. She’s incredibly dangerous because of her power and certainly doesn’t need to shelter in the manly shadow of Richard (and tells him frequently she doesn’t need that) – but she isn’t an amazing warrior either, since she has led a very sheltered life – and definitely isn’t a Warrior Princess (but nor does she need a male protector – and even has Sophie be her bodyguard). She’s also a woman who is very much part of the aristocracy – steeped in manners and poise and respectability and tradition and etiquette. And she uses these skills, she treats them as a serious skill set, a skill set that needs to be honed, that needs to be learned and developed

In the genre of the Strong Female Character with Swords, these traits, these skills and these strengths are often regarded with a level of contempt (or any overt traditional femininity). But Charlotte awesomely turns them into a weapon. Without these skills, Richard’s plan to bring down the slave trade would simply not work.

But none of this is ever used to completely mask the privilege that comes with this lifestyle. From Richard’s realisation that no matter how educated he is, or how educated George is, they’re still lesser, still disrespected – eternally lesser because they’re not super special Blue Bloods. Even characters we respect don’t consider Charlotte and Richard to be a viable match. George comments bitterly on how he considers the ostentatious displays of wealth that are so impressing the Blue Bloods utterly revolt him because he can only imagine how many terribly poor people could have eaten on the cost of one of these golden plates. We see the strength of Charlotte’s aristocratic manners and skills without glorifying her upper class privilege or the injustice of it.

And can we talk Sophie? Sophie has been a minor character for a few books – deeply damaged, hurting, consumed with vengeance and self loathing and completely being torn apart by her horrendously traumatising experience when she was young. Usually there are 3 common paths to follow from here

Path 1: she doesn’t experience any real consequences of this except occasional angsty monologues or “I can’t trust people!” which exists primarily to make her The Strong Female Character or put a few road blocks on her romance path
Path 2: She meets a man and after some resistance his magical penis magically heals her issues and she is fine.
Path 3: She pursues and epic path of vengeance, achieves it, realises vengeance is hollow blah blah now in love with a guy.

Sophie is not set up for romance, at all. Her experiences have deeply shaped her life. She is hurting, badly and just because she’s been driven to learn to fight for it doesn’t reduce her pain to an origin story… and she is also approaching *gasp* therapy – yes actually healing based on treatment!

I also really like George and Jack and how their story has grown along with these series as the main constant, they’re fun and manage to be a linking factor without being an all-powerful affect and without them being the protagonist – it’s such an excellent idea to link the series.

Oh oh oh and in a series that so often deifies family, many of these books also refuse to put individual family members on a pedestal, with betrayals and failings. Oh and even with a happily ever after, not everything works out perfectly without super magic healy perfection

All of this goes with the usual awesome Ilona Andrews writing, the excellent balance between world building, action and plot and character development. It’s a joy to read, this series is a joy to read.

In terms of inclusion… the female characters are awesome. The calling out of sexism is excellent. The open criticism of classic masculine inability to express grief or emotion is really really excellent and a wonderful inclusion. But for other minorities we’re on shakier ground. There are no LGBTQ characters. Richard, like his relatives Keldar and Cerise are ambiguous potential POC but the descriptions are just vague… “bronze” comes up a lot. It’s another “could be POC, could be a tan, could be Mediterranean description”. Only he’s even less clearly POC than Cerise. There is a Black man who has a moderately high profile but we’d need to explore him more to be a major character

It’s a real shame about the diversity because otherwise I would be able to give me endless, undying, overjoyed, fanpoodling super praise to this awesome series.