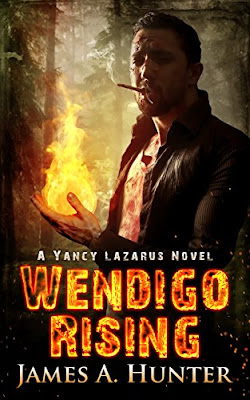 Yancy continues to want very little from life. Ribs, whiskey, gambling and a drifter’s life. But he’s been dragged into an epic secret conflict no man with a conscience could walk away from

He also cannot walk away from angry Big Feet who need his help. Mainly because they’re super fast and willing to wreck his car and his skull to make him co-operate

Despite a less than auspicious introduction, Yancy finds that the same insidious evil he has been hunting has its tentacles here as well – and the future of more than the Big Feet rest in the balance.

We know the pattern of a series like this. With every book, the current plot will feed into the greater meta plot, we will have epic confrontations each feeding into more epic confrontations to come. Great powers will be raised, will be fought and our heroes will emerge bloodied and not entirely victorious – but they will have pushed back the dark for now and emerged a little stronger, a little more powerful, and, yes a little more epic than they were before

It’s a pattern I’ve seen repeated numerous times – and gods do I love it. I really really do – so long as you can walk that shining line between the epic and the Gary Stu/Mary Sue. So long as the plot is more than just a slug fest (which this series doesn’t do that well with) and so long as the world is one epic playground in which all the awesome can be displayed – which this book certainly does do.

We have an epic world, an ever more epic conflict, lots of blood-fizzing fight scenes all with a decidedly noir bent that it actually pulls off at least 80% of the time (hey, a well maintained Noir is a wonderful and rare thing to find – but usually they try too hard). Yancy manages to be just a bit too unlikeable (there’s the gruff rogue antihero and the outright arsehole and he flirts along that line just a bit too much), but in all, all the ingredients I love are right there and this series has gone from one I was relatively indifferent about to one I will be following to the bitter end.

It also has sufficient quirks to make it special as well – I kind of love Lady Luck, the entire concept of her, her influence that always helps so very much – but not nearly as much as you’d like. Because of course, she’s bound by rules. And equally of course, she breaks them. She is Lady Luck after all. Or maybe not break, but there’s a lady who likes her loopholes

But not in this one because, again, there are just too many. Over and over and over we have fight scenes. We have struggles. And sometimes just wonder why is everything so hard? I mean the whole opening scene where Yancy meets the Chiye-tanke we have a battle. We have a long, unnecessary fight scene between Yancy and his upcoming allies and… why? Whyyyyy? And even if there was an initial misunderstanding why did we have to go full on war zone? Why is Chief Chankoowashtay the leader of his people and this incapable of communicating coherently and sensibly with people? And why in the name of all that is sensible does Yancy have to smart mouth his way through every encounter trying to provoke a fight ALL the times. We’ve said it before in relations to a lot of oh-so-strong female protagonists and it equally applies here: your character is not tougher or stronger because they can’t stop wise cracking and disrespecting everyone around them. It’s tiresome, it’s annoying, it slows down the plot and it makes me kind of dislike Yancy.

The only redeeming element of all this is Ferraro, who is awesome in so many ways. And one of the things she does so well is constantly call out Yancy for his bullshit. When he is wallowing in angst and moping, Ferraldo is there to say he is pouting and acting like an utter manchild. She is there to slap him down for abandoning her, for centring his emotion, for constantly snarling and snapping at other people, for moping. Ferraldo is repeatedly there not to coddle his precious sadness or anger or issues, she is there to drag him out and make sure he gets through it. That’s not to say she’s unfeeling, she can and often is highly sympathetic

This is a perfect counter to so much of Manpain trope we see. Yancy gets to have pain and suffer – but his pain is no more special or important than anyone else’s. When he begins to centre his pain or allow his angst or issues consume everything else, Ferraldo is there to call him out on this. And not just Ferraldo, often the world setting, the plot and Yancy’s own musings can equally step in to say that Yancy is wrong here. Even with things like epic moments in his history are made more nuanced and complex with the Sirens’ own history and explanation of their actions and position and exposing that Yancy’s complete condemnation is too simplistic

In so many ways this is excellently necessary because Yancy runs the risk of becoming a common form of Gary Stu. He has big awesome powers, he is so super important and he’s picking up more powers in this book as well. His is a trap that Harry Dresden often dips in, Atticus Sullivan just avoids and Deacon Chalk absolutely wallows in: male leader characters who are so utterly awesome at what they do that they badly need to counter their view points/power. While Yancy approaches this whole issue, the fact that Ferraldo and the world are constantly correcting him, contradicting him, setting him back is an excellent counterpoint.

Also I love Ferraldo. She is described as:

“Aretha Franklin should’ve been following her around, belting out “Respect”, whenever she entered a room”

Because that is her. With every conversation, every action, every moment in this book, Ferraldo demands to be treated as a peer, as an equal, demands to be respect, demands to be valued. She is extremely competent, very skilled, intelligent and adamantly refuses to be spoken down to or belittled. She has no magic and she is much younger than the others but at no point, ever is she seen as lesser or weaker or less worthy of insight or input. Ferraldo is awesome. Ferraldo does a lot to balance this book as well as being an awesome character.

What does annoy me is Chief Chankoowashtay, specifically the fact that Yancy, a man happily able to rattle off the names of all five fae kingdoms, simply cannot say the chief’s name and insists on referring to him as “Kong.” Especially since the Chiye-tanke themselves are very much presented as Native American analogues. They even refer to the fact they share similar beliefs to Native Americans, the clothing they were sounds very Native American inspired, they even use totem poles. That in and of itself is dubious when we consider that the only Native American person in this book is a minor character crooked cop and that POC in general do not have a particularly extensive role in this book; we see this a lot in the genre, POC culture, especially Native American culture and beliefs, is heavily drawn upon for woo-woo but rarely with any attempt to make native American people central. But to then take the Native American analogue and have the white guy not bother to learn his name is… annoying to say the least and definitely problematic. Especially, again, with such relatively slight POC inclusion

LGBT inclusion continues to be non-existant.

This book is fun. This book is exciting. It’s epic and it has some excellent characters that truly work awesomely together… but it’s also a book that is treading a lot of lines besides it’s diversity deficit. The fight scenes are fun, but are easing just a bit too much into being overwhelming. The characters work really well together – which is important because without that interraction, Yancy risks being awful. The noir theme is really effective but just a little forced at times. It all works, it all stands on that razor of being JUUUUST SHY of too much.