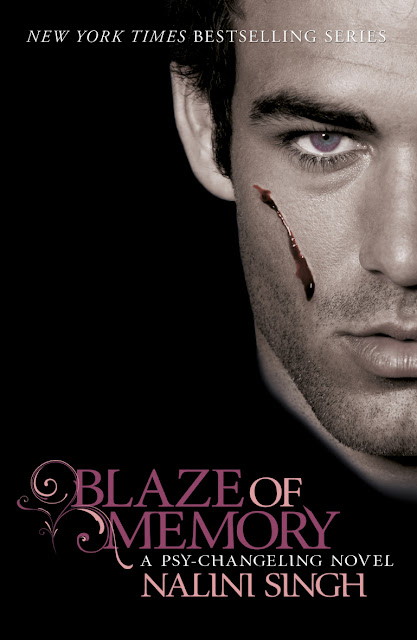 Devraj is the director of the Shine institute, the organisation created to find, protect and help the Forgotten. The descendants of those Psy who decided to resist conversion to Silence and went into hiding to escape the Council

The Council still knows about them and plots against them – so when Katya turns up on his doorstep, broken, amnesiac, tortured and blocked from the Psy Net he instantly suspects a trap

Katya is considered dead by the Psy – which makes her a perfect tool for Ming LeBon, Psy Councillor, deadly telepath and ruthless fighter. He can use her to research the Forgotten… and if not? Well, she’s disposable. But as Katya starts to rebuild herself from the ruin he left, she is determined to find answers in her shattered memories – even if it means defying Dev’s control of her.

Let’s address that perennial problem with these books – the romance. I knew very quickly in the book who the romantic partners were

Was it because of how attractive they were? No

Was it because of how compelling they found the other? No

Was it because of them simply being the protagonists? Well, yes, but not the prime reason

No, I knew they were love interests the minute Katya turned up on her doorstep like a lost broken bird in need of sanctuary and protection and healing while Dev was the big, gruff, super dangerous-oh-so-dangerous man who needed to decide whether or not she was the enemy he may need to kill.

Because for some unknown reason there are apparently a vast number people who think “damaged, traumatised woman and the violent man who may murder her” is really hot. And my gods, WHY? Why does this storyline keep happening? Not just in this series but in general?! Who are these hordes of people who are gasping “ooooh, she’s completely traumatised and facing death, such a perfect candidate for romance!” or “he’s so angry and cold and unemotional – this is so haaaaawt!” or even “he just threatened to kill her for the THIRD time! It’s getting steamy in here!”

It boggles me, it really does, that this is not only seen as romantic, but it is so often seen as romantic it has become such a prevalent trope. This is problematic in its own right – the rigid gender roles that it promotes (women as weaker, as fragile, as vulnerable, man as tough, angry, aggressive, in control, domineering) as well as the very damaging dynamics it not only portrays but encourages (male as violent, threatening, controlling, possessive) and puts on a pedestal. These are not healthy relationships. These are not relationship dynamics we should encourage. These are not a template for a happily ever after.

But it’s also, frankly, getting boring. This is the seventh book in this series. And in all but one of the previous books, this is exactly the same romance storyline. Vulnerable/fragile/broken/breaking woman, facing collapse, implosion, menace, destruction meets aggressive, emotionally distant, uncommunicative, angry, dangerous man who may hurt or kill her and LOVE HAPPENS. Sasha, Faith, Brianna, Ashaya, Talin – all have the same story with Lucas, Vaughn, Judd, Clay and Dorian. Only Mercy and Riley have a different story and it’s still not that far from it. Change the record already. We even have a moment in this book where Dev is violently jealous for no good reason and this is even lampshaded as “normally a Changeling trait.” Yet, it is – but we’ve so strongly established the idea that a man in love is 2 seconds away from axe murdering any other man who comes near that it feels almost like love can’t be depicted without it.

More annoying is that this is actually damaging to the awesome storyline of this series (beyond the fact we have to approach the storyline while skimming past a copy & paste romance). The whole complexity of Silence – not just that it’s a terribad thing that turns the Psy to monsters, but also that it’s an essential tool that made so many Psy safe. That it saved untold numbers of Psy from death, insanity and tragedy which constantly haunted their people before Silence was imposed. One of the complexities of this series is that some Psy – and the world – need Silence for survival, safety and stability. We’re beginning to see more and more of that addressed with each book, including the excellent storyline of the Forgotten, Psy outside the net and Silence, which was continued in this book. Another point it made excellently was how many of the Psy fighting against Silence are Psy who are largely not at risk for it – dangerous telekinetics, for examples, are almost unknown among them

This is an excellent point that adds such a level of complexity to the battle against silence. But wouldn’t this have been made more and with greater examination if one Psy other than Judd (a man – to keep that gender role going!) having a dangerous ability especially since he is so controlled and uncommunicative and secretive. Rather than Sasha (empath) or Faith (seer) or Ashaya or Katya (psychic MRI machines), what about a Psy who instead of saying “please don’t do that” the 8th time the aggressive Changeling man touches her when she’s told him not to, instead destroys the forest for a mile in every direction with an explosion of furious psychic energy? How about a Psy woman who could kill that aggressive Changeling man who insists on pushing her boundaries and threatening her; whose crashing walls of Silence don’t mean “ah she can have hot sex now!” but “she could kill a large chunk of the pack”. That would have advanced the story rather than repeating these dynamics so many often.

It’s frustrating because Nalini Singh is an excellent author – her Guild Hunter series is amazing. Her storylines and world building of this series is incredible, original fascinating and why I still keep coming back to this series happily because the meta plot is so excellent even when I’m having to struggle through another dull, repetitive romance. The continued development of the Forgotten, the full history of Silence, the impact of the choices the Psy have made all come together along with some excellent continued exploration of how the different Council members and Psy in general are reacting to the ongoing unravelling of their society in so many ways. There’s some really powerful exploration of Silence and which Psy got to say they could opt out and who couldn’t take that risk. It’s a really excellent plot and an amazing world. It also continues to be a series with good racial diversity: Dev is a South Asian man and that’s present and apparent in his relationship with his grandmother and his language. We refer to and include numerous POC from previous books like Sasha and Ashaya and several members of the Shine are also clearly POC. Racial diversity has always been what this series did well. The women are also capable and involved in the story once we separate them from the complete trainwreck of cringeworthy romance tropes that undermine so much of this. Sadly, there are still no LGBT characters even now.

This book follows the pattern of this series in immensely frustrating me. I love this series in many ways. I love the world building. I love the meta plot. I could immerse myself in this world for hours upon hours but every romance that is front and centre of these books is tiresomely repetitive and full of really destructive tropes.