Mind Magic (World of the Lupi #12) by Eileen Wilks 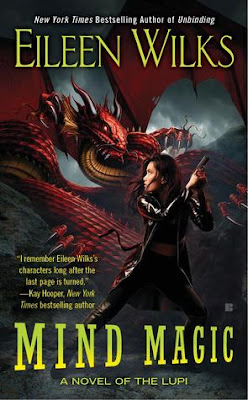 Lily’s bond with Rule is as stretched and confused as it’s ever been – thanks to the lessons she is having in Mind Speech. This is the worst time for her to disappear when she cannot be found
But Lily vanishes following up on a favour she cannot deny – while at the same time a conspiracy strikes against the Shadow Unit. The whole apparatus designed to fight The Enemy, Ruben the head of the unit, Rule the head of two Lupi clans are all targeted in a devastating co-ordinated attack.
It’s the worst time for Lily to be out of touch as everything they’ve built begins to crumble.
Back to Lily as a protagonist! I always love this focus, because Lily Yu is an awesome protagonist and one of my favourites
And, of course, I love the world building. I love the massively creative world building. I love that such a lot of originality has gone into not only designing the world with this crash of magic into the technological world, the various magical societies from the Brownies to the Lupi who all have their own cultures and magic and language all really well done together. And then we have the dragons with their completely unique biology coupled with their own culture and traditions and opinions and beliefs. It’s excellent. It’s really original and well developed and nuanced.
And I love Lily. I do love lily. I love that she’s so sensible. I love that even when worried and angry and outraged and upset and emotional she’s still logical and capable and empathetic enough to see from a different point of view. I love how she can be angry with various supernatural beings while also acknowledging that from their point of view they’re a very different beings with vastly different values. She can acknowledge that, understand that, respect that – but not by being a complete door mat to them. The fact they have a dramatically different culture doesn’t mean they’re allowed to treat her in ways that she finds unacceptable because of it.
I also like how, when discussing the history of magic on this world we’re not assuming a global constant and acknowledging that just because something happened in the west didn’t mean it happened the same everywhere
Lily’s awesome. The world is awesome.
And I really like Demi; she’s a character with Aspergers who appears to have been well represented because of it. Her need for patterns and social difficulties along with her thought patterns seem very well presented while at no point being used to make her either this alien super hero (too often autism is created a some kind of weird origin story for some kind of mental super power).  Her courage, drive, knowledge, determination, moral compass and navigating around the lupi and more powerful magical beings around her.
I also quite like the concept of the sinister government org – or some sinister human org. I mean we have repeatedly see various supernatural threats menacing humanity – but magic suddenly becomes real, there are plenty of bad people and bad organisations who are going to exploit that. Part of Lily’s worry about joining the Shadow Unit was her fear over what a unit like this could do with so little oversight. So common human greed and corruption needed to be flagged.
We continue to have excellent portrayal of POC as well – Lily Yu is Asian and informed by her culture and language. It’s more than just a description of her. The Lupi continue to be racially diverse (a leader of Rule’s guard is Jose) as do members of other organisations, the Shadow Unit, et al. Even in a book that doesn’t have that many humans, we still have some POC. We also continue to have awesome female characters – including both the awesome Lily and the Brownie’s, hilarious matriarchal culture.
In terms of LGBT people – Demi is a cis, apparently straight woman, who pretends to be a man for a while while on the run. This comes with one of the clumsiest, 101 speeches about LGBT identity labels while completely basically missing the point of anything. We also meet a bisexual Brownie, behold, a man married to a woman and a man and he’s dead. Not only is he dead, he’s the one who does, the only Brownie, of these dozens and dozens of Brownies and only the bisexual one was killed. Beware the military’s bi-hunting missiles!
My main issue with this book is that… the story is just a bit… shaky? I mean, ok, a shadowy government force in the NSA, run by this paranoid guy running an illicit secret organisation. Fine. And then he’s pretty much taken over Homeland security. And the FBI. This isn’t a shadowy organisation, this man becomes supreme shadowy king of all the intelligence services. Aren’t spies supposed to be a bit more paranoid than this? And, really, if this guy was gathering up this much power, how come none of the psychics et al (including Ruben, hello, most powerful far seer in the world ever) saw this coming?! I hope there’s something being put in place to stop ONE MAN taking over the entire government intelligence apparatus
The only thing less plausible than this is how it’s resolved… honestly I have little time for the whole “I was confronted so will try to kill you/confess everything” rather than just asking for one shred of evidence. And lo all was solved… never mind that ENTIRE government agencies were completely compromised, the US military was used to shoot on unarmed civilians?! Where’s the lawsuits? The investigations, the scapegoats rolling? It’s just all so easy. The plot line really let this book down – not so much as it was brewing the ending just felt kind of rushed and tapped on.