I Did Not Give that Spider Superhuman Intelligence (Please Don't Tell My Parents #0.5) by Richard Roberts 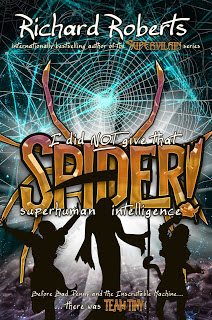 Goodnight is being pulled back into superheroing, despite being officially retired.

But when pint-sized heroes Mish-Mosh and Psychopomp drop in her lap, along with an instant chance to save the day, how could she not form Team Tiny?! A superhero team wedded to Goodnight’s firm principle

Being a superhero should be fun! To Irene this is an awesome game. Lives are at stake, some terrible people need stopping – but that doesn’t mean it shouldn’t be fun as well!

I love the quirky super hero world which we’ve seen through the lens of Penny Ack and her friends which has always been so much zany fun. And after three books of that, this book is perfect to delve a little behind all that

And lo we have this prequel which does this so perfectly

Going back several decades before Penny came on the scene we get to see the wonderful origin stories of several of the most compelling characters that loom large over the ongoing series. Not characters who are, perhaps, most involved in the books, but ones whose legends truly shape them by everyone knowing about them – like Mourning Dove. One of the good elements of the original three books is that there isn’t a lot of explanation of things that everyone knows- everyone knows about Mourning Dove so there isn’t really any need to explain her other than have her presence shadow the book. That’s well done. But it’s also awesome to see the origin behind that, the history and how she developed

And also how the city developed and how Goodnight’s visions of what super heroes and super villains should be and the whole wonderful underpinning of this series – that super heroing can be fun. That there should be rules, code of conduct, rules of engagement. That when super powerful beings clash there needs to be some rules or everyone suffers

Basically, this book took the whole underlying awesome concept of this series – the idea that superheroing/villaining is a game, is something that can be fun, is something that has rules and can be made fun and zany (especially since so much of the superhero genre seems to be loving the whole grimdark gritty) is not just maintained but explained. It’s not just random quirkiness, there’s a real history, a real reality behind this. It has taken what is a very zany, immensely fun, let’s-suspend-disbelief-and-run-with-it world and given it far more powerful structure behind it

And I love that the need for rules now has a history, a reality and much more power because of this. While at the same time examining some other excellent themes: super powered beings who are not violently inclined. Super powered beings who look different and can’t have a civilian identity. Heroes and villains who can have friendly relationships outside of their work. But even with that how it can create difficulties because people do have radically different values because they are heroes or villains. Heroes who aren’t that much different from villains or are much more extreme than them.

This makes it all sound so serious – but it isn’t, not even close. All these vital things are touched upon but the story is just fun, endlessly fun and it’s a mark of how great the story is that all of these things can be touched upon while still having a protagonist who is all about joy and glee, who dedicates her life to making everyone around her have fun and enjoy life, enjoy the game life can be. She’s an excellent character – dedicated, kind, light, fun and genuinely good without being righteously moralising. It’s so much fun, she’s so much fun and this whole book is a joy.

In terms of diversity, everyone is straight; there are several POC (one of the prominent villains who joins them) and I think one of the three major characters is a POC… but I think most of the actual major characters are either completely non-human or so altered by their super powers as to make it fairly impossible to examine what race they are. Like Goodnight, our protagonist, who is alien, with Mayan roots and who constantly changes her skin colour.